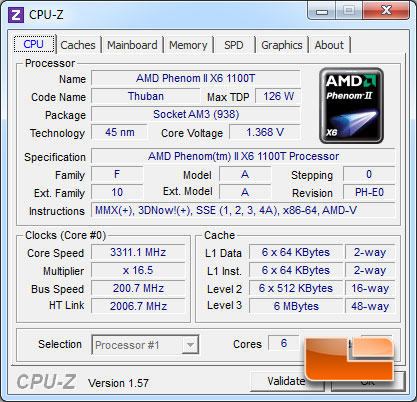 The AMD Phenom II X6 1100T Black Edition processor uses a 200MHz bus speed and a 16.5 multiplier to achieve the final clock speed of 3300MHz. Because this is a Black Edition Processor we will be able to increase the processor multiplier for our overclocking endeavor with the ASUS Sabertooth 990FX motherboard. 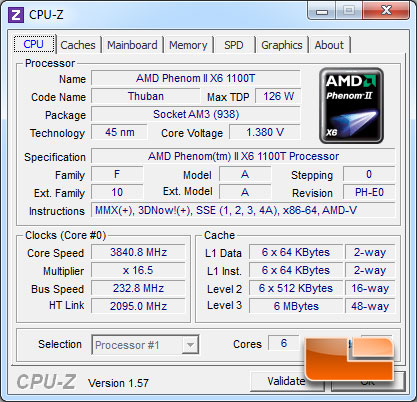 ASUS has a feature inside the UEFI BIOS on the ASUS Sabertooth 990FX motherboard called OC Tuner. It is an extremely simple feature to use. Simply highlight it within the BIOS and hit enter to bring up the menu and hit enter to confirm; it just that easy. By completing that simple little task we were able to bring our AMD Phenom II 1100T Black Edition to 3840MHz in just a little more time that it takes to boot the systems. The ASUS OC Tuner didn’t increase the Multiplier at all; it simply raised the base clock to 232 MHz. It was a rock solid overclock and a 16.4% boost with a couple of simple clicks! 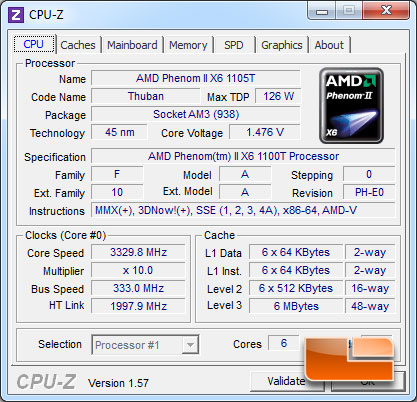 Every time that we have overclocked the AMD Phenom II 1100T Black Edition processor we have been hit with the same result: ~4300MHz give or take a couple of megahertz. This time around we wanted to do something a little different. Instead of going for the maximum overclock, we went for the maximum base clock. After raising the base clock until it would fail to post we were able to determine that the maximum base clock for the ASUS Sabertooth 990FX and the Phenom II 1100T BE processor combination was 333MHz! That’s 66.5% over the stock base clock of 200MHz.