One of the first none gaming tests that we did on the ASUS MG279Q gaming monitor was the UFO test by blur busters that is excellent at showing motion blur. This website allows you to compare up to six different framerates at the same time and you can do it with various monitor modes. This is also a quick test to verify everything is running properly at 144Hz! 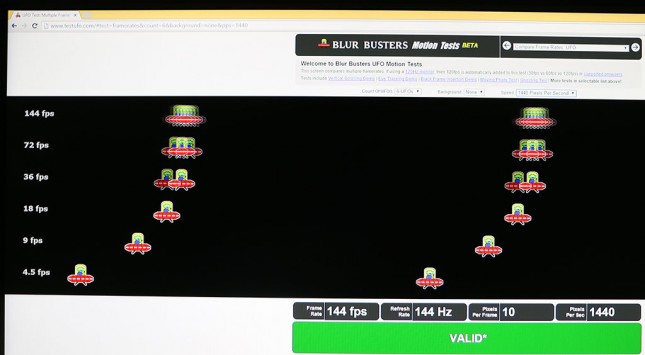 The ASUS MG279Q ran the test superbly and gave us a valid result!

We won’t to do subjective monitor reviews, so we’ll be using Datacolors Spyder 4 Elite professional display calibration tools to be able to run a series of tests to get hard numbers for quantitative assessment of the display quality. 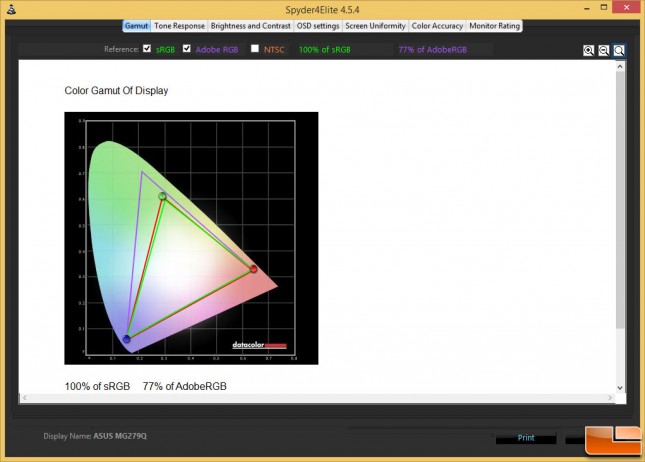 Our Spyder4Elite 4.54 colorimeter test results for the color gamut test showed that we had 100% of SRGB and 77% of AdobeRGB coverage. 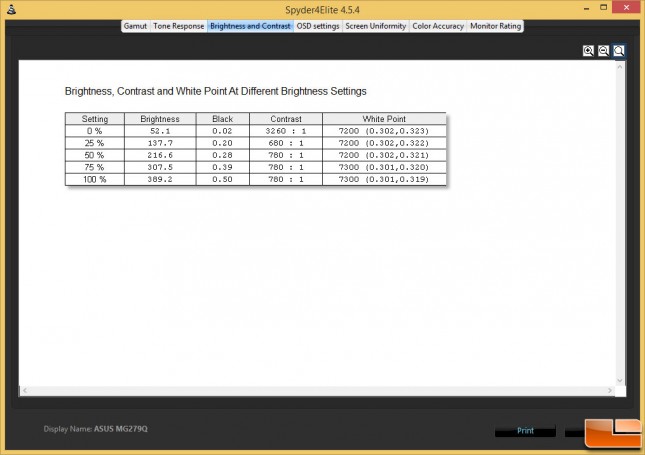 The Brightness and Contrast test results showed the display had a brightness of 389 nits and a contrast ratio of 780:1, which is an excellent result. At 100% brightness the black point was 0.50. 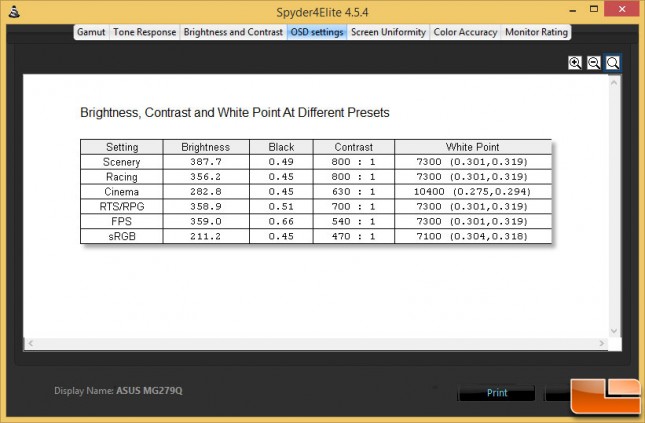 Here is a look at all of the monitors OSD presets to give you a general idea what they do. As you can see from the table above the sRGB OSD preset is the dimmest with the Scenery OSD preset being the brightest. 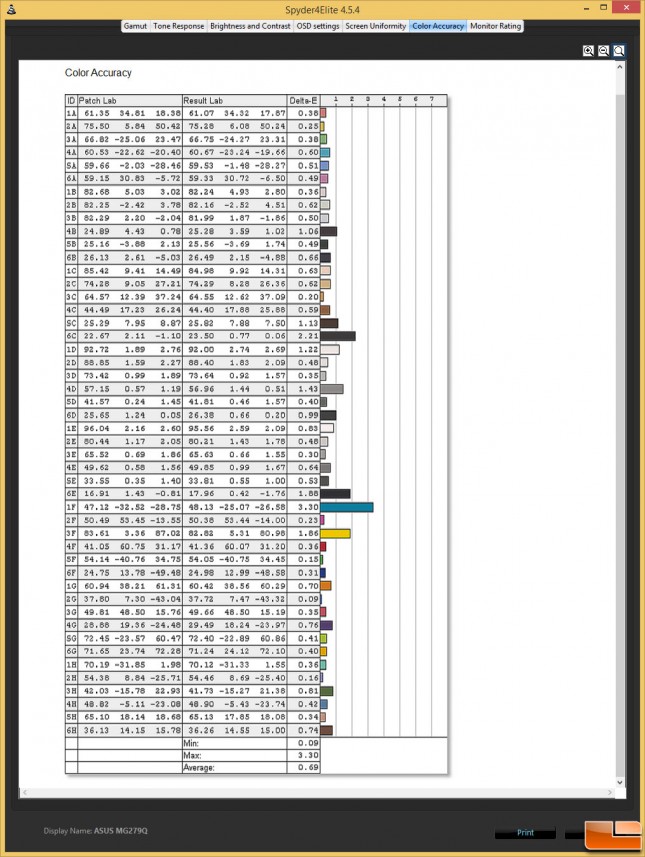 When testing the color accuracy of 48 different colors we can an average result of 0.69, which is solid result. 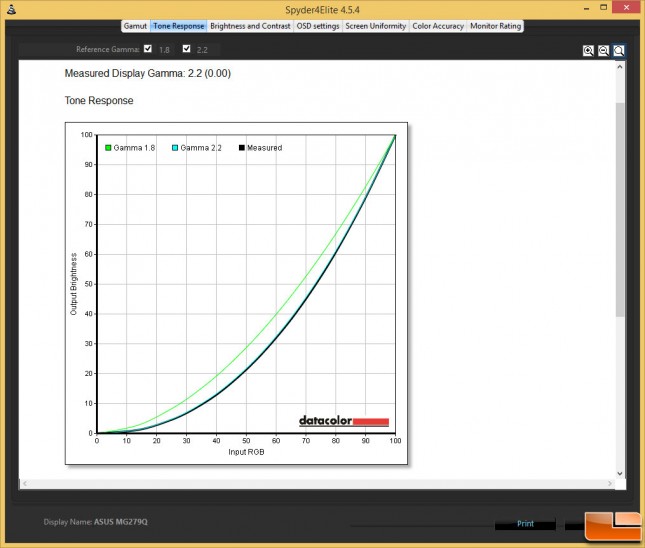 The tone response measured at a Gama Level of 2.2 exactly. 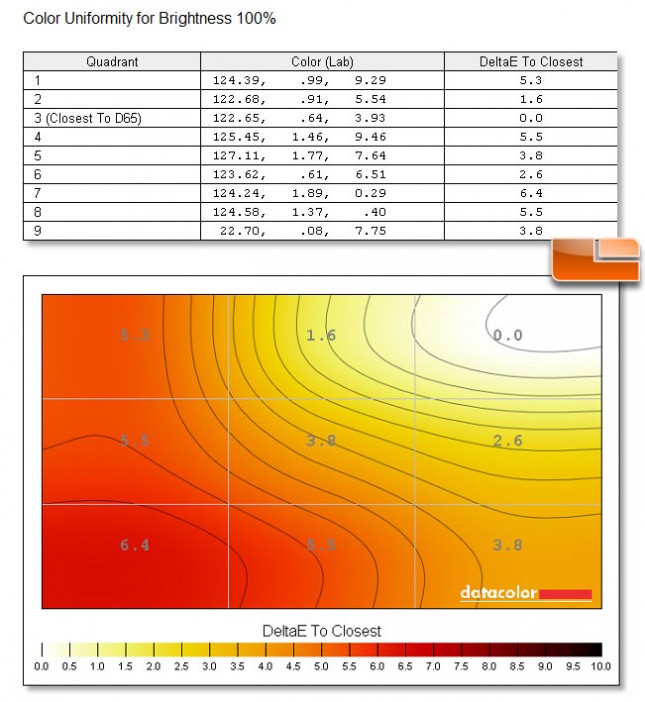 When running the advanced Color Uniformity test with the brightness of the display at 100% we see some variance on the display, mainly in the lower left hand corner. 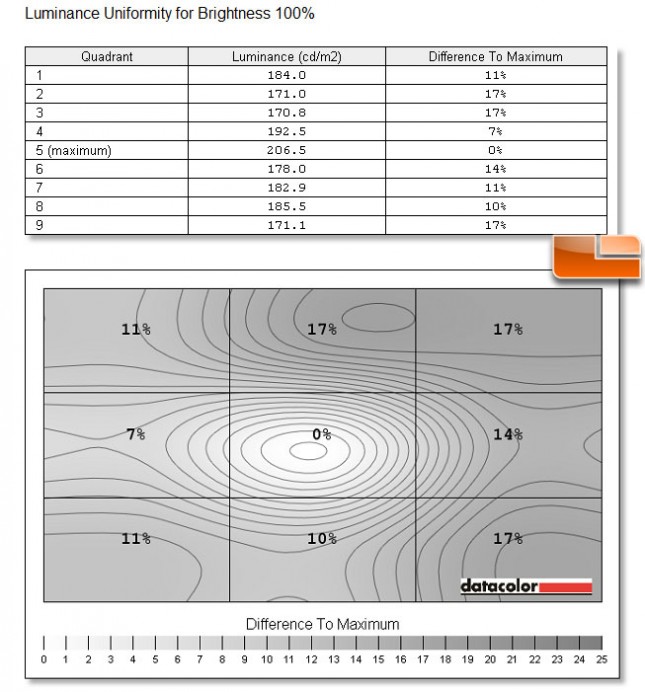 Here is a quick look at the luminance uniformity test that was conducted in the middle of nine sections on the gaming display. The brightest part of the display is the middle, which is common on most any display with one of the corners being the darkest. Some of the outside sectors were found to be up to 17% darker than the center of the display.

Here is a look at the View Info menu that details Brightness, White Point, Primaries, DeltaE, and Gamma measurements both before and after calibration. 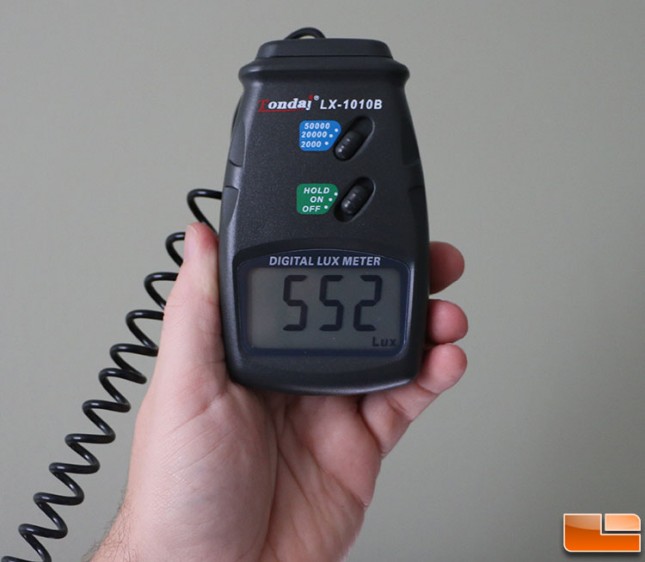 Those that are curious about measured brightness we got a measurement of ~550 lux on our LX-1010B light meter on a white background in the middle of the screen with the brightness set at 100%, which is pretty good.

ASUS claims the power consumption on the MG279Q gaming monitor is less than 0.5W in power saving and off mode and less than less than 38.7W when in use. ASUS used the 6.0 Energy Star display specification guidelines to come up with those numbers and that involves some fairly extensive math to come up with that figure. We plugged the ASUS MG279Q gaming monitor Kill-A-Watt power meter and measured a peak power draw of 43.8 at 100% brightness and then 0.3W in power saving mode.