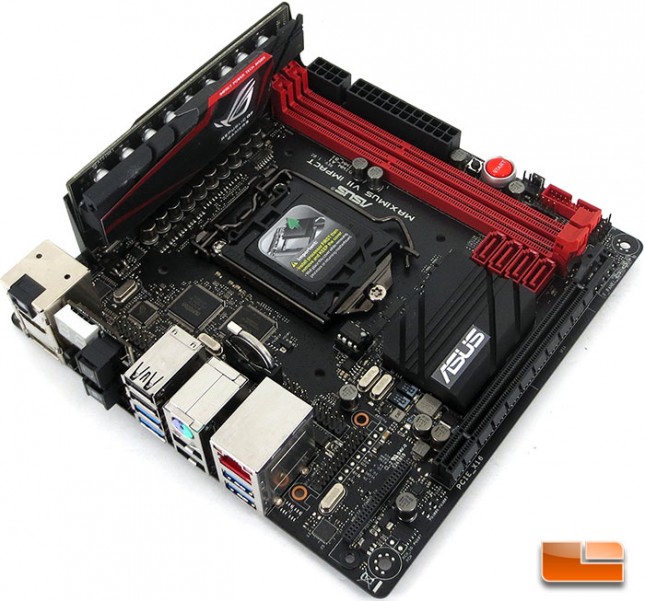 The ASUS Maximus VII Impact Intel Z97  mITX motherboard is dressed up in the typical ASUS Republic of Gamers colors of red and black. That color combination has become pretty popular recently, but ASUS has been using the red and black look on their ROG boards for some time now. Overall I like the look of the board, but when it’s all said and done, there wont be much of it visible once there is a complete system built up. 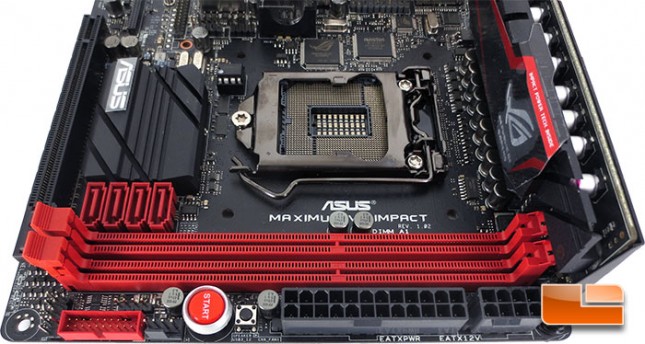 Mainly due to the fact that the ASUS Maximus VII Impact is a mITX platform, the Impact is limited to only a single pair of DDR3 DIMM slots. The ROG Impact will support up to 16GB of DDR3 at speeds as high as 3300MHz (O.C.) in a dual channel configuration. Despite the small stature of the Maximus VII Impact, ASUS is packing as much onto the board as they can in as little space as they can. Along the edge of the motherboard the 24pin ATX power and the 8pin CPU power are side by side. Having the two next to each other will help out while running wires too. Moving to the left the Impact features a reset button, power button, a 4pin fan header, internal SuperSpeed USB3 header, and finally the front panel audio header. In addition to being slightly limited in DIMM slots (number, not performance), the ASUS Maximus VII Impact mITX motherboard is also limited to only four SATA III 6Gbps headers. The Intel Z97 chipset will support more, but if you’re building a small form factor PC, odds are you wont need more than four drives. 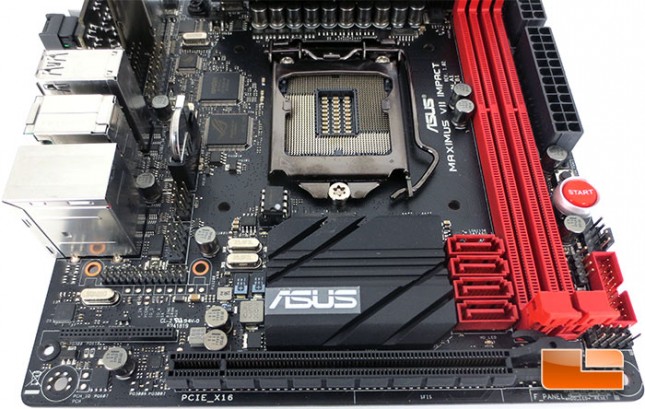 Rotating the ASUS Maximus VII Impact mITX motherboard around, the single PCIe X16 slots is shown off in it’s full glory. The PCIe X16 is a PCIe Gen 3 slot and it shares bandwidth with the M.2 slot. If a M.2 device is installed the bandwidth on the PCIe x16 slot drops to x8. 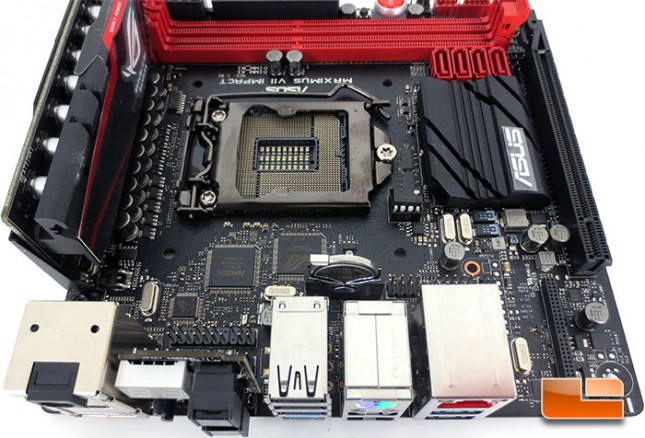 Spinning the ASUS Maximus VII Impact mITX motherboard around once again there are a number of items here worth looking at. Along the right edge of the board is the mPCIe Combo IV connector. Just behind the right side of the I/O panel there is an internal USB 2.0 header and the 8pin ROG connect header. 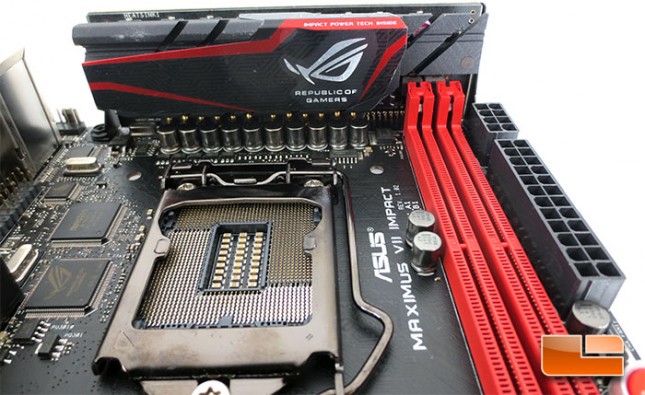 Just because the ASUS Maximus VII Impact is a mITX motherboard, ASUS didn’t want to skimp out on the power delivery to the system. ASUS is using their Impact Power II digital power system on the Maximus VII Impact. The Impact Power II features 10K Japanese made black metallic capacitors that have a lifespan five times that of standard capacitors and a 20% greater temperature endurance. The Impact Power II also has 50% smaller NexFET MOSFET’s which are over 90% more efficient and is also equipped with 60 Amp BlackWing Chokes that have a 5 degree Ceslius lower temperature and High conductivity and minimal loss power delivery.

The I/O panel on the ASUS ROG Maximus VII Impact mITX motherboard is nothing short of packed. Much of the I/O panel is pretty typical, four SuperSpeed USB 3.0 ports, four USB 2.0 ports, Gigabit Ethernet, PS/2 port, HDMI, DisplayPort and an optical SPDIF out port. There is also the Impact Control II that features the Q-Code LED, Keybot, Soundstage, Clear CMOS button, and the ROG Connect button. Oddly enough, there is no audio jacks on the I/O panel, turns out they are on a SupremeFX Impact II card that is included but needs to be put in by the end user.