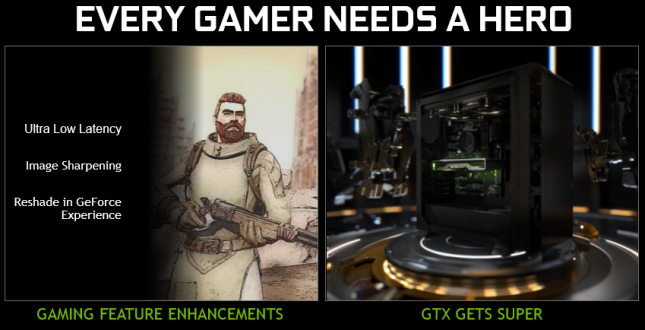 We didn’t hit on it in this review, but along with the GeForce GTX 1660 Super, our friends at NVIDIA also announced new enhanced image sharpening and scaling features, integrated support for ReShade filters into GeForce Experience, and an expansion of NVIDIA’s Ultra Low Latency Mode that allows it to work on G-SYNC displays. This just shows that NVIDIA continues to innovate and that does add to the appeal of going with an NVIDIA GeForce card over the competitors.

At the end of the day the NVIDIA GeForce GTX 1660 Super appears to be a solid card for those playing games on a 1080P display. Its 1080P gaming performance is strong on most game titles and you’ll be able to almost max out the image quality settings on every game in your library. The ASUS review sample that we received from NVIDIA proved to be a really nice card. It was silent at idle and ran really cool and quiet while gaming with absolutely no choke whine. It also didn’t use too much power and can be easily overclocked if one is looking to get a little more performance form their GPU. This is certainly one card that we would recommend to those looking to spend under $250 on a graphics card for 1080P gaming.

Legit Bottom Line: The NVIDIA GeForce GTX 1660 SUPER brings more performance and features to the sub $250 price point than ever before. This is the new standard for 1080P gaming!