This morning NVIDIA launched the GeForce GTX 1660 SUPER and GTX 1650 SUPER graphics cards. The GeForce GTX 1660 SUPER is available today for $229, while the GTX 1650 SUPER will be available on Nov. 22, with pricing to be announced on that date. These two new ‘SUPER’ cards will sit above their ‘non-SUPER’ counterparts in NVIDIAs line-up and no cards have been discontinued with their introduction. These models will slip into the lineup and offer more bang for the buck at various price points.

The GeForce GTX 1660 SUPER still uses the TU116 ‘Turing’ GPU used in the rest of the GeForce GTX 1660 Series lineup and is said to be 1.5 times faster than the very popular GeForce GTX 1060 6GB cards from last generation. Let’s dig in a little deeper and see what exactly NVIDIA has done to pull off this performance boost. 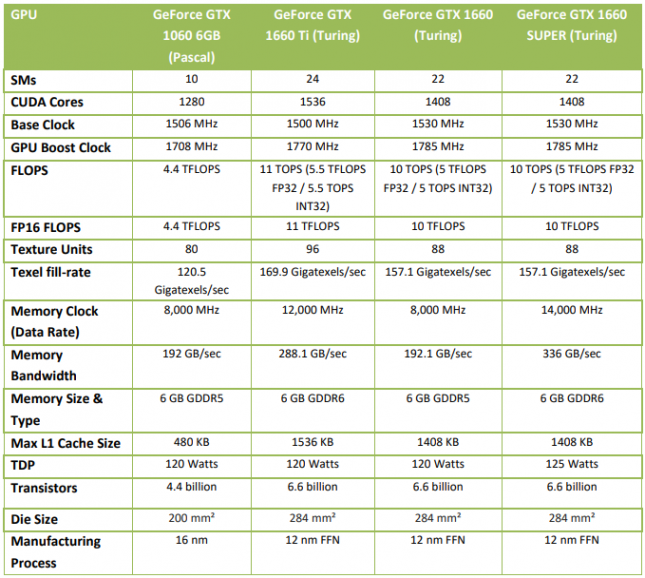 One other notable difference is that the power draw has gone up just slightly on the GeForce GTX 1660 SUPER as the TDP is 125 Watts now instead of 120 Watts like the GeForce GTX 1660. Not a big deal and both cards are made on the same 12 nm FFN manufacturing process. 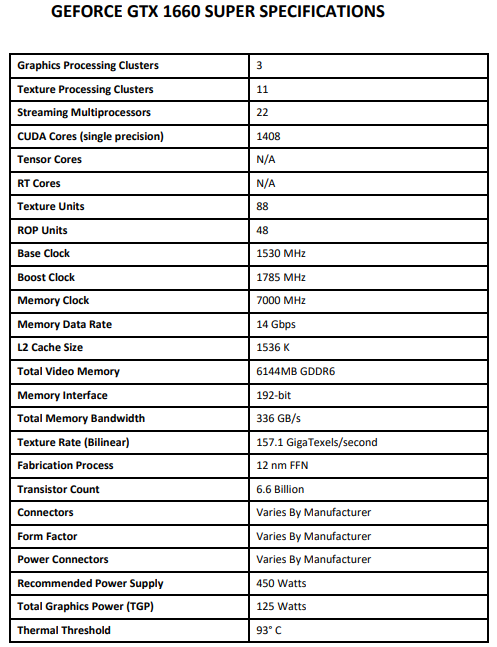 NVIDIA recommends a 450 Watt power supply for the 1660 SUPER and the power connectors on the card will vary depending on how each Add-In-Board (AIB) partner designs their custom PCB. 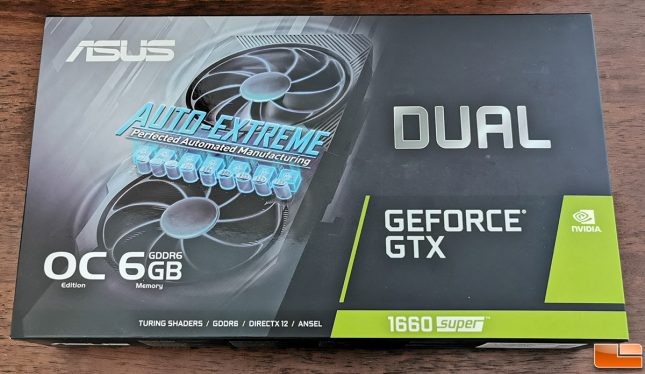 The card that we were sent to review was the ASUS Dual GeForce GTX 1660 Super. ASUS will have several NVIDIA GeForce GTX 1660 SUPER cards on the market. The base card will be the ASUS Phoenix (single fan) PH-GTX1660S-6G that runs $229 and you can step up to the ASUS DUAL model that we have with two fans DUAL-GTX1660S-OG6-EVO for $239. In the next couple of weeks you’ll also see the flagship ASUS STRIX model coming out in the $259~269 price range. ASUS also has additional 1660 SUPER cards come to market in some regions, so there is no shortage of 1660 SUPER cards from ASUS! 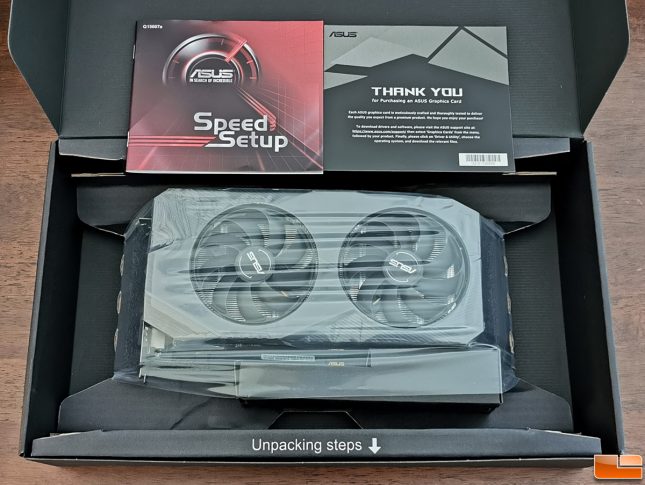 Inside the box you get the 1660 SUPER graphics card, setup instructions and a simple thank you card from ASUS. No other accessories were included in the box. 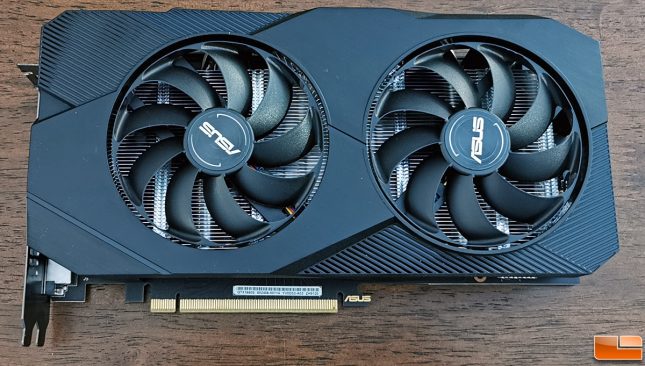 The ASUS GeForce GTX 1660 SUPER DUAL features a dual-slot GPU cooler and is factory overclocked beyond NVIDIAs recommend specifications for a 1660 SUPER. The NVIDIA GeForce GTX 1660 SUPER reference design operates at 1530 MHz base and 1785 MHz boost clock. ASUS kept the base clock at 1530 MHz, but increased the boost clock to 1830 MHz. The cards 6GB of GDDR6 memory runs at 14 Gbps and ASUS did not overclock the memory on this model. This card can also be further overclocked to a boost clock of 1860 MHz if you install the ASUS software and enable the overclock. We tested our card as it came out of the box, which was with an 1830 MHz boost clock. 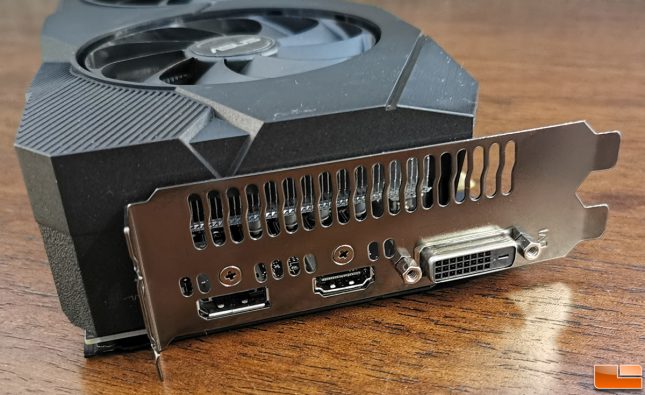 ASUS kept it pretty simple with regards to the video outputs on the DUAL GeForce GTX 1660 Super as there are just three. You have one DisplayPort, one HDMI port, and a DVI port. You can also see that this cards GPU cooler is larger than 2-slots as you can see from the image above. 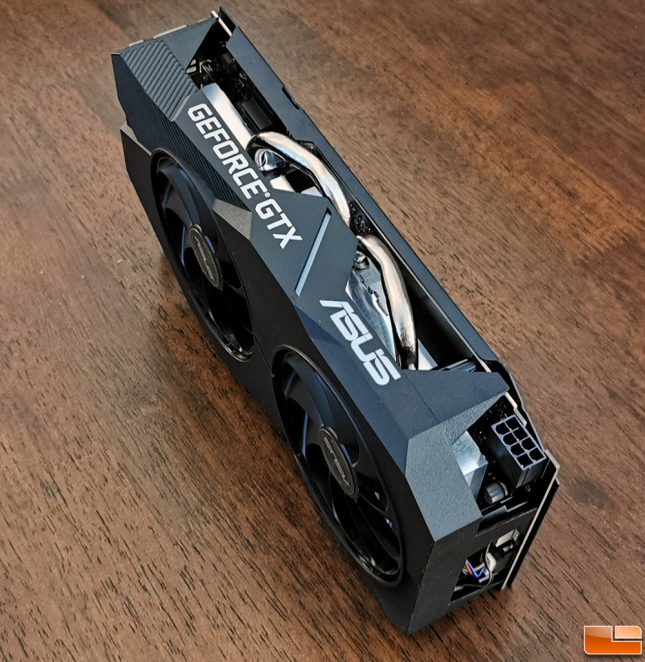 There is a single rear-facing 8-pin power connector along the top edge of the PCB. You can also see two of the direct contact heat-pipes arching over the top of the aluminum cooling fin array that make up the ASUS DirectCU II cooling solution. No gaming card today is complete without RGB lighting, so ASUS gave this card a touch of color along the top edge. The ‘slash’ between words GeForce GTX and ASUS can be controlled by ASUS’ optional lighting software. 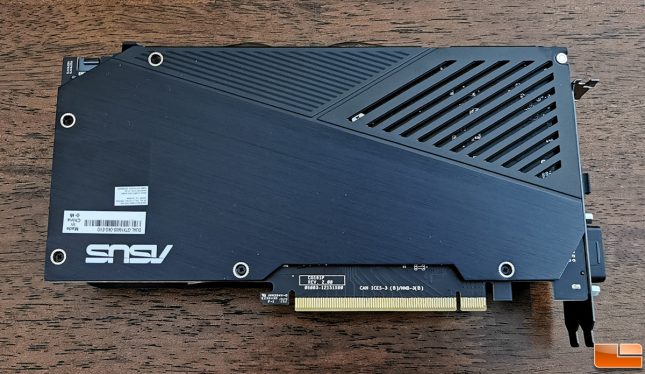 Let’s move along to the benchmarks to see how the new GeForce GTX 1660 SUPER performs!