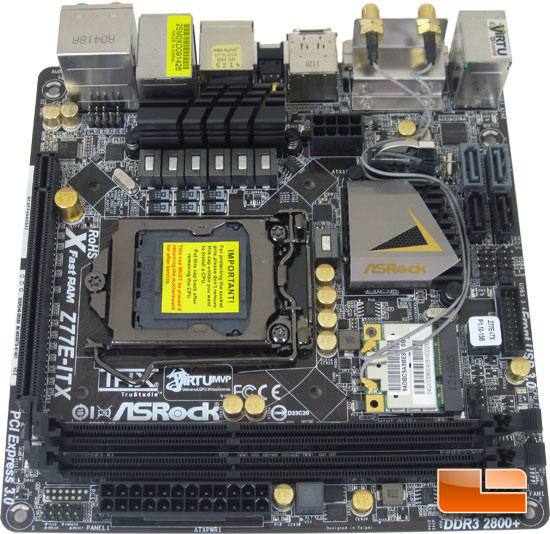 The overall appearance of the ASRock Z77E-ITX mini-ITX motherboard is quite nice. It’s not overstated or overly flashy, but it is nice looking and will look great in many cases. 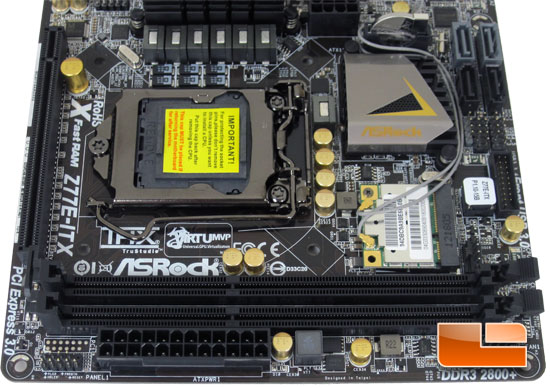 Since this is a mini-ITX motherboard, everything is packed pretty tightly. I mentioned on the front some of the missing features, and above it’s plain to see that we only have two DIMM slots. While there are only two DIMM slots, we can still run dual channel DRAM at speeds up to 2800MHz+(OC). Just below the DIMM slots is the typical 24pin motherboard power, and the front panel header for the power/reset switches, HDD LED activity light, and power LED. Next to the lower right corner (covered by the LR watermark) is the only chassis fan header. 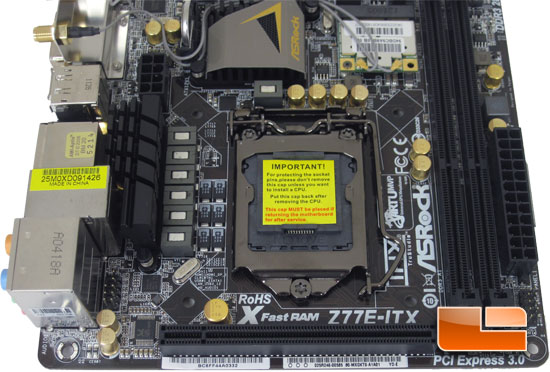 The only PCIe expansion slot on the ASRock Z77E-ITX motherboard is a PCIe x16 Gen 3. Immediately in front of the PCIe Gen 3 slot is the Realtek ALC898 high definition audio codec, and a pair of the Premium Gold Caps. 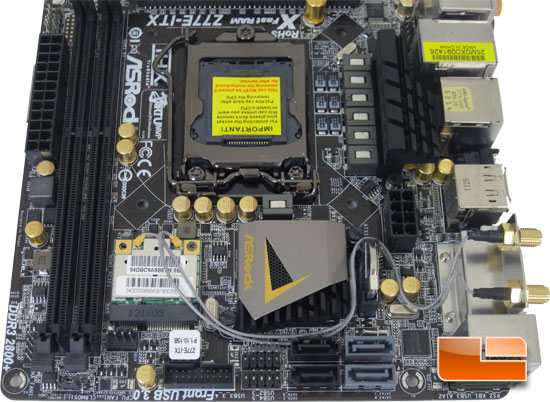 Swinging the ASRock Z77E-ITX mini-ITX motherboard around we can check out most of the internal connectors. Starting on the left side of the photo, to the left of the DIMM slots we can see the 4pin chassis fan header mentioned above, below the DIMM slots we can find the clear CMOS jumper, and the 4pin CPU fan header can be seen to the right of the DIMM slots. Just above the CPU fan header we can see the mini PCIe slot with the WiFi-802.11n module installed. Along the bottom edge of the Z77E-ITX we can find the internal SuperSpeed USB 3.0 header, a pair of internal USB 2.0 headers, a pair of SATA 2 3Gbps ports (black), and a pair of SATA 3 6Gbps ports. To the right of the SATA ports the ASMedia ASM1042 SuperSpeed USB 3.0 controller is quietly hiding. 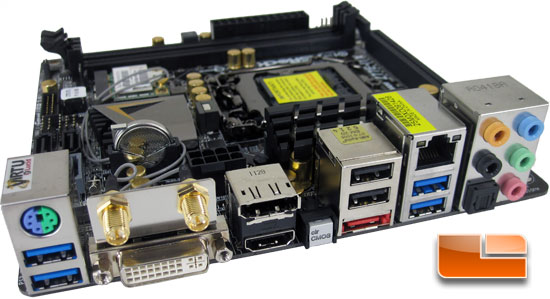 The I/O panel for the ASRock Z77E-ITX has the typical connections that we find on most boards. On the left we can find a single PS/2 port, a pair of ASMedia SuperSpeed USB 3.0 ports, DVI-I port, HDMI, DisplayPort, clear CMOS (BIOS Reset), a pair of USB 2.0 ports, eSATA (SATA 2 3Gbps), Gigabit LAN (Broadcom BCM57781), five audio jacks, optical SPDIF out. Just above the DVI-I port is the antenna ports for the Wireless N. The only thing that I would have changed about the layout of the I/O panel is the location of the ASMedia SuperSpeed USB 3.0 ports. If you don’t have the driver installed, these wont work in Windows. I was surprised to see that they work in the UEFI BIOS, but not in Windows. I would like to see the USB 2.0 ports here, it seems odd not to run my keyboard and mouse in these ports. Perhaps this is just personal preference, but that’s what I would like to see. 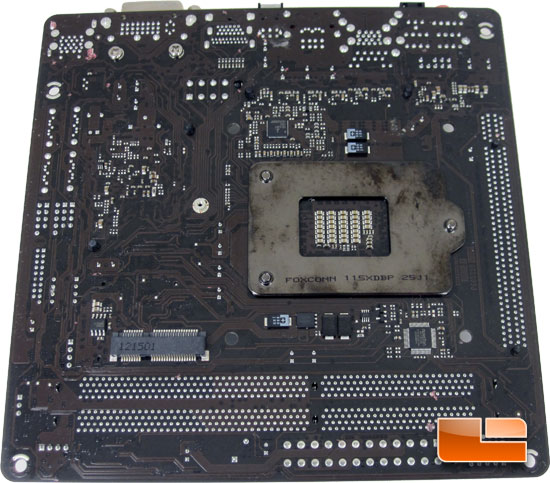 We don’t run into many motherboards with features on the back of the PCB. Today we did though, on the back of the ASRock Z77E-ITX we can find a mSATA port, this runs at SATA 2 3Gbps speeds and is great if you’re looking to run Intel SRT (Smart Response technology). 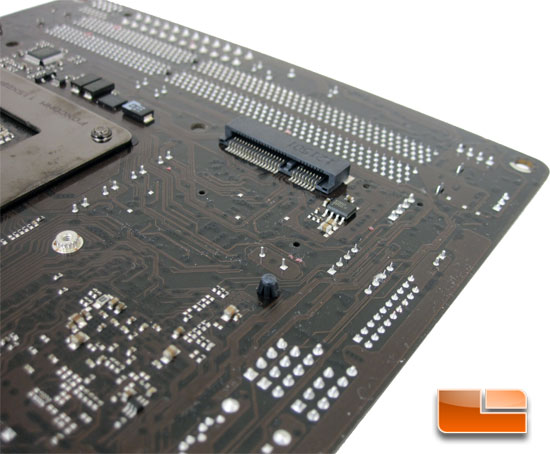 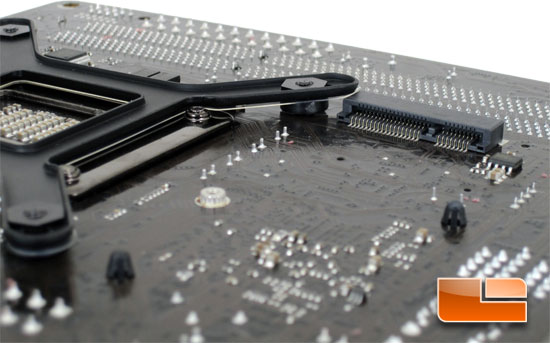 We did run into a slight clearance issue with the mSATA port though. You can see that when we put the back plate for the Corsair Hydro H100 it was resting on the mSATA port. If we hadn’t caught this, we could have crushed the port or caused some other damage. We were able to reposition the bracket enough that we were able to clear the mSATA port, but it is something to watch out for when using the ASRock Z77E-ITX.