Now that the Aquasuite 2012 software is installed and the USB 2.0 is connected to the Aquaero Xt you can start up the software. 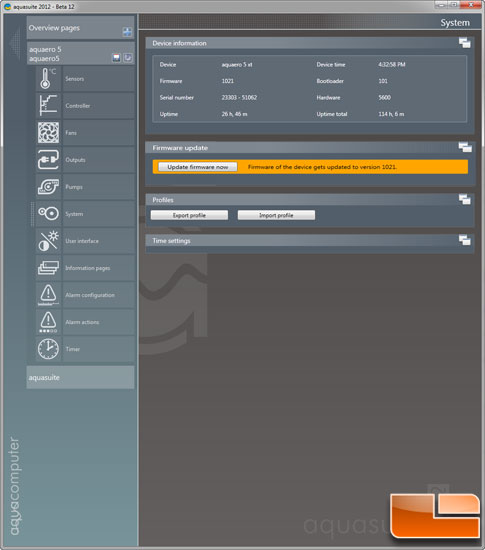 Most likely you will get prompted to update the firmware on the Aquaero as every version of Aquasuite 2012 includes a firmware update. After the firmware updates it will make a loud alarm tone and a message in German will pop up. Aquasuite 2012 will restart and you will be good to go! The instruction manual is minimal at best so we had to spend considerable time on forums and just playing around to figure out how to use the software. Once you do, it is simply AMAZING the amount of information you can get on your system.

Now that the system sees your Aquaero 5 XT you will see it in the menu list in the Aquasuite 2012 software. Aqua Computers makes other items such as custom pumps that can also be controlled for this suite but we only have the Aquaero 5 XT. We will not go over every menu item but will highlight the most important ones. Be aware that this is extremely powerful device as the menu reveals allowing you to not only have a fully automated system but can also set items like alarms that can trigger applications, shut down your PC, turn on a buzzer, etc. You can set timers to make things happen like wake up your PC, turn on a relay switch, or load a profile. 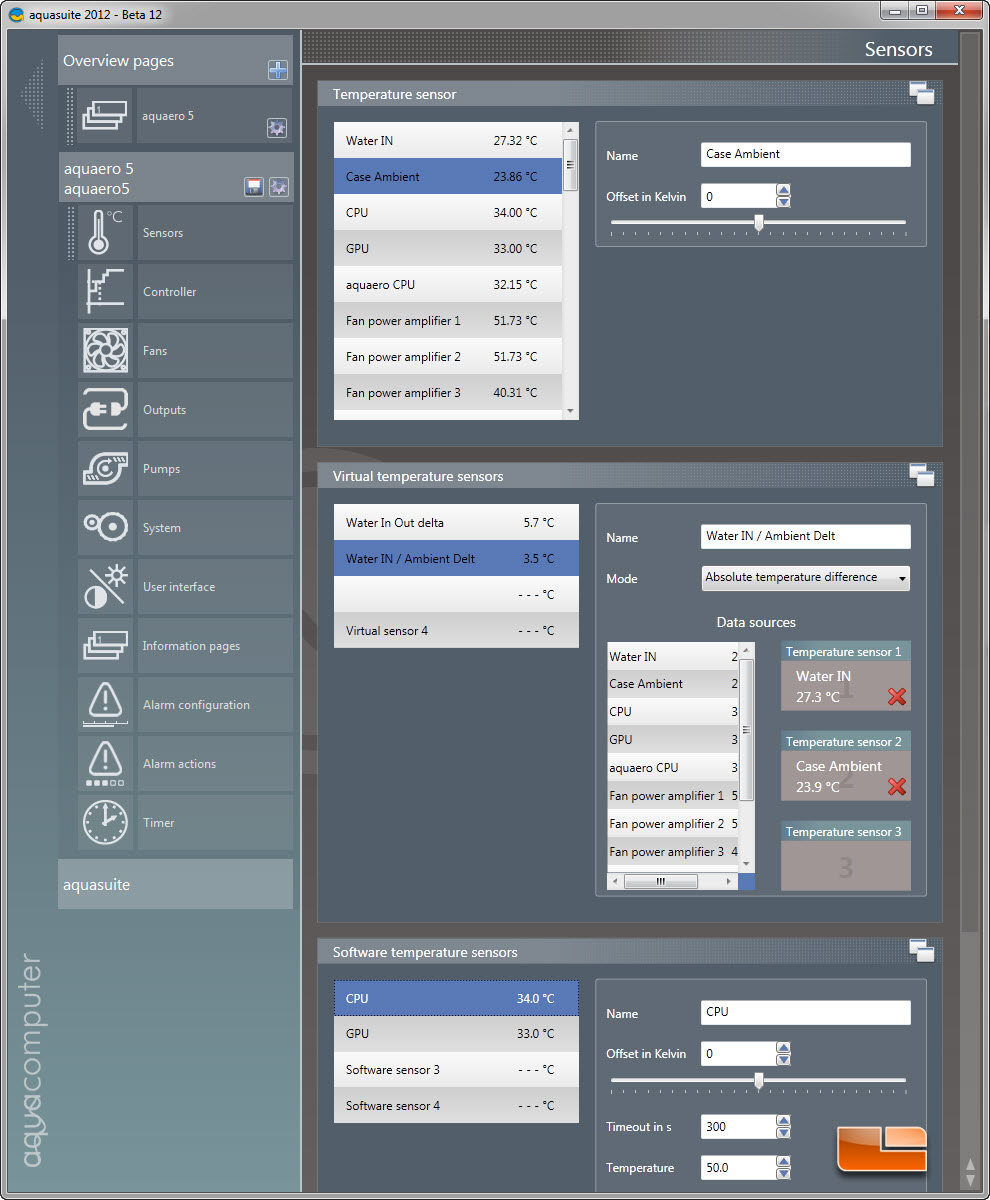 To start the configuration you start with sensors. To start you have up to eight thermal sensors on the Aquaero 5 XT and there are temperature readings for the Aquaero CPU and each of the four fan amplifiers. Next comes one of the most powerful features of the Aquaero 5, the virtual sensors. With these you can grab up to three other sensor values and have the system report the highest, lowest, average, difference, or absolute difference (no neg. numbers) between the the drag and drop values. We used the for items like ambient / water delta and water in / out (of the radiators) delta to see how well our system was cooling. Next you have the software sensors for items like CPU and GPU, then flow meters if you have any installed. And finally another very unique feature of Power Measurement that uses a combination of pump flow and two temperature values to calculate amount of thermal power such as water in/out + flow rate to give you watts dissipated. More interesting than valuable to most, but it is there none the less. 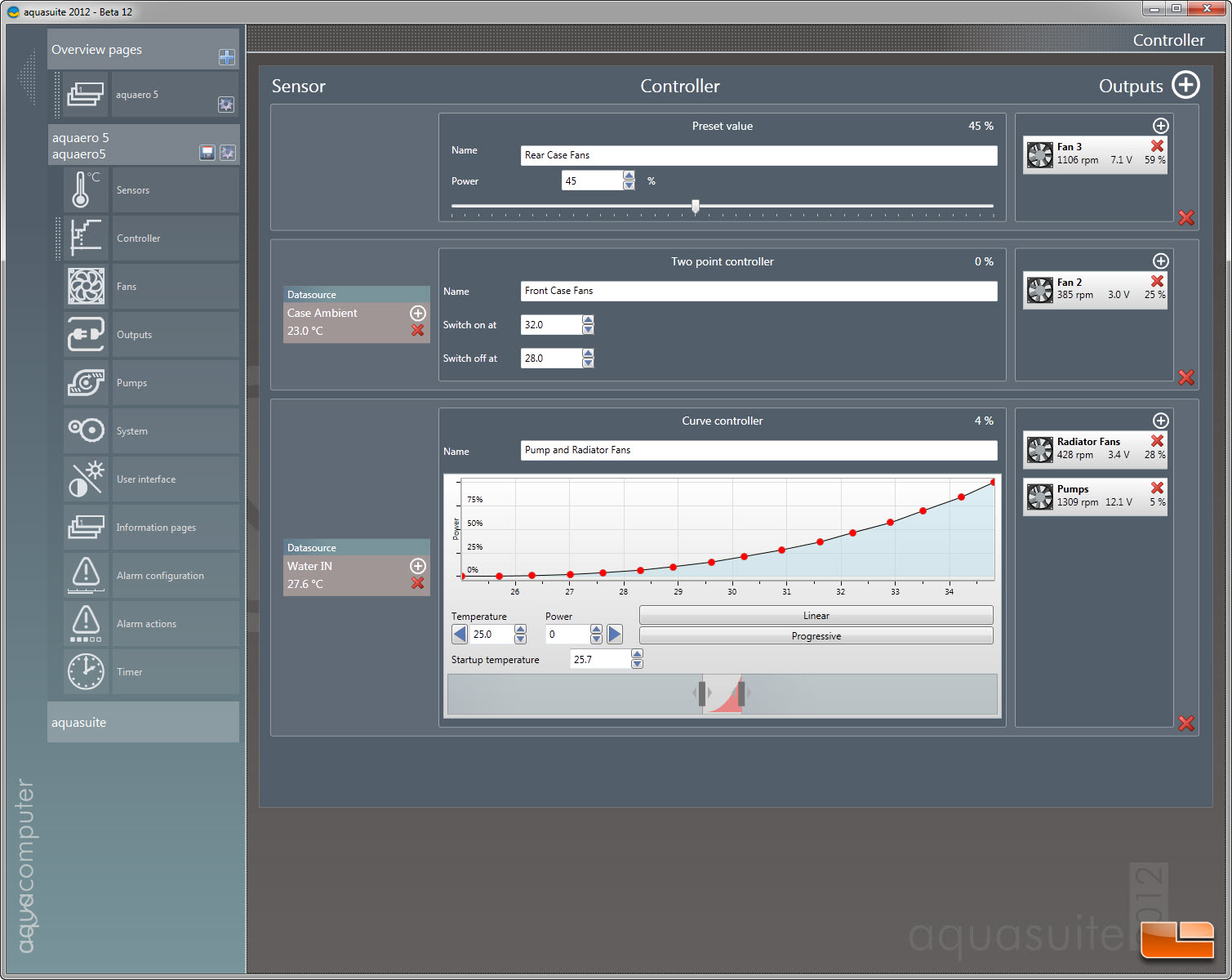 This is where things get really powerful with the Aqua Computer Aquaero 5 XT, the controllers. Bascially you can select any sensor value including the virtual or software ones and set up a controller. Controllers can be a static value, a set point, two point, or a curve controller. Static is just what it says, you pick a value from 1% – 100% and any fans, lights, or other items will run at that percentage. Set point has you put in a single optimal temperature value with hysteresis and several factors and just like your home thermostat the system will attempt to maintain that temperature for that sensor by turning on and varying whatever fans or other devices assigned to this control. Two point is very basic, just switch on at temperature A and switch off at Temperature B. Finally probably the most common is the curve which is editable in just about ever conceivable way. You can set a range with the sliders at the bottom and then decide if you want a linear or progressive curve. Every point on the curve can be manipulated including the start up temperature. As the sensor you watching (“Water IN” in our case) gets hotter the system gradually turns up the devices, and as they cool back down things slow down. We have our pumps and radiator fans on this curve so they keep the water cool while remaining almost totally inaudible. If you purchased the optional RGB LED, there is a control for that also which you use to set what colors are displayed based on a sensor reading. 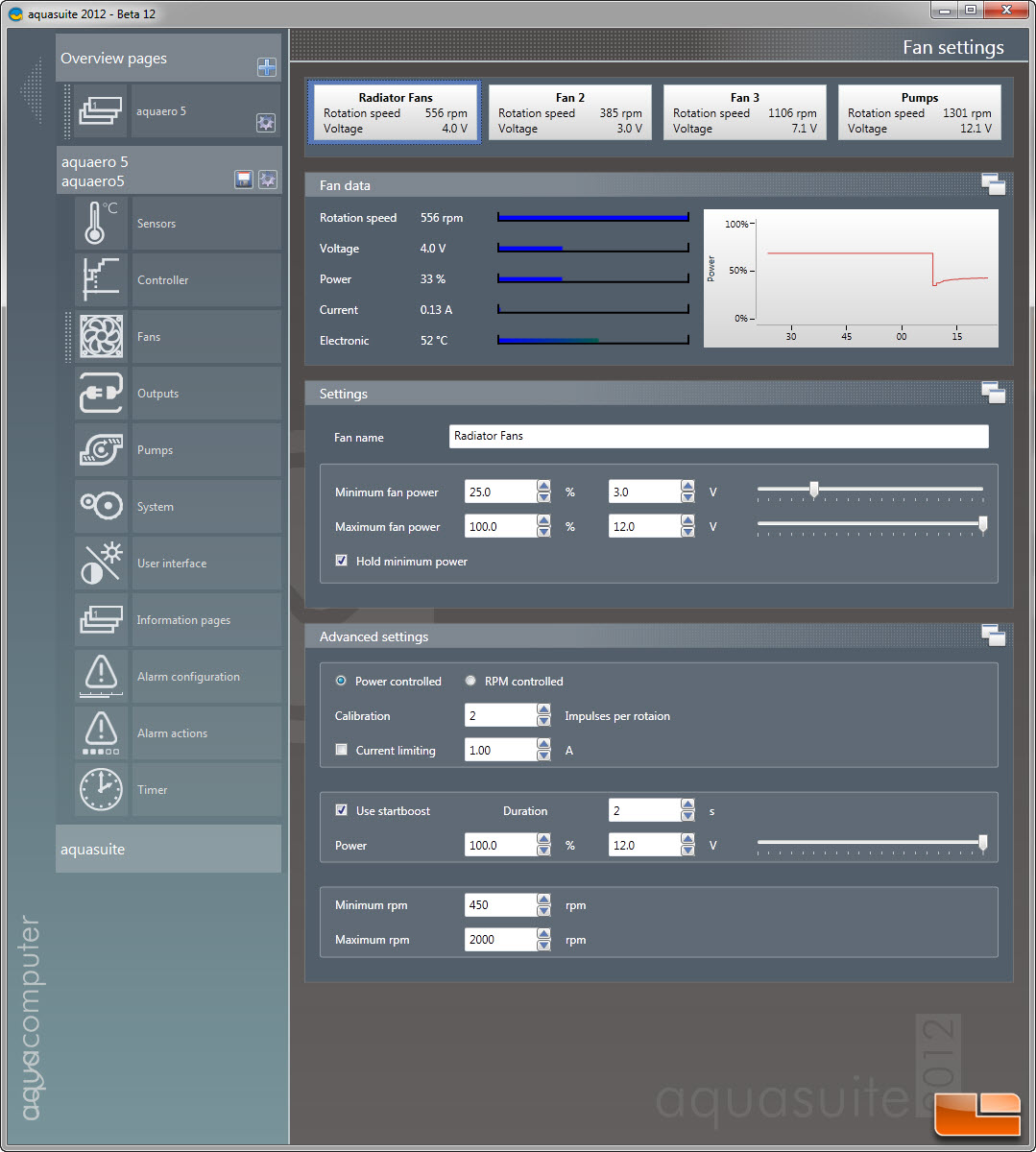 The next major section is the fan set up. For each of the four fan amps you are presented with this screen that like everything else lets you custom name the fan control and provides you with a wealth of information. You can see all the stats for a given header such as RPM, power, voltage, current, etc. Then you can set a minimum power so your fans will never fully turn off, and you can set if you want the fans controlled by power percentage or RPM speed, and on channel four PWM signal. There is even a setting for a startboost if you have devices that need a higher start up power than the minimum power they will run at. Finally you can set minimum and maximum RPM speeds. 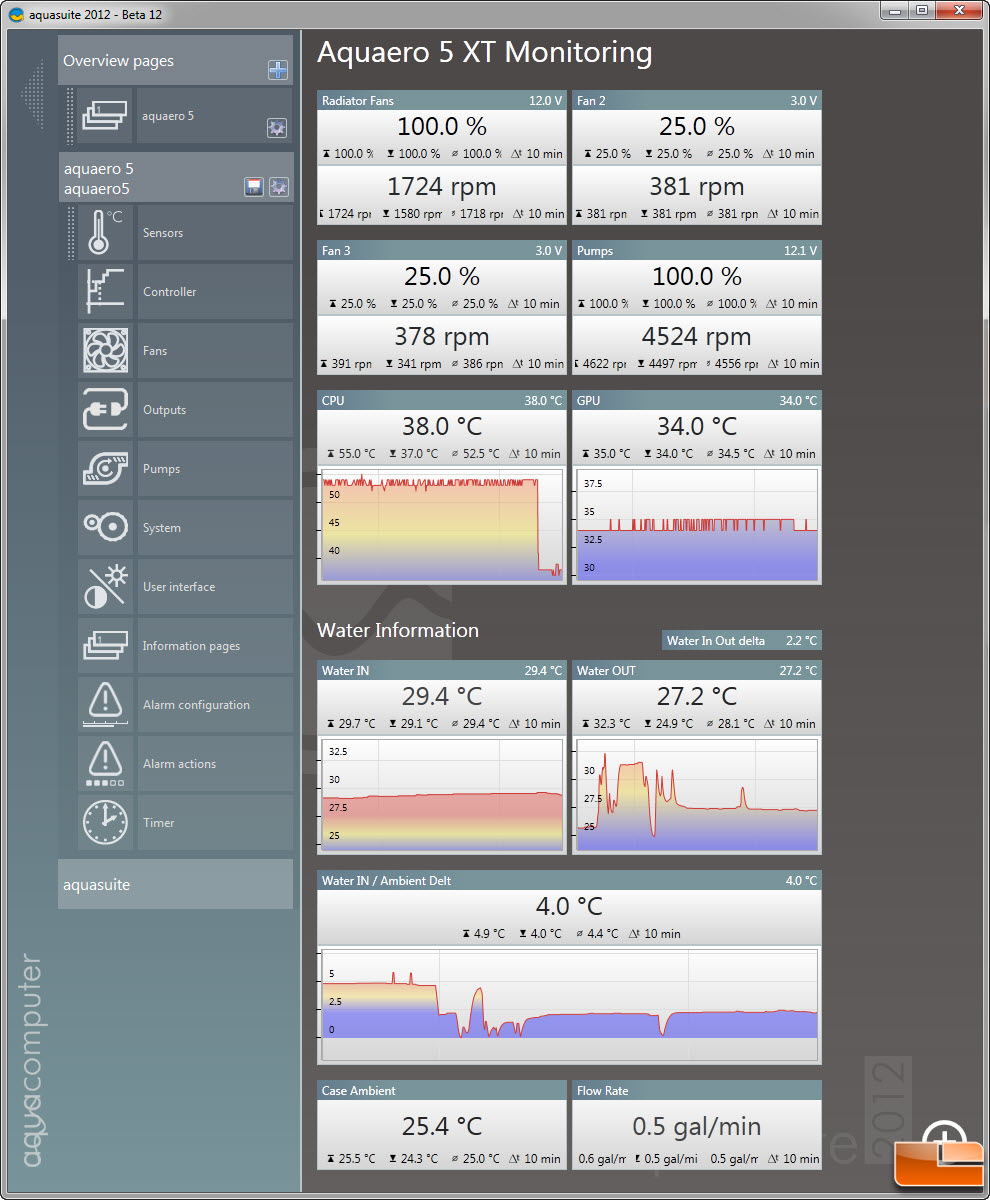 Once you have that basic setup you can click on the top Aquasuite 2012 overview page and start configuring. There is a default Aquaero 5 page you can load or you can create your own. The software supports almost unlimited summary pages so you can have info organized however you wish. This is our customized version of the default screen and once you understand the software it is very easy to represent the data any way you want. For every sensor you can display the current state, the stats (high, low, average), and graphs as we have above. You can even select the colors of the graphs based on a low, medium, high value that you also set. We went for the obvious blue = cold and red = hot motif with yellow as medium. 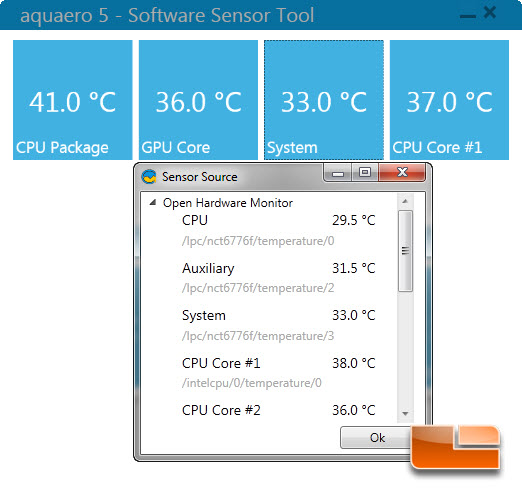 The only downside to the current beta software is that if you want system information such as the CPU or GPU temperature you have to run a second Aqua Computer software package which you can download here from Aqua Computers. This runs the little application above which will grab data from yet another application such as SpeedFan, AIDA64, or Open Hardware Monitor (special Aquaero version here). We are hopeful that when this software gets out of beta you won’t need to run two additional programs just to grab CPU and GPU data.
Questions or comments? View this thread in our forums!