Over the weekend we started seeing stories that AMD Radeon Vega 64 air cooled models could get 43.5 MH/s at just 130 Watts of power when mining Ethereum using Claymore’s miner. It seems a bunch of sites picked up the story of a Reddit user that was able to get his AMD Radeon RX Vega 64 air cooled card to reach these numbers with a core clock of 1000MHz, a power target of -24% and the 8GB of HMB2 memory overclocked to 1100MHz. Nothing too crazy right?

A few days after that post was made the original Reddit poster got his hand on an actual power meter to test system power consumption at the wall. With this new tool in his possession he came up with around 150 Watts per card after doing some math on the efficiency of his power supply. Before that math he was showing around 164 Watts per card. Not exactly the 130 Watts he claimed, but still not a bad number. The bad news was that a number of Reddit users were unable to reproduce his results. He said this in a couple posts that we combined into one quote to defend his numbers:

After looking at other’s try to reproduce my power levels, I’m thinking its because they’re not able to reproduce the bug in WattMan that drops the GPU core voltage to 825 to 835mv. I exploited a bug in WattMan in 17.8.2. Take a closer look at my voltage readings for HWiNFO. I don’t use the blockchain driver.

So, he’s not using the blockchain driver, exploiting an unknown bug in AMD’s WattMan utility that is part of Radeon Software Crimson Relive Edition 17.8.2. To top that off he’s using a rather new and unheard of power meter to get his numbers.

His numbers got us interested in seeing what was going on though, so we grabbed our well known Kill A Watt P3 P4400 series power meters that we’ve used for over 15 years and our Vega graphics cards to see what all the hubbub is about. We’ll also be trying out the AMD Radeon RX Vega 64 Liquid Cooled edition for the very first time for this article. We just got this card and want to see how far we can push it! 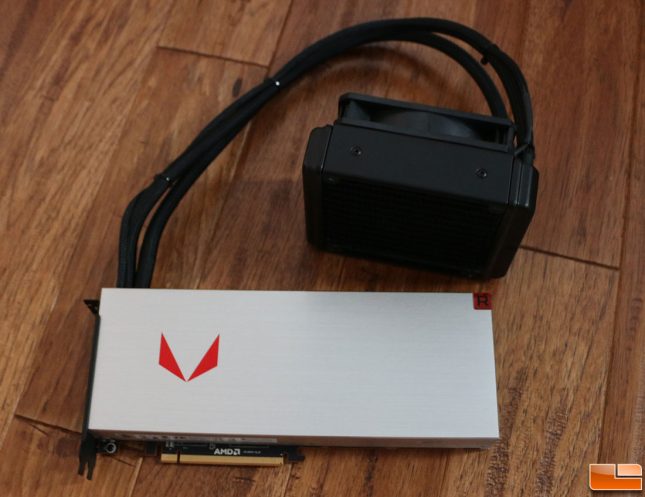 We used Claymore’s Dual Ethereum AMD+NVIDIA GPU Miner v10.0 (Windows) on our Intel X99 test platform that was running an Intel Core i7-5960X processor and 16GB of DDR4 memory. This is not the platform you’d want to mine 24/7 on due to the high power usage, but will do for our testing needs today. 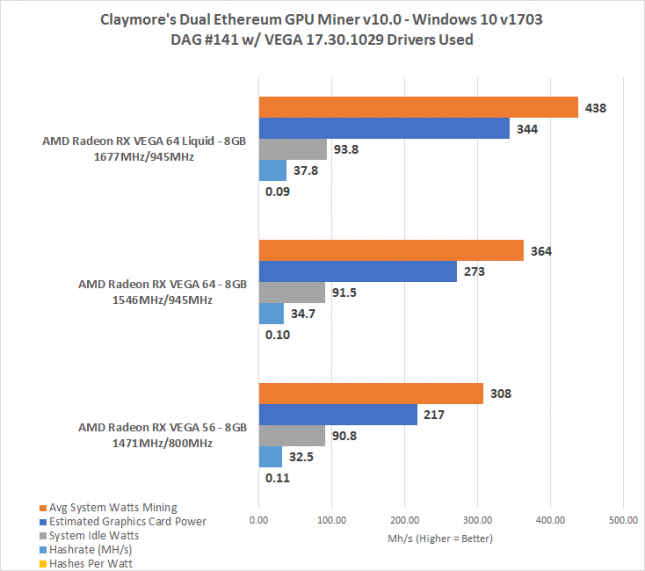 Straight out of the box with no tweaks whatsoever we were getting 32.5 MH/s on Vega 56, 34.7 MH/s on Vega 64 Air and 37.8 MH/s on Vega 64 Liquid. When you look at the Hashes per Watt the Vega 56 card is actually doing the best, but the Vega 64 liquid cooled card has the highest overall hashrate. 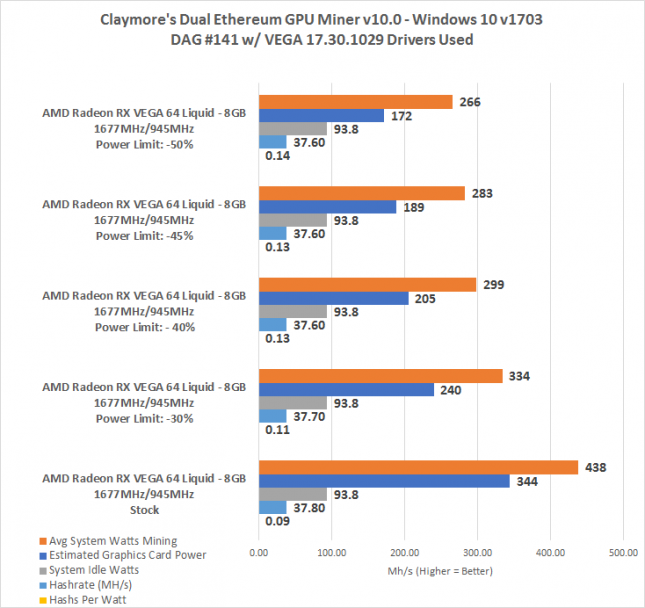 We took the Radeon RX Vega 64 Liquid model and lowered the power limit to see what would happen. Lowering it beyond 30% dropped Ethereum mining performance just slightly, but not by much. The power draw of the GPU decreased dramatically though and this is what we were after. At a -50% power limit we were stilling getting 37.6 MH/s of performance with the entire system pulling just 266 Watts. This is a 172W decrease in power consumption from the stock 0% power limit setting and the card itself was consuming roughly 172W instead of 344W. The cards Hashes per Watt went from 0.09 to 0.14, so this is a nice improvement in power efficiency without hurting ethereum mining performance too badly. Using just

Our load and idle power numbers are taken from the Kill A Watt power meter at the wall and we didn’t do any fancy math for the efficiency of our Corsair AX1200i Digital ATX Power Supply. If that irks you, you can use the efficiency chart from Corsair on this model with our wall numbers (122Vac according to the meter). 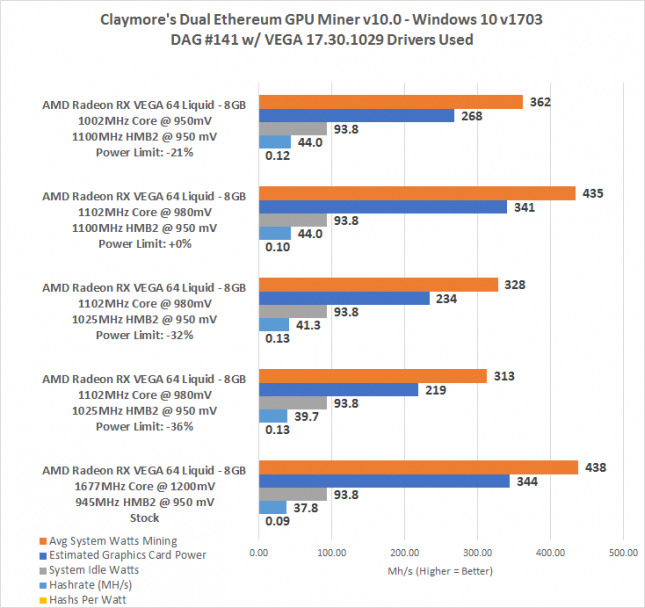 So, now that we know what a stock Vega 64 Liquid cooled card performs like we can start to overclock the memory and underclock the core. Dropping the core down to 1100MHz in Wattman at 980mV and overclocking the HMB2 memory up to 1025 MHz let us break the 41 MH/s barrier for the first time on this card. We found a -32% power limit was the sweet spot for this configuration as anything more would drop the performance to below 40 MH/s. To push the card even more we actually bumped up the HMB2 memory to 1100MHz with full stability and was able to break 44 MH/s with the memory clocked that high. Anything higher than 1110MHz and the system would lock up immediately and we couldn’t see a performance difference between 1100 MHz and 1105 MHz. 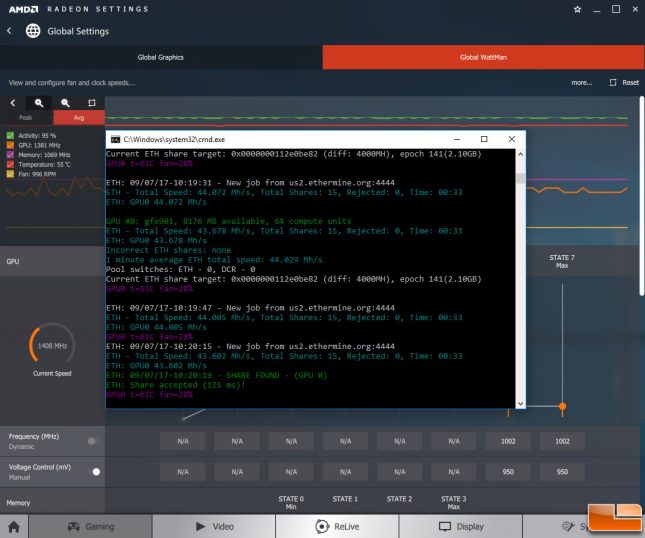 Despite setting GPU STATE 6 and STATE 7 Max to 1100MHz in Wattman we noticed that the GPU was running around 1400MHz. Dropping the power lower than 950mV had no impact on the GPU’s power consumption or stability while mining, so clearly these two power states are not being used. Using advanced tools to adjust the power states will most certainly allow for lower power usage, but WattTool and OverdriveNTool both failed to set the lower GPU STATES. 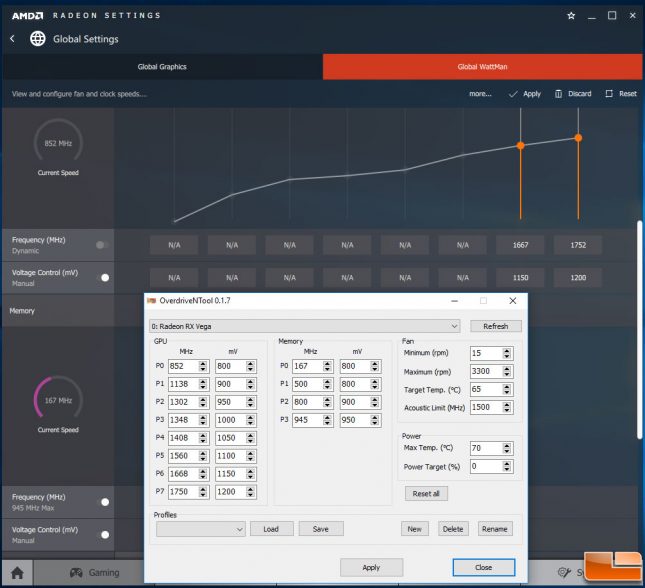 You might also be able to exploit the power bug in Wattman on 17.8.2 drivers like some claim to have done or find another utility that will lower the GPU clock and power down for this card to be more efficient. The nice thing about OverdriveNTool is that it shows the MHz and mV for each state that is hidden in WattMan by AMD. We’ll have to see if Radeon Software Crimson Relive Edition 17.9.1 drivers that come out later today will have that same ‘bug’ that some are seeing in 17.8.2.

We are happy with the 44 MH/s that we were able to get from the AMD Radeon RX Vega 64 Liquid cooled card and it looks like there are still ways to make it more efficient mining Ethereum!

This news is certainly going to get more miners interested in the Vega GPU series and that is bad for gamers.

Good luck finding one for close to the launch MSRP though…

Be sure to check out our articles on Ethereum mining: