Earlier this week we showed you that the NVIDIA GeForce GTX 1070 Founders Edition had really good hashrate performance of around 27 MH/s in stock form and then easily over 30 MH/s with the memory overclocked. Most GeForce GTX 1070 8GB graphics cards are over $400, so today we are going to be looking at the lower cost GeForce GTX 1060 graphics card. This card in-stock for purchase at most retailers and prices start around $249.99 and depending on the model you should have a hashrate of around 18-19 MH/s. Once you overclock the memory you should be able to get the hashrate on the GTX 1060 up to around 22-23 on most cards. With six of these cards in a mining rig you are looking at roughly 135 MH/s for your $1,500-$2,000 investment in buying six GeForce GTX 1060 video cards. If you are lucky you might be able to hit 24 MH/s if you get some decent overclockers! 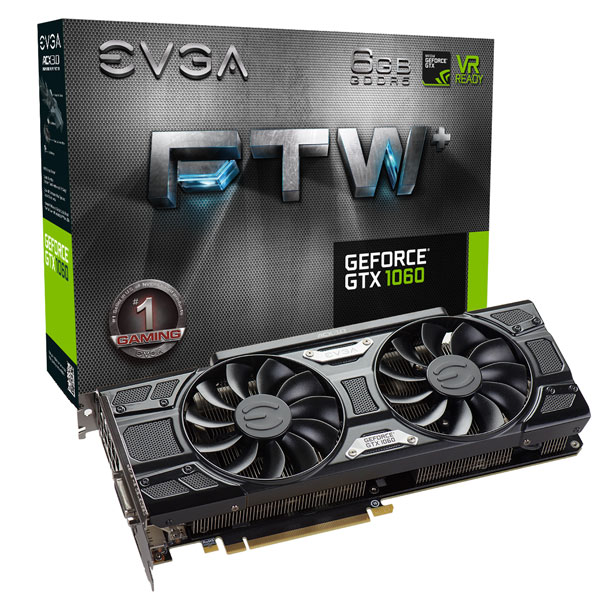 We did some testing on the EVGA GeForce GTX 1060 FTW+ 6GB video card on Claymore’s Dual Ethereum AMD+NVIDIA GPU Miner v9.5 and got some pretty interesting results that we wanted to share with you. This card is priced at $5.99 shipped, but it uses the same GPU cooler as the lower cost GeForce GTX 1060 6GB SSC gaming.

Note that for the Estimated GPU power that we subtracted the overall power consumption at the wall outlet of the system at idle from the overall system power number while mining.

We used the EVGA Precision X OC utility to overclock the memory on the EVGA GeForce GTX 1060 and managed to overclock the cards memory from an effective rate of 8,000 MHz all the way up to 10,000 MHz! Our hashrate mining Ethereum went from 18.88 MH/s to 23.61 MH/s! Most impressive was the fact that the GeForce GTX 1060 was only using 100 to 113 Watts of power our temperatures were 70C or lower and the fans were pretty quiet. Our card didn’t like running the 6GB of GDDR5 memory at 10,000 MHz for long periods of time and we started to get artifacts on the screen, so we lowered it down to 9,500 MHz as that was rock solid. 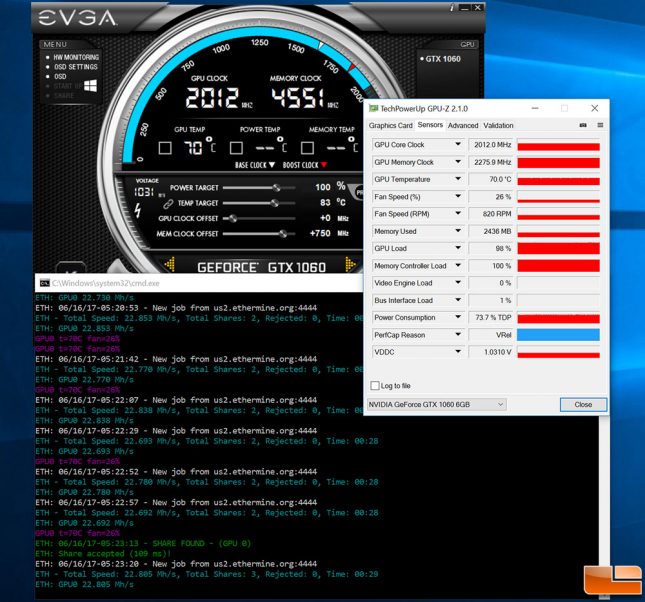 By lowering the power target we managed to go from ~110 Watts of power at 22.8 MH/s to just ~65 Watts of power at 22.1 MH/s. As you lower the power target the hashrate does take a slight performance hit, but loosing roughly 0.5 MH/s for cutting the power use by 45 Watts is pretty slick. We also managed to drop our temperature from 70C down to 58C and on this 0dB graphics card model that means the fans stop spinning! 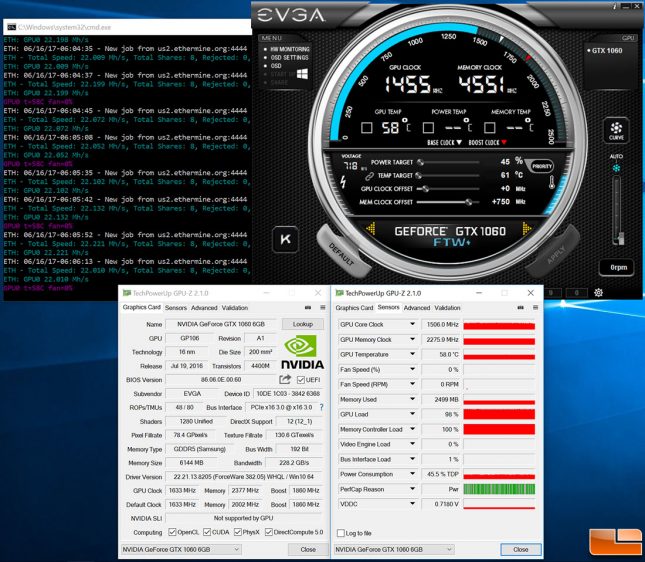 So, we are mining Ethereum getting 22 MH/s on a card using 65 Watts of power with no fan noise. That is pretty crazy! Fanless silent Ethrereum mining! If you go down to a power target of 40% the hashrate takes a major performance hit and it isn’t worth going below 45%.

Profit From Our One Overclocked GeForce GTX 1060 at 100% Power Target: 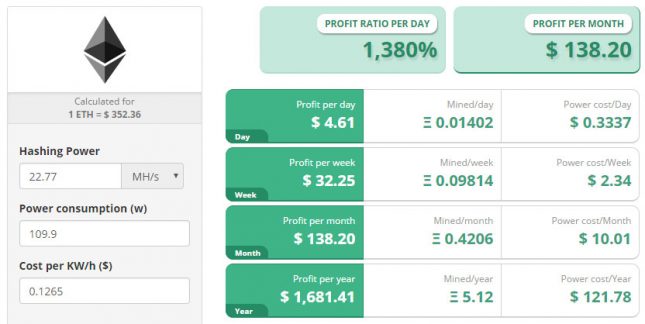 Profit From Our One Overclocked GeForce GTX 1060 at 45% Power Target:

If you buy six of these cards you are looking at a profit of about $10,080 per year or if you get seven cards that number rises to $11,760 per year. How much would it cost to build a Ethereum mining PC that can hold seven of these cards for around 155-160 MH/s of performance? Here is a quick example of the hardware you’d need:

You are looking at around $2,450 to setup a system like this that should be capable of mining just shy of 3 Ether per month at the current difficulty levels. That means you’d be making about $966 per month if all goes well. That means you’d get your investment back in the hardware in right about 2.5 months. Not bad for 155-160 MH/s and

Hopefully you can find enough GeForce GTX 1060 video cards to purchase right now to build the mining rig that you want to make! You can find GeForce GTX 1060 3GB models and 6GB models, but keep in mind that the DAG file will eventually grow past 3GB based on the projections of many.

6/18/2017 Update – We highly advise using this profitability calculator as it estimates the ever increasing difficulty. Thanks to those that pointed that out!