AMD sent out full test systems to reviewers and when we got ours we took out the stuff we didn’t want to use and installed the hardware that we wanted with our own clean installations of Windows XP Professional.  The GeForce 7900GTX’s that came with the system were removed and the faster GeForce 8800GTX’s were used in their place.  We kept the two 2GB kits of Corsair PC2-8500 DOMINATOR memory and the 1KW PC Power and Cooling power supply as you can’t get much better than that!  We also upgraded the BIOS from revision 14 to revision 20 the day prior ro benchmarking, so our test system was updated the best that could be when we fired it up. 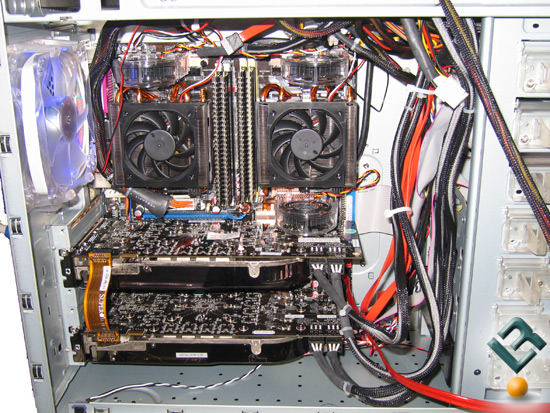 All testing was done on a fresh install of Windows XP Professional build 2600 with Service Pack 2 and DirectX 9.0c. All benchmarks were completed on the desktop with no other software programs running. All of the modules were run in dual channel mode! The memory on the Intel and AMD test platforms with DDR2 memory was run with Corsair PC2-6400C3 memory running 4GB at 3-4-3-9 2T timings at 800MHz. except for the Intel quad-core system as it was run at 3-3-3-9 thanks to improved memory performance on Bad Axe 2. The memory on the AMD DDR1 motherboard was running 2GB at 400MHz with 2-3-2-6 timings.  The memory timings on the Quad FX system were set to 4-4-4-12.

Here is the AMD Scoket AM2 Test platform:

Here is the Intel Test Platform:

Let’s move on and take a look at the testing!