Now that AMD has moved the FX series of processors over to a new package it means that you can’t mix and match them with other processors that are currently on the market.  It’s physically impossible to put an FX-74 in an AM2 platform because it just wont fit!

Flipping the processors over you can really see the differences.  The FX-62 on the left has 940 pins and the FX-74 on the right has no pins, but has 1,207 locations connection points on the bottom of the processor – hence the 1207 LGA name. 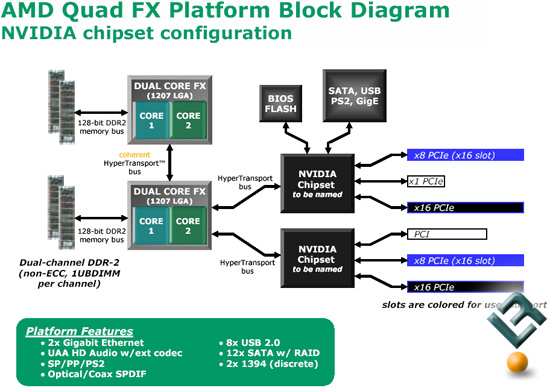 AMD has put two of these FX-70 series processors on a motherboard with a pair of NVIDIA 680a chipsets and has managed to create a motherboard that puts nearly all others to shame.  The two dual-core FX-70 series processors are connected to each other by a single coherent HyperTransport bus and each processor has it’s own independant set of memory banks. The DDR2 memory controller has been modified to run dual-channel non-ECC memory modules, so while two dual-channel memory kits are required ECC memory will not be.

The processors connect to the each NVIDIA nForce 680a with a HyperTransport link, so a total of two HyperTransport links are present from the first processor to the chipsets. Since the platform uses two chipsets four x16 PCIe slots are present, which allows for four graphics cards to be run.  In the future Quad-SLI and other powerful graphics solutions will be able to be run on this platform. This platform is also ready for Greyhound/Barcolana, which means this QuadFX platform is ready to scale up to an 8-core platform in 2007 when the next generation processors arrive.  Since the platform is ready for the 45nm quad-core processors it’s an added bonus for those that purchase one of these systems.

It should be pointed out that since QuadFX has two independent processors that the system has two memory controllers and therefore has a non-unified memory architecture (NUMA).  Since Windows XP doesn’t support NUMA the memory performance scores in our benchmarking section will be lower than what will be seen on Windows Vista as NUMA is supported. AMD recommends enabling Node Interleave for Windows XP and disabling this feature for Windows Vista on its QuadFX platform.

To sum up the platform features support for 12x SATA drives, 8x USB 2.0 devices, two firewire ports, HD audio, 56 PCIe lanes and two gigabit ethernet connections.  The system is a monster and for those that can afford the system and 12 SATA drives it can be configured with three seperate RAID 5 arrays, which would lead to some serious storage and performance combinations for those who know what they are doing.