Editorial Note: Both the Intel quad-core and AMD QuadFX platforms consume more than 5 Amps of power during gaming when used with GeForce 8800GTX graphics cards in SLI. The AMD QuadFX test system shown above with FX-74 processors was actually hitting more than 6 Amps on 3DMark06 when we ran it at default test settings. With both the Intel QX6700 test system and AMD QuadFX FX-74 test systems running on the test bench at the same time I managed to trip my 15 Amp service to the room. Granted most homes in America use 14-2 Romex wiring with a 15 Amp breaker I figured that this might cause an issue where a many enthusiasts use more than one device in a room. If possible I highly suggest that when remodeling or building new to use 12-2 wire and a 20 Amp circuit breaker to power your multimedia room. 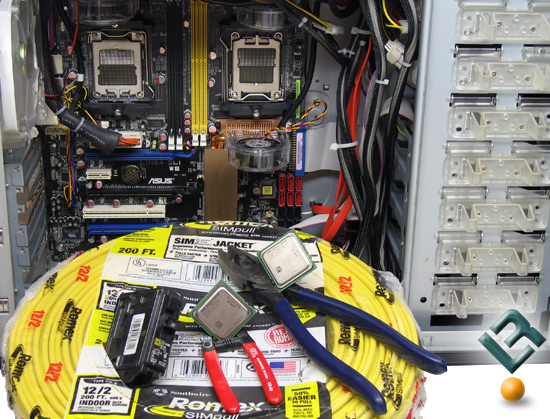 Since power consumption is a big deal these days we ran some simple power consumption tests on our test beds.  Both systems ran with the same memory, power supplies, case fan, video card and hard drive model.  To measure idle usage we ran the system at idle for one hour on the desktop with no screen saver and took the measurement. For our ‘load’ readings we ran the system under partial load by running a custom video game demo on all of the processors. This simulates real world use as the majority of our readers play video games.

When it came to idle power consumption the AMD Quad FX system consumed more power than the QX6700 system that was identical down to the same optical drive and fans. The Quad FX system used 124W more at Idle than our Intel QX6700 processor running on it’s test platform.

Under load the Intel X6700 uses 140W less power, but still used a ton considering most people don’t have a power supply that large in their current system.  The only power supply that has passed AMD’s testing for Quad-FX is the 1000W PC Power & Cooling PSU, but as the chart above shows a 750W power supply should be plenty for a single graphics card, but for SLI we would suggest using at least an 850W power supply to be on the safe side.

**TIP** If you are interested in saving even more money every month try switching to an Active PFC power supply!