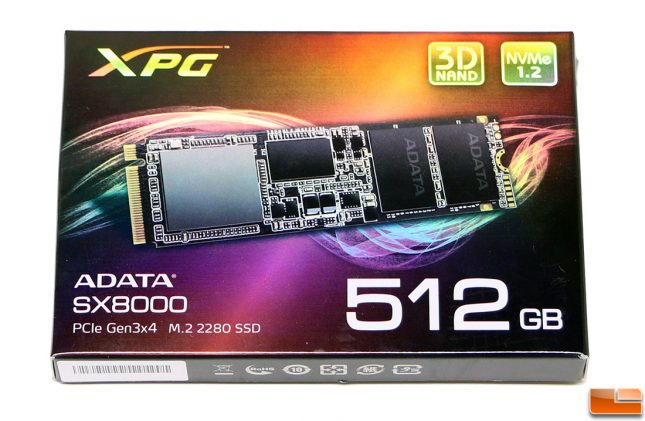 The XGP SX8000 SSD series is ADATA’s flagship SSD model that was designed for gamers and overclockers looking for a high-end drive that will load quickly load games and launch applications. This drive does carry some impressive specifications from the 3D MLC NAND Flash, SLC Caching, large DRAM cache buffer and NVMe 1.2 certification. Those features and the 2,500 MB/s sequential read and 1,100 MB/s sequential write place this drive solidly in the middle of the high-end M.2 PCIe NVMe market. Our performance numbers showed that as well as it never was at the top of our performance charts, but was also never at the bottom. This drive was constantly in the middle or lower half of the 12 drives it was compared against. Not bad considering it was compared to big name brands like Samsung, Western Digital, Intel and others. The bad news is being in the middle of the pack doesn’t get you much attention.

The ADATA XPG SX8000 512GB retail drive that we looked at came in an empty box, so there was no accessory bundle of any sort is included. The ADATA SSD Toolbox does not fully support the drive on Windows 10, but ADATA hopes to change that with a new build that is released in April 2017.

When it comes to pricing, the ADATA XPG SX8000 M.2 PCIe NVMe SSD is relatively affordable for being an NVMe storage drives on the market today. The 512GB model that we reviewed today is priced at $199.99 shipped or just $0.39 per GB. That price is comparable to many of the other M.2 PCIe NVMe drives on the market today and the 5-year warranty is also comparable. If you are looking for an M.2 PCIe NVMe drive be sure to keep the XPG SX8000 on the list of drives to look at.

Legit Bottom Line: The ADATA XPG SX8000 series is fast and the price is competitive, but the middle of the pack performance keeps it from standing out from the pack.