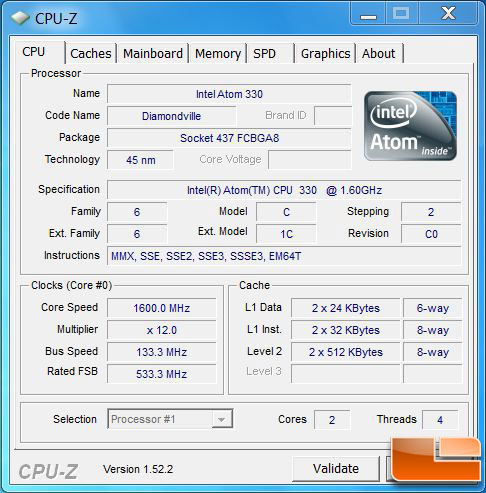 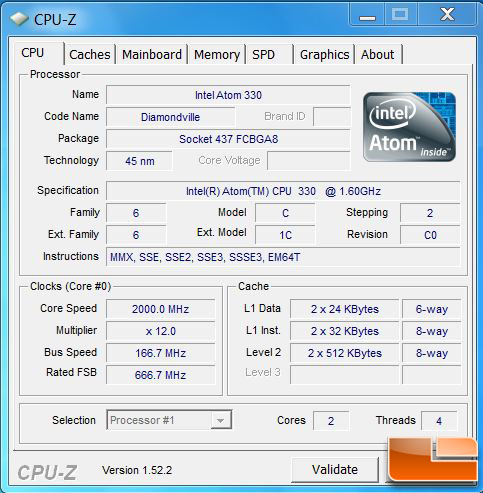 In order to provide a reasonable comparison for this low-power board, I decided to compare it to similar low-power boards running on similar platforms in various netbooks. In many cases, the netbooks use the Intel Atom platform, such as the MSI Wind U100 running an N270 @ 1.6 GHz. However, keep in mind that the comparison is hardly fair, as the Zotac IONITX-A-U has unleashed the hounds without any need to worry about battery life. As such, it’s painfully obvious what advantages the dual-core Intel Atom N330 provides. 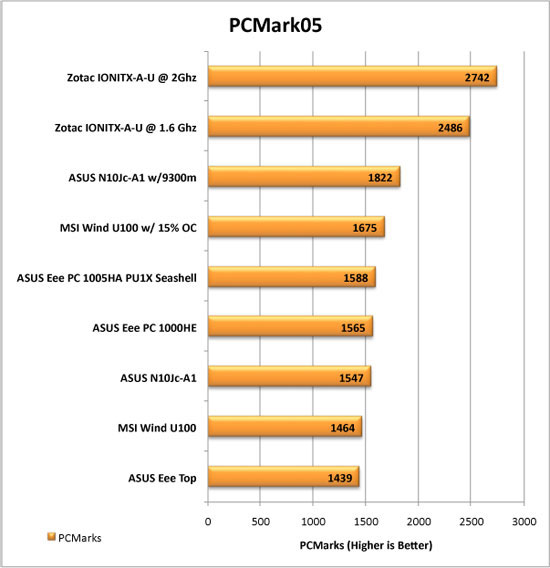 The above test was done using PCMark ’05, a benchmark focusing on testing the system in a variety of ways using portions of real applications, as opposed to arbitrary algorithms or special code. As such, these results are a good indication of the real-life performance. Based on the charts above, it’s clear to see that the IONITX-A-U stands well above the netbooks.  Of particular interest is the roughly 10% boost in performance as a result of overclocking. 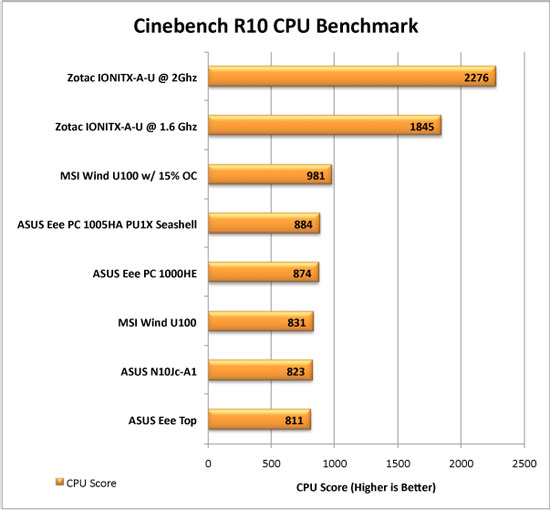 The above tests were run using Cinebench and taking the composite CPU score of the benchmark.  Cinebench is a free benchmark tool based on the CINEMA 4D software, and it uses both graphics processing and cpu power to determine its score.  As can be seen, the Zotac IONITX-A-U blew the netbooks out of the water in this test due to its advanced NVIDIA graphics and dual core N330 processor.  This is another good sign, considering the Zotac motherboard is supposed to be able to playback high definition content and will need that extra power for such computations. 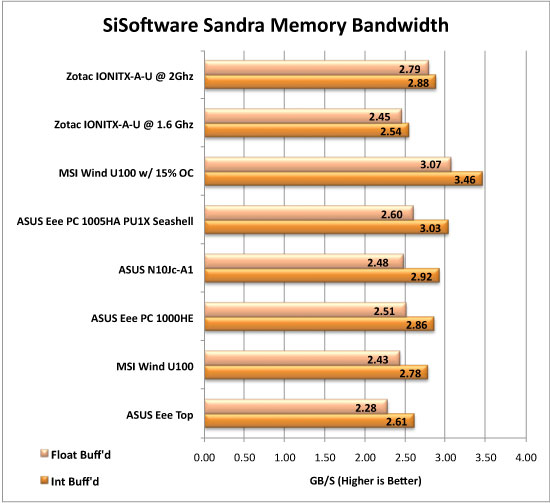 The only test with unimpressive results, this test by SiSoft Sandra’s benchmarking tool is aimed at testing the memory bandwidth by performing numerical transfers to and from RAM. As it can be seen, the netbooks actually compare very well to the Zotac motherboard, while the MSI Wind U100 actually beats it handily. This is likely because this test above all others is least likely to benefit from the improved graphics and cpu. Instead, the Zotac might actually be at a disadvantage due to only having a single stick of RAM while other systems likely had two sticks and could thus take advantage of dual channel memory boosts. 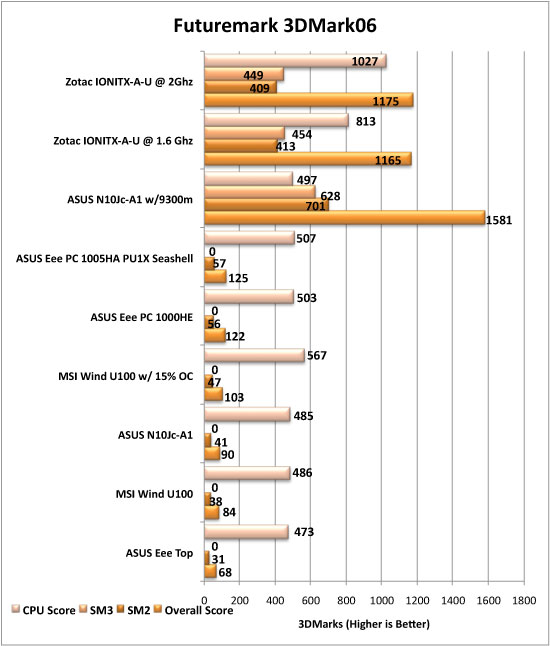 Futuremark’s 3DMark ’06 is a commonly used 3D-graphics benchmarking tool.  In the case of the IONITX-A-U, we see that it easily outperforms most of the netbooks, largely because those netbooks have battery lives to worry about.  As such, those netbooks do not have discrete graphics to help them manage 3D content.  However, the IONITX-A-U has the GeForce 9400m to give it an obviously helpful boost.  Surprisingly, we see that the IONITX-A-U failed to defeat the ASUS N10Jc-A1 with the GeForce 9300M.  This is likely for a number of reasons, including the facts that the 9300M has a faster clock and dedicated RAM, while the 9400M uses shared memory.  As such, this means the IONITX-A-U’s slower memory benchmarks will have a hand in holding it back somewhat in graphics tests. 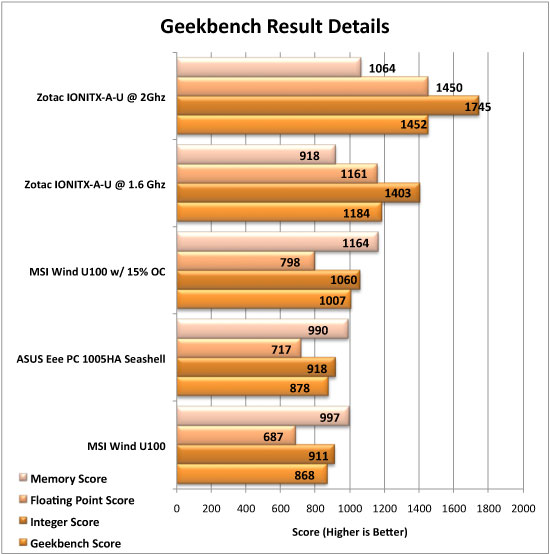 Geekbench runs the system through a battery of low-level, basic tests emphasizing mathematical calculations. While not necessarily indicative of common application performance, it shows a system’s pure computational strength.  It’s also an important test when considering a system’s capabilities with high definition content, as every video and audio codec is computationally intensive.  It’s quite clear yet again who the winner is, with the overclocked Zotac IONITX-A-U almost doubling the MSI Wind U100 in half the tests and even more-so in the floating point score.  That’s great for a motherboard that’s supposed to handle Blu-Ray playback. 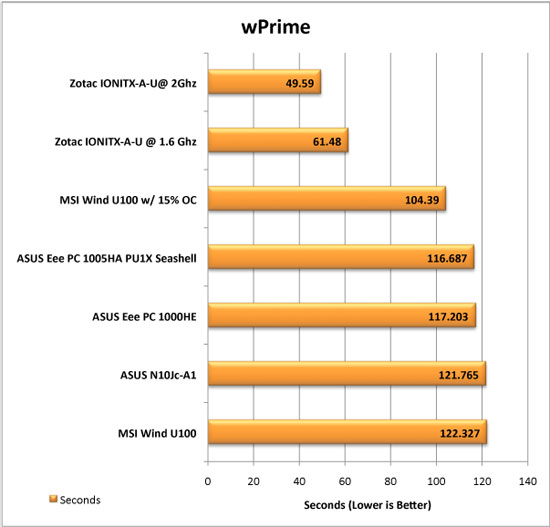 The last benchmark comparing the Zotac IONITX-A-U to other netbooks is wPrime, a benchmark that purely powers through a massive series of computations as fast as possible. In this case, lower is better, as wPrime attempts to calculate the prime numbers between 0 and a certain number. Once again, the IONITX-A-U dominates the test, once and for all and again showing the benefits of the Intel Atom N330 CPU.