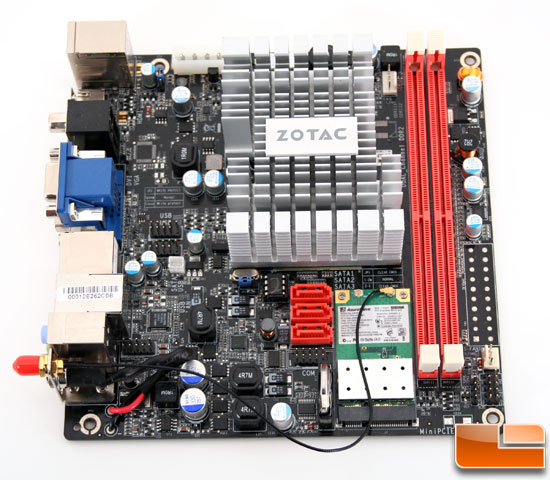 The Zotac IONITX-A-U is a small motherboard, being of the Mini-ITX form factor family, measuring a nice 6.7″ by 6.7″. This typically doesn’t provide much room to work with, but Zotac nonetheless packed in a surprising number of features. The large heat sink stamped “ZOTAC” in the picture covers both the graphics chip and CPU. Fanless, the motherboard again reiterates that it’s the quiet child of modern motherboards. The NVIDIA ION-based GeForce 9400 takes it the next step further to say it’s the quiet kid that loves to play with home theater equipment. Nice! Of course, though the motherboard is fanless, I’m sure the astute readers could guess that Zotac didn’t provide a case fan for the fun of it; users will still need to have a well-positioned case fan to keep the air moving. That is, a heatsink isn’t worth much without moving air.

Another topic worth mentioning is the lack of any PCI slot for expansion. While the Mini-ITX form factor doesn’t provide much room for expansion, and in fact expansion may very well be discouraged as it could be too taxing for the low-power system, the majority of Mini-ITX motherboards still include either a full PCI slot or newer PCI express slot.  Without one of these slots, the motherboard limits users from customizing the hardware configuration.  There is no way to add a high-end sound card, for instance.  For the majority of users, this shouldn’t be a problem, as Zotac has taken extreme effort to include a wide-array of features showing high quality.  For instance, to satisfy the audio needs of practically everyone, Zotac included on-board HD audio pins, audio over HDMI, digital optical audio output, coaxial audio output, and standard headphone audio jacks.  Whew!  Also, did I mention there are 6 on-board USB ports? 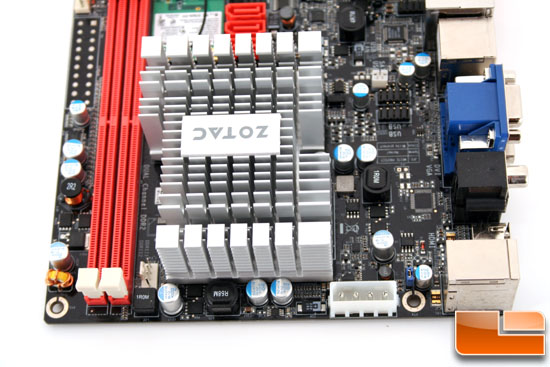 Situated alongside the heatsink are the two RAM slots, each taking at most 2GB of DDR2 667/800 RAM. On the top of the motherboard is one of the two fan power jacks and the 4-pin molex power jack providing power for the internal SATA hard drives. It’s important to note the position of this along with the 10″ length of the SATA power cable. If you’re trying to use a case you already have, as I did, you might want to do a little measuring. The power cable wouldn’t reach my hard drive, sad as the case may be. A pun? A cliche? You decide. In any case, there are SATA power extensions for sale elsewhere if necessary, but it’ll be a lot more fun if you have it on hand when you need it. 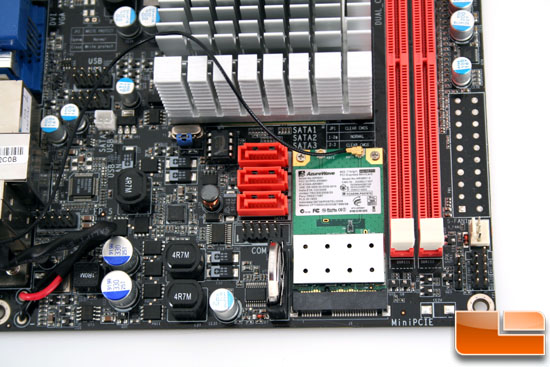 As previously mentioned, the IONITX-A-U has a PCI x1 mini-PCIe slot situated on the lower right portion of the board. This slot comes filled with an 802.11n Wifi module manufactured by Azurewave. This chip runs a wire to the rear of the motherboard where it can interface with the external Wifi antennae provided in the bundle. Also near the Wifi chip are the three SATA ports, the CMOS reset switch, CMOS battery, the second fan power jack, and the power/reset switch pins. 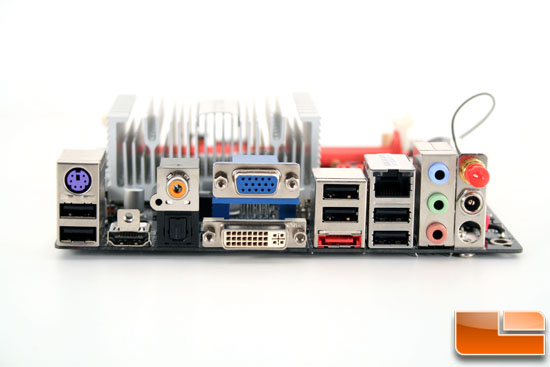 Here we have a lovely shot of the rear ports on the motherboard. The red rubber nub pictured on the far right covers the antennae jack where the external Wifi antennae screws on and is supposed to keep out the dust in the event you don’t need wireless connectivity.  Below the rubber nub is the power jack where the power supply plugs in.  You can also see the motherboard’s obsessive dedication to all things media, from the HDMI, VGA, and DVI trifecta video output to the optical, coaxial, and headphone jack audio output.  Throw in an eSata port and six USB ports, and the motherboard can be expanded to access plenty of external storage and devices.  Top it off with the Gigabit ethernet port and a strong Wifi signal via the provided antennae, and this small tiger pushes interconnectivity to some plane of existence encompassing multiple dimensions at the speed of light.  And I’m not just saying that!