The WD_BLACK P50 4TB Game Drive is the fastest portable SSD that we have ever tested. It won every single benchmark performance test that we ran! That is pretty impressive as it out performed over 20 well known drives with relative ease. This drive is rated at 2 GB/s read and write and we managed to get over 2 GB/s read and write on a USB 3.2 2×2 (20Gbps) port on our test platform.

But, the real story here isn’t all about speed. Western Digital has doubled the capacity of all of their portable SSDs from 2TB to 4TB without sacrificing performance. That is the big take home message! The WD_BLACK P50 delivers all the capacity you crave with industry leading performance!

Introducing 4TB portable SSDs will solve some problems for people out in the market that needed more than 2TB of storage space. It will be a savior for those that really needed a larger capacity as they can possibly use just one drive now instead of two or more. All WD_BLACK P50 Game Drives are backed by a 5-year warranty, but lets hope that is never needed. 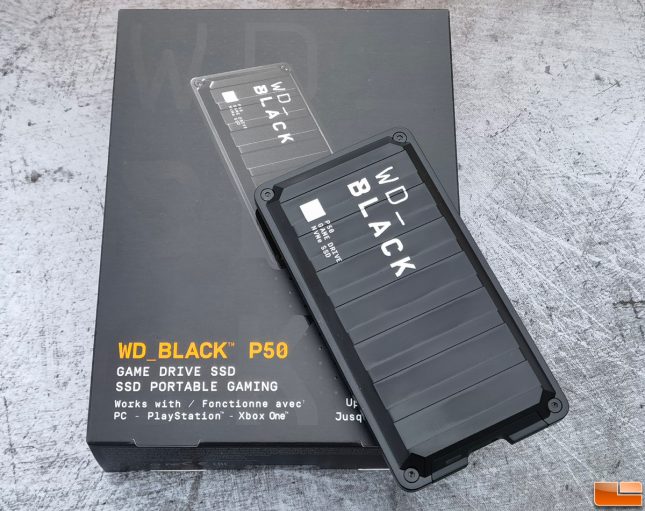 When will we see 8TB portable SSDs? We asked Western Digital that question just last week and they declined to comment on the record about when that will happen. They did point out that they showed off 8TB M.2 NVMe drives at CES 2020 last year and that the technology is ready for when the market is ready for such a product. So, for the foreseeable future it looks like 4TB will be the largest capacity that you’ll be able to purchase.

4TB WD_Black P50 Game Drive SSDs are expected to be available later this month at select retailers and the Western Digital Store at an estimated U.S. MSRP of $749.99.

The WD_BLACK P50 Game Drive easily gets our Editors’ Choice award for those that have a need for a big and fast portable storage drive!