WD Blue SN550 Wants To Be Your Value NVMe Drive

The SN500 was introduced by Western Digital earlier this year and was the corporations first entry-level NVMe SSD for the consumer market. Legit Reviews did a review on the WD Blue SN500 500GB drive back in April 2019 and found it offer solid performance for an entry-level NVMe SSD that was based on a DRAM-less design. The in-house Sandisk controller on the SN500 series utilized the PCI Express 3.0 x2 interface and was capable of reaching sequential speeds of up to 1,700MB/s read and 1,450MB/s write.

For the new WD Blue SN550 NVMe SSD series the engineers paired 96-layer 3D TLC NAND Flash with a new in-house Sandisk controller that utilizes the PCI Express 3.0 x4 interface. With twice the numbers of PCIe lanes, the WD Blue SN550 series is capable of reaching sequential speeds of up to 2,400MB/s read and 1,750 MB/s write! For random 4K performance you are looking at up to 410,000 IOPS Read and 405,000 IOPS Write. 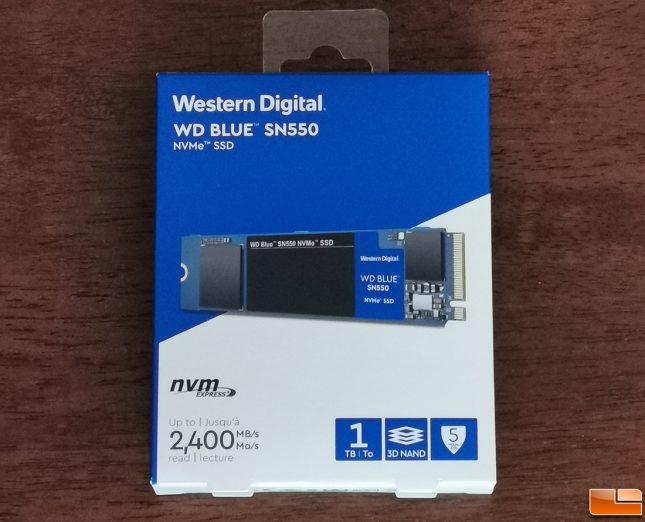 The WD Blue SN550 NVMe SSD series is available in three capacities ranging from 250GB all the way up to a 1TB capacity drive for those looking to have plenty of storage space. You have the 250GB (model number: WDS250G2B0C) for $54.99 shipped and a 500GB (model number: WDS500G2B0C) for $64.99 shipped and finally the 1TB (model number: WDS100T2B0C) at $99.99 shipped. That puts the price per GB at $0.22 for the 250GB model, $0.13 for the 500GB model and $0.10 for the largest 1TB drive. These are the suggested price points, so in the weeks and months ahead we expect this drive series to be available for less from your favorite retailer. DRAM-less drives cost less to make and rely on the Host Memory Buffer (HMB) that is available on later versions of Windows 10 for caching purposes. 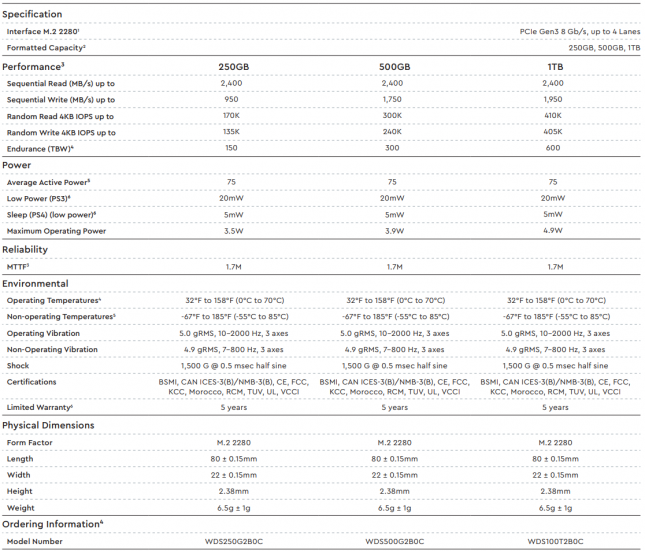 WD backs their Blue SN550 NVMe SSD series by a a 5-year warranty which is nice for an entry-level SSD drive. The endurance ratings are also solid with a 150 TBW rating on the 250GB drive, 300 TBW on the 500GB and 600 TBW for the largest 1TB model.

WD is using the M.2 2280 ‘gum stick’ form factor for the SN550 series. WD did move the NAND Flash package to the far end of the drive rather than placing it right next to the controller as they did on the SN500 series. WD likely did this to improve thermals as the controller and TLC NAND Flash are now separated to better disperse the heat.

Did you notice that there is a PSID number on the label of the SN550? PSID stands for Physical Security ID and is only found on SSDs with encryption. No where on the box, product page or press release does it mention that the SN550 supports encryption, so we asked WD what this was about. Western Digital told Legit Reviews that the SN550 is a non-SED device that does not support TCG Opal or the HW protocol e-Drive for BitLocker. It does however support ATA Password and a subset of Opal, called Pyrite that does not have any cryptographic encryption capabilities and therefore does not encrypt user data. Pyrite can be enabled via BIOS (if supported) to password-protect the user data. That means this password must now be provided to access the data on the device (albeit it is not encrypted, just password protected). Therefore, now, when system boots, it will check for supplied password and if correct, granted access to the device. If the user forgets said set Pyrite 2.0 password, the PSID on the label can be used to forgot password, which then triggers a secure erase of the device and resets the password.

Microsoft Windows 10 does allow you to enable BitLocker via software encryption and we gave that a shot. We enabled Intel Platform Trust Technology (PTT) on our MSI Z390 motherboard with the SN550 drive and BitLocker encrypting worked just fine.

All three models in the WD Blue SN550 series are single-sided, so there are no components on the back of the drive and should fit in any desktop or laptop that supports 80mm long M.2 drives.

Let’s take a quick look at the SSD test system and then move along and see how this DRAM-less drive performs against other consumer 1TB class drives.