To test this flash drive we used the following system:

We used both the standard File System Benchmark in SiSoft Sandra as well as our own timed and monitored file transfer in both 256MB and 512MB flavors. 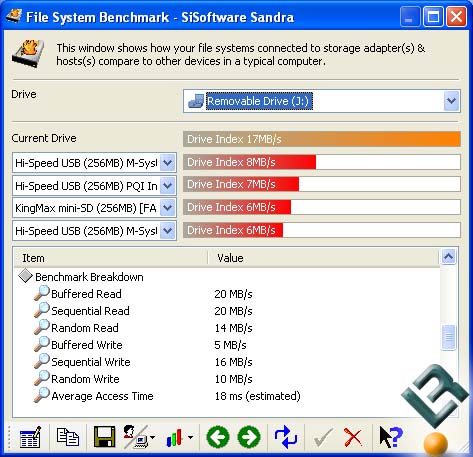 The picture shows that the drive held up very well.  In 3 consecutive runs, the drive put up identical numbers give or take one unit.  This score surprised us quite a bit, as we were expecting nearer to the 10MB/s read throughput listed on the packaging, and the 2MB/s write.  Now Sandra scores must be taken with a grain of salt, as they sometimes do not accurately represent real life numbers.  So we decided to run our own test by sending 256MB’s of data and 512MB’s of data to the drive.

Looks pretty close to the benchmark reading of 10MB/s Random Write.  Not bad all in all.

Now onto the fun tests. We decided to test the indestructibility of the flash drive to see how it would hold up to the rigorous general lifestyle of a normal(or not so normal) person. LR will copy 512MB’s of data, as well as read the original data to make sure there is no corruption on the drive.

The weight test: 190 pounds of brute force applied vertically to the defenseless drive.  How does it hold up?  Passes with flying colors.

The chillllllly test: Setting E on the Freezer, the coldest of cold!  One hour damned to eternal freezation.  No sweat, the drive does perfectly fine.

The hellfire test: 150 Degrees F on the Oven, a very hot day in the desert, before we crank it up to a blistering 200 degrees!  The drive does it flawlessly without a croak.  We are sure it could have gone higher, but unless you are dropping your drive into a bed of lava, it is not needed.

The Ice Cube test: Submerging the drive in water, and then freezing it. Let’s thaw out and see how it is doing.  Out comes the frozen block… 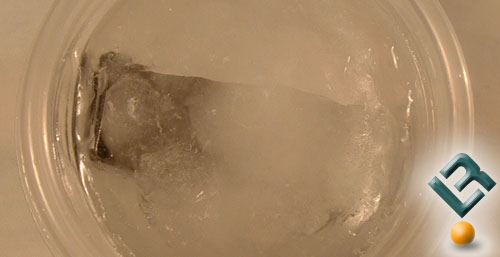 And it still works.

Let’s go on to our final thoughts on this marvelous product.