During the benchmarking process, we will run the Intel i5-4690K at both a stock speed of 3.5Ghz and an easy overclock to 4.4GHz. This is a very moderate overclock, and spending more time you would most likely be able to overclock it a bit more. 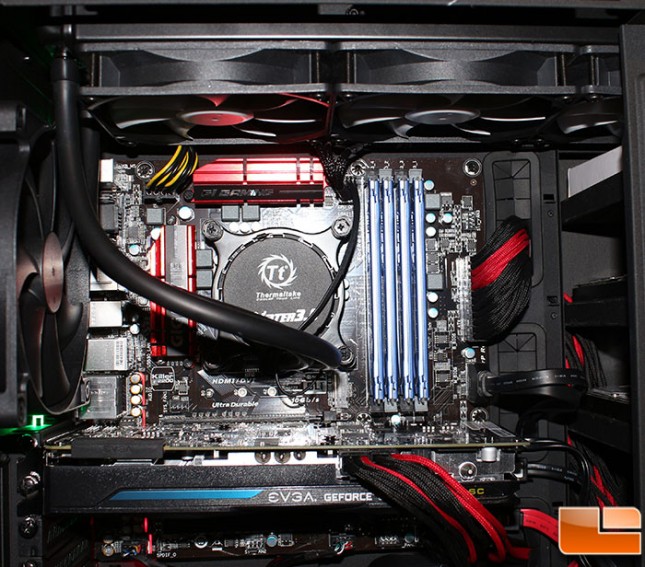 This is the first liquid cooler I have had the opportunity to benchmark, however I do have access to a Corsair H105, which will be included on the charts. While not a perfect match it can show the difference between a popular 240mm AIO cooler and a 360mm AIO.

For benchmarks, we will be using several synthetic and real-world benchmarks to perform various levels of CPU utilization. These benchmarks include Prime95, 3DMark (Firestrike Extreme), and FarCry 4.

Benchmark Results: I expected the Thermaltake Water 3.0 Ultimate to outperform the Corsair H105 purely due to it’s size; going from a 240mm to a 360mm radiator, which gives additional surface space for the liquid to cool, and another fan to help it cool. In each of the tests that were done, it did outperform the Corsair H105 by a couple of degrees Celsius. Could that difference in temperature be explained by the difference in fans between the two coolers? That’s hard to say. What we can verify is the difference in thickness between the two radiators; the Corsair H105 is 38mm, while the Thermaltake Water 3.0 Ultimate is 27mm.

To measure power consumption, a Kill-A-Watt meter was hooked up to the computer at the wall outlet. The computer was allowed to sit at the desktop for 30 minutes without any additional software running and used the average whole number that the meter displays. While running the Prime95 test, we grabbed the power consumption the same was as the Idle method from the Kill-A-Watt meter.

Benchmark Results: For power usage, at Idle there was no difference when adding the third fan. Once Prime95 was run and the fans spun up, there became a small difference. At Normal clock speeds, the fans on the Corsair H105 was pulling three Watts more than the three fans on the Water 3.0. That changed when the system was overclocked, and the Thermaltake fans started pulling seven Watts more than the Corsair fans. Not a big difference in power usage.