Impressed by the performance on the test bench I thought it would be nice to upgrade one of the office computers, so I took the Eliminator off the test bench and that is when the problems started to happen. The thumb screws and stand-offs were of poor quality and actually snapped off during removal.  It turns out that I’m not the only one that have broken the mounting hardware as one of our forum members, HONkUS, has snapped off his thumb screws and posted pictures of his adventure in the forum. The thumb screws and stand-offs that are being used by CoolIT are of low quality and in my opinion need to be replaced ASAP. Here is a picture of my thumb screw that broke off flush with the stand-off.

After hearing multiple reports of the mounting hardware breaking, I got in contact with CoolIT CEO Geoff Lyon, and  told him the problems that I’ve seen and heard.  He was very receptive to the feedback and let us know that any customers that have faulty mounting hardware can contact CoolIT directly to have the bad parts replaced for free.

With the thumb screw snapped off flush in the stand-off I went to the local hardware store and bought some new hardware that was made with real steel and replaced the aluminum parts that broke. I then cracked open the office PC and noted that a cleaning was needed! 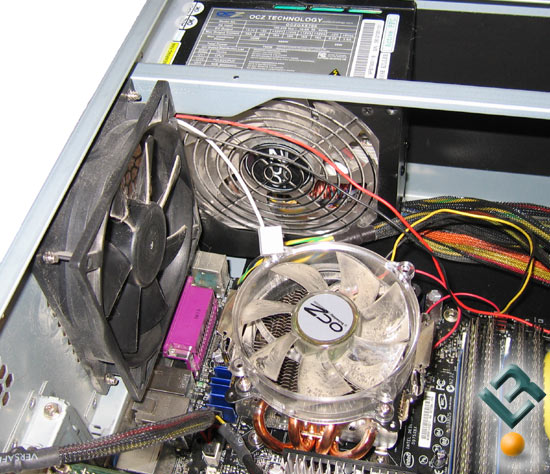 I pulled out the OCZ Tempest heat sink and removed the 120mm exhaust fan and cleaned out the case with compressed air. 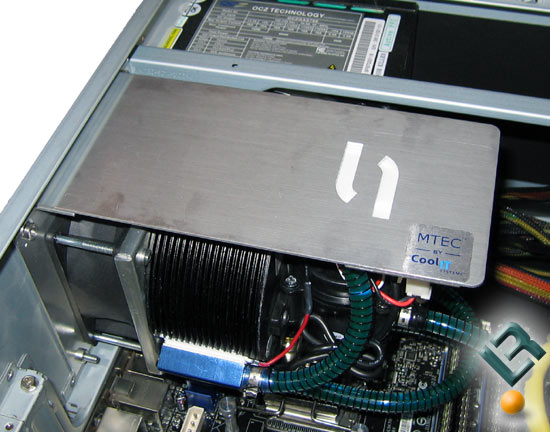 Now that looks better! Just for fun I took some load and idle scores and this time did them at low, medium and high as running the Eliminator on high was a bit too noisy for daily use. For daily the office PC runs an Intel Core 2 Duo E6700 with on an Intel D975XBX motherboard.  Four 1GB Corsair PC2-8500 Dominator modules occupy the memory banks and an OCZ GameXstream 700W power supply provides the juice. The Core 2 Duo E6700 runs overclocked at 3GHz (300MHz x 10) with 1.3V. 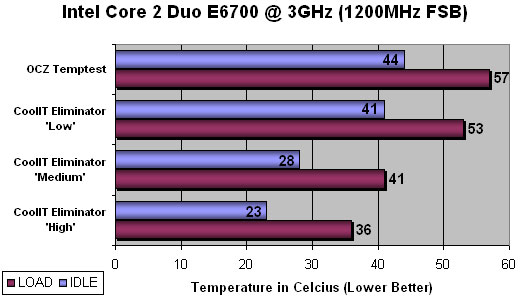 Running the Eliminator on low was a only a little bit better than the air cooling provided by the OCZ Tempest, but on medium and high the difference was great.  For daily use I have been leaving it on medium and have been happy with the results.  The fact that I had to make my own mounting hardware is a bunch of crap and I hope that someone at CoolIT will look into using better quality components.