I’ve been writing computer hardware reviews full time for nearly five years now and at times it’s tough to get excited about looking at new products. When it comes to CPU coolers there is only so much to say about a chunk of metal with cooling fins and a fan! Last week I had the pleasure of looking at the Vigor Monsoon II Lite Active TEC cooler and was excited to see that TEC coolers are starting to mature and finally starting to come down in price. With that review out the door, I was able to focus on another unique cooling product from CoolIT, the Eliminator CPU Cooler. I’ve recently written articles on CoolIT’s USB Beverage Chiller and RAM Fan, which are both specialty cooling products that are aimed at a specific niche of consumers and the Eliminator is no different. 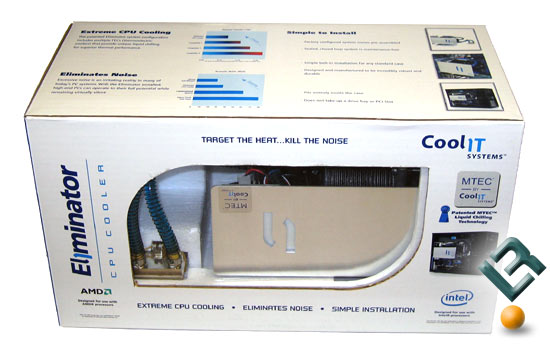 The CoolIT Systems Eliminator CPU Cooler features a relatively high MSRP of $199.99, but separates itself from the hundreds of coolers already on the market by a using set of thermoelectric coolers (TEC’s) to help cool water that is being pumped through the cooler. The Eliminator utilizes a multitude of components to cool both AMD and Intel processors on this universal CPU cooler. The designers at CoolIT have managed to assemble a fan, heat sink, water pump and three TEC’s together to make a permanently sealed cooler that shouldn’t require any maintenance over the years. 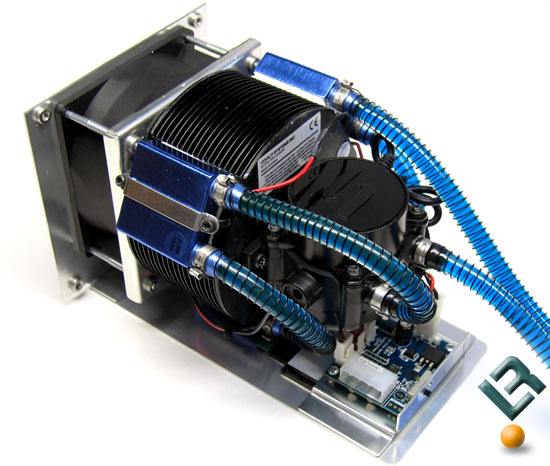 The CoolIT Eliminator is truly an awe inspiring sight with a number of blue hoses with coolant snaking all over. Trust me, when I say that this would be the last thing you’d want to have in your carry-on at the airport (unless you have a death sentence). While the guts of this cooler will be hidden once installed they are without a doubt aesthetically pleasing. 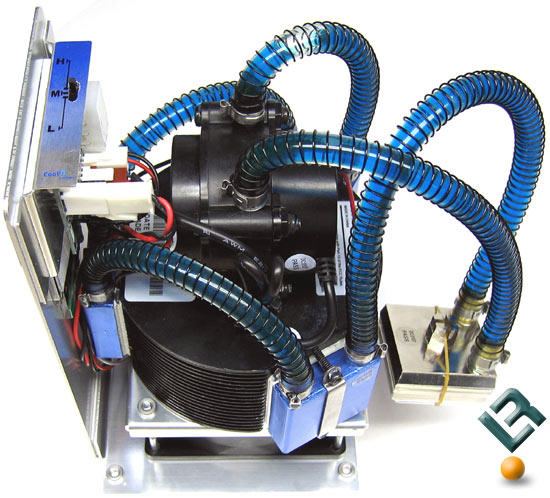 For those that are familiar with water cooling the CoolIT Eliminator uses the same basic method, but uses three solid-state TECs to cool the coolant down rather than a traditional radiator. Water is pumped from the +12V water pump through tubing to the CPU water block. Once the coolant leaves the water block it becomes ‘hot’ and is cooled down by going through not one, but three TECs. This process works really well as the cold side of the TEC plate can easily cool the water, but the heat from the hot side of the plate still needs to be handled. To get rid of the heat generated from the TECs, CoolIT uses a radial heat sink to absorb the heat. A 92x92x38mm fan then sucks air through the radial heat sink and blows the air out of the case. The fan has ceramic ball bearings and at full load runs at 34dBA, so it’s not a silent fan by any means. The cooling design implemented on the Eliminator can handle CPUs with a total heat output of up to 125W, which means the Eliminator can handle nearly all of today’s processors. 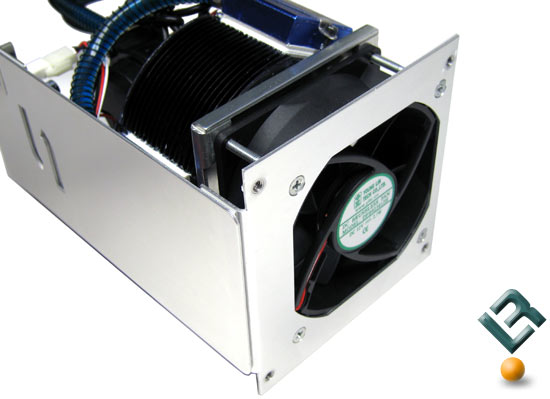 The business side of the fan is nothing more than a 92mm fan that spews out the hot air generated from the three TECs. Also seen in the picture above are the mounting screws that will secure the Eliminator to the 120mm exhaust fan that is now common on many enthusiast and gaming computer cases. 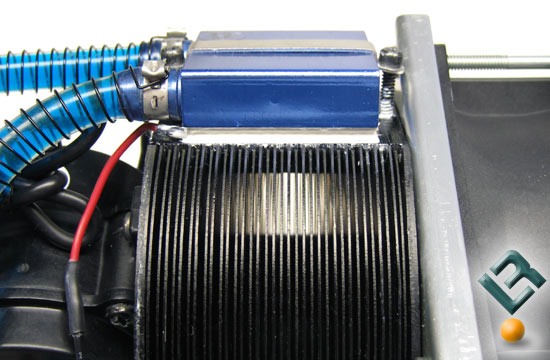 Here is a closer look at one of the TECs on the Eliminator. The cold side of the TEC is attached to the blue ‘water block’ and cools the water. The hot side of the plate is secured to the radial heat sink and thermal compound is used to help transfer the heat from the TEC to the heat sink. The TEC uses electric to work and the three TECs have a total maximum power draw of 40W, which means that the Eliminator will be power hungry after considering that power draw doesn’t include the fan or water pump.