Looking around the SteelSeries Rival 500 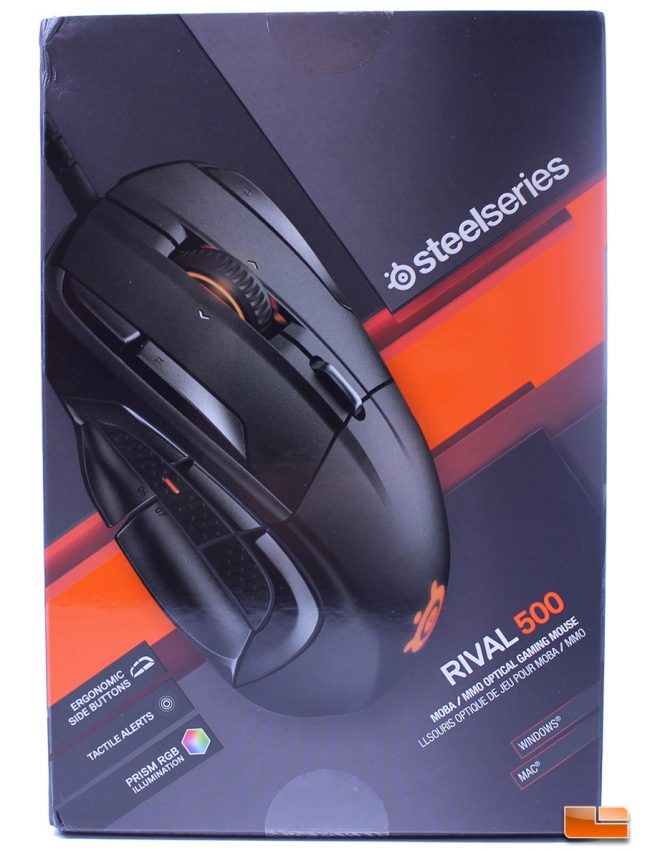 SteelSeries ships the rival in a large black box with orange highlights, which is perfect for the Halloween season and still attractive any other time of the year. Graphics touting the ergonomic side buttons, tactile alerts and RGB illumination capabilities of the mice are printed on front, in addition to Windows and MAC compatibility stickers. A gaming mouse with MAC compatibility may be laughable to some, but MAC users do have some games available and nobody is ever going to complain about having access to potentially better accessories, regardless of which platform they are on. 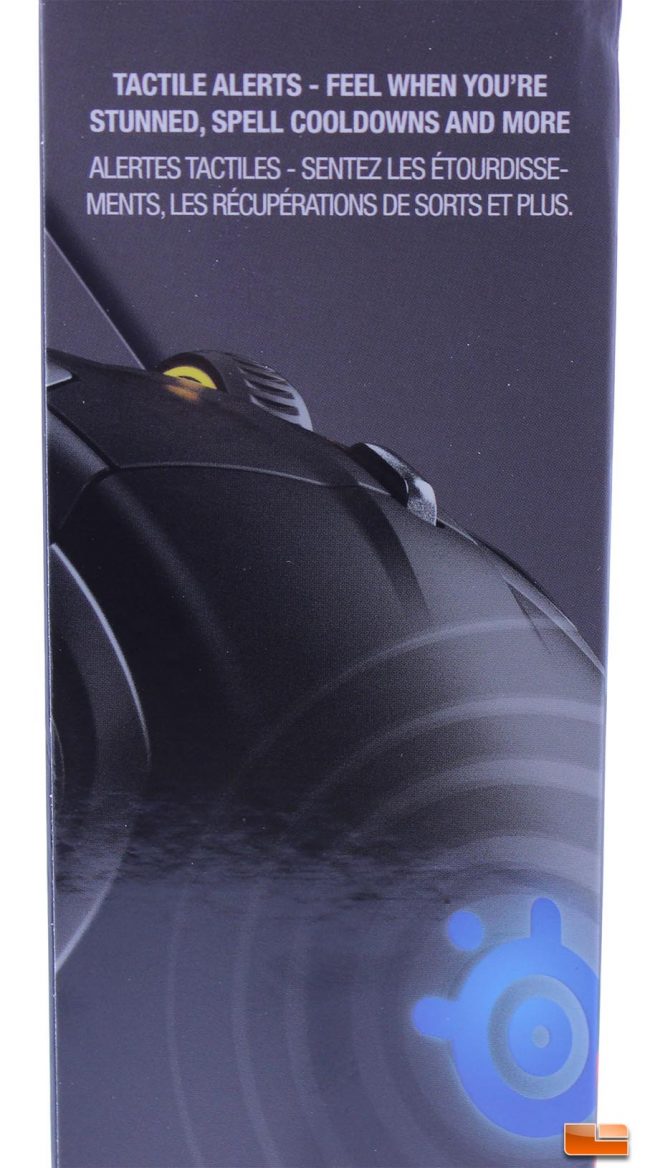 The side of the Rival 500 box explains a bit more about the tactile alerts system of the mouse, which we will certainly get into later. 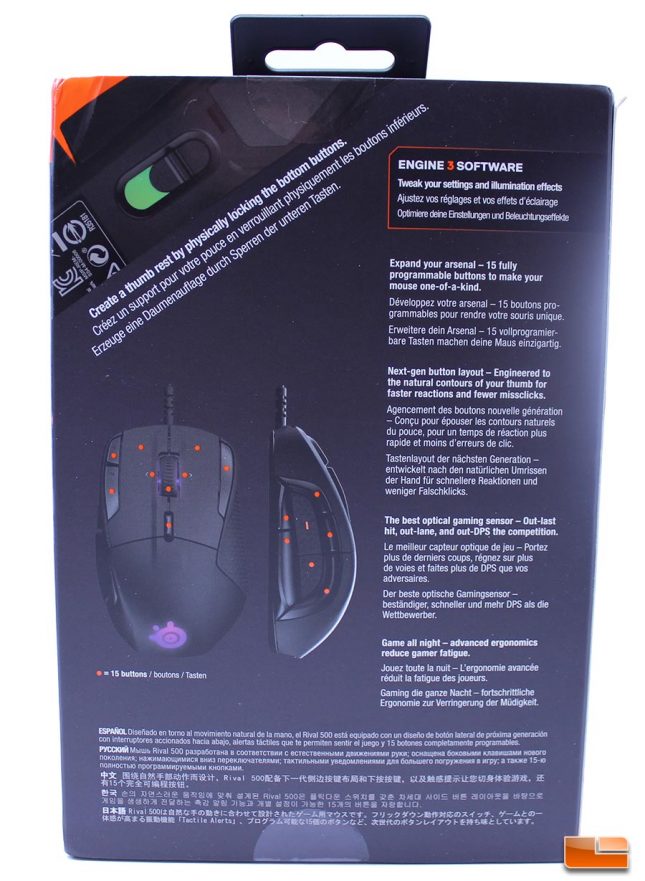 The rear of the SteelSeries Rival 500 box illustrates the fifteen buttons of the mouse and explains the slide lock on the bottom of the mouse, which can be used to turn the slide-to-click buttons into a thumb rest.

Overall, SteelSeries has done a great job of packaging the Rival 500. All of the pertinent features are pointed out and the package is attractive, while remaining subdued enough to remain classy in a sea of gamer-oriented peripherals screaming with obnoxious colors and loud logos. 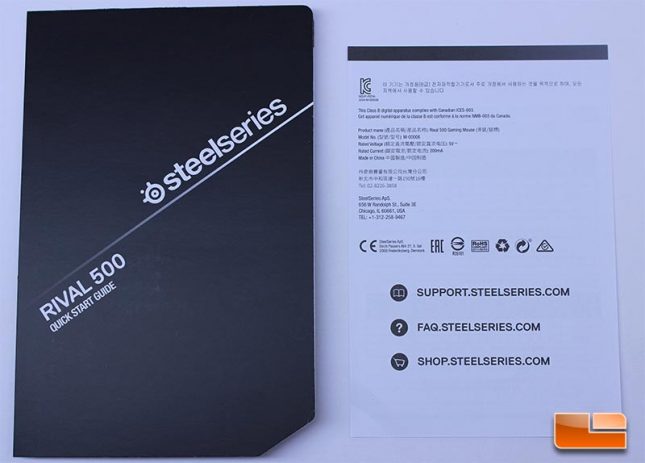 Inside the box, SteelSeries includes a quick start guide printed on thick card stock and a small certification guide. The quick start guide is really simple and basically tells the user to plug in the mouse and download the SteelSeries Engine 3 software. Curiously, there weren’t any SteelSeries stickers in the box, which is an odd omission that I am not sure is unique to our sample. Every other SteelSeries product we’ve reviewed or purchased has included stickers, including their QCK XXL and other QCK mouse pads. With that said, please don’t ever let a set of stickers influence your purchase of a mouse, we’re merely pointing this out because we’d hope SteelSeries would include stickers with an $80 mouse when they include it with their much less expensive products. 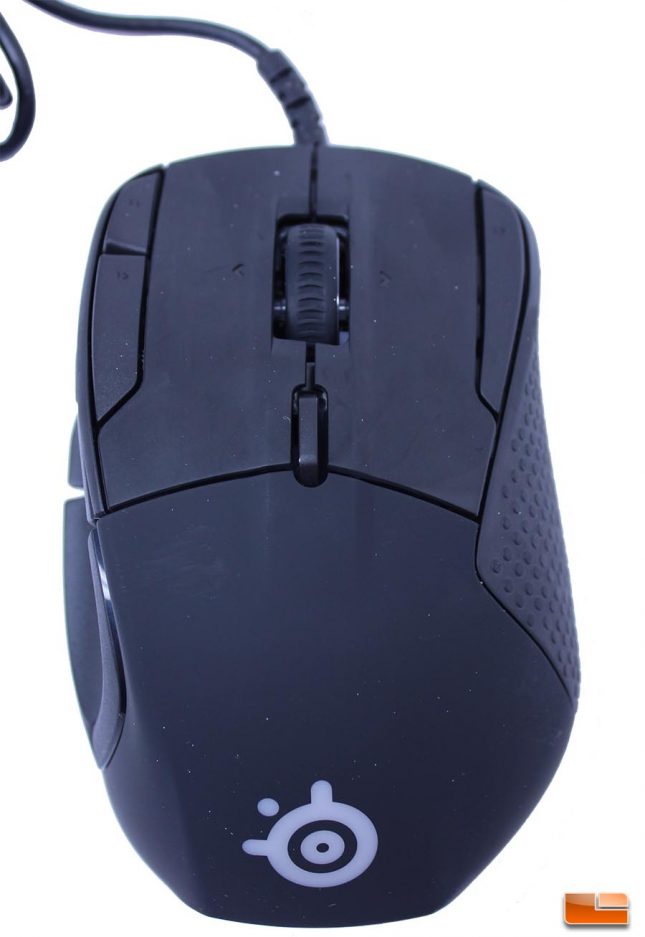 The Rival 500 has dimensions of 4.68(L) x 3.08(W) x 1.71(H) inches / 118.75 x 78.34 x 43.34 mm. It’s just slightly larger than the Rival 700, but it also has fifteen buttons, so the trade-off is understandable. The Rival series of mice in general have a pretty tall arch, so small hands may not feel comfortable. Weighing in at 129.7 grams, the SteelSeries Rival isn’t exactly a light mouse, nor is it absurdly heavy. This mouse has been designed for MOBO/MMO use and while this doesn’t disqualify it at all from FPS use, its weight definitely is noticeable compared to mice like the Mionix Castor, which was my daily driver. 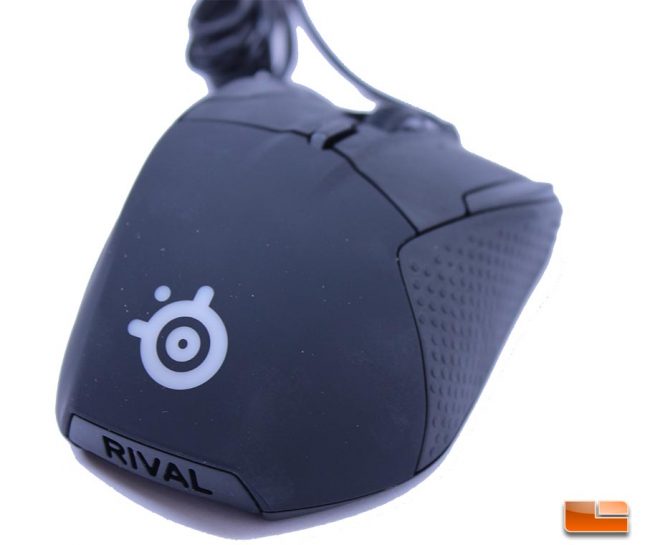 The rear of the SteelSeries Rival 500 drops down somewhat sharply from the top and features an RGB SteelSeries logo. There is also a removable rubber nameplate that SteelSeries offers 3D printer files for users to be able to customize their own nameplate with whatever else they please printed on it. Running your finger over the SteelSeries logo, you will notice it is not flat and you can feel where the plastic has been cut out. This isn’t an issue and not really noticeable during use unless you’re ridiculously sensitive.

The rubber side grips of the Rival 500 feel excellent and allow for great control of the mouse. My hands sweat quite a bit when gaming and I didn’t have any issues gripping the Rival 500. Its shape makes it perfect for claw grip, though I felt completely at home using palm grip on the Rival 500 and felt like it was really easy to go between the Rival 500, Logitech G403 and Mionix Castor without feeling like on particular mouse was more comfortable or better tracking than the other. The weight balance of the Rival 500 seems pretty decent, with it being weighted equally from front to back, though the bulk of the mouse did make it less nimble than the other mice I’ve got. The mouse glided without issue on our Steelseries QCK mousepad and had an overall sturdy feeling that is reminiscent of the other Rival series mice.

The side buttons all offer very satisfying clicks and offer a proper amount of resistance against accidental clicks, while remaining easy to click when necessary. In comparison to other mice, where a telephone-like number pad is used, the Rival 500 and its side buttons are quite satisfying to use and the ability to identify which button is which is light years ahead of what you get with the old number pad style mice, especially when you first start using the mouse and haven’t familiarized yourself or built muscle memory up over months or years of use. 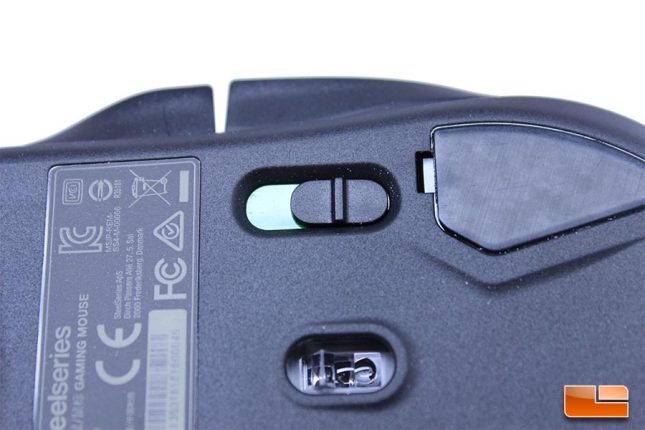 The click-down buttons that rest directly beneath the thumb offer a satisfying click and are very easy to reach. The slide lock on the bottom of the mouse can lock these buttons, at which point they turn into a thumb rest. This thumb rest is sturdy and the buttons have very minimal give or wobble once the lock has been initiated, which was a surprise to me. With the buttons being pretty hard to accidentally press and the mouse offering a natural shape, they already felt like a nice resting point without the lock, but the lock will ensure even the laziest hands don’t accidentally click those thumb buttons.

The Rival 500 has independent main left and right buttons manufactured from reinforced plastic that are separated from the body of the mouse, which should offer better click responsiveness and sturdiness. The main left and right buttons, while not mushy, didn’t have the crisp clicks provided by the Logitech G403, though they were on par with the Mionix Castor. The finish of the buttons is soft and feels great under the fingers, while still offering decent grip. The click latency and responsiveness of the Rival 500 were fine, we just felt like the main buttons could have been a little more crisp. The mouse wheel offers satisfying, crisp, responsive clicks and excellent, tactile ratcheting action. The DPI switch is an an excellent position and it isn’t easy to press on accident. We never experienced any accidental DPI shifts due to it being placed between the left and right mouse buttons. 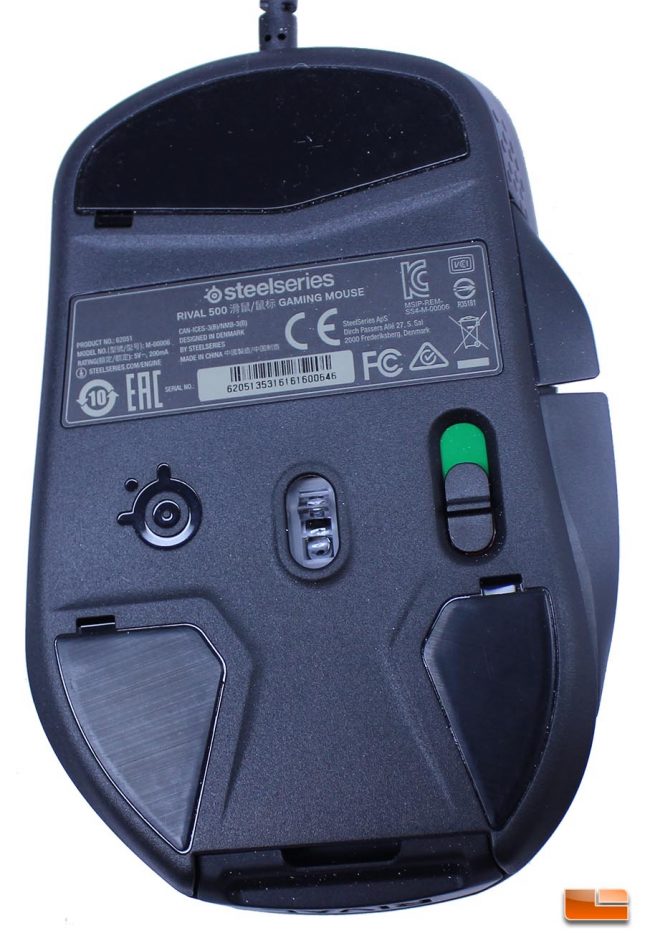 The Rival 500 uses the same Pixart 3360 sensor that the Rival 700 uses. This sensor offers excellent tracking along with no acceleration and has become a favorite sensor among competitive PC gamers who rely on accurate tracking. The tracking offered by the Rival 500 was excellent, with no jitter or acceleration detected during normal use. I do think that the sensor placement was a bit off-center and didn’t feel completely balanced when compared to the Logitech G403 and Mionix Castor, but overall, the tracking and experience provided by the sensor were satisfying. CPI and Lift off distance can be adjusted by the user with the SteelSeries Engine 3 software, as well, giving the user true control over the mouse and its excellent sensor. The feet on the bottom of the Rival 500 are very smooth and cover the back corners and front of the mouse bottom. The Rival 500 glided nicely over our SteelSeries QCK thick mousepad, so the mouse feet certainly were doing their job. SteelSeries has placed flat machine marks into the bottom of the mouse to allow for easy removal of the feet, should they need replacement. 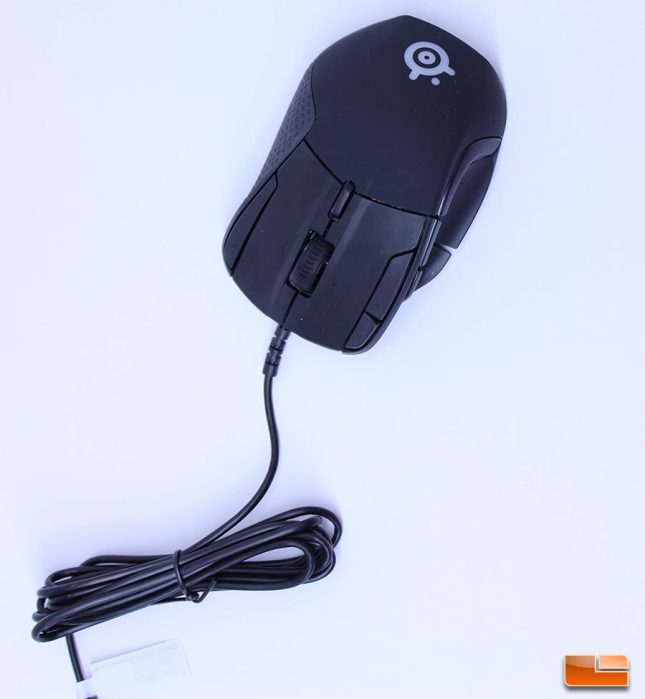 The cable included with the Rival 500 is thin and has a nice rubber coating on it. It attaches very securely to the front of the mouse and doesn’t have any issues snagging or causing drag. The mouse strain relief here is huge and I am not sure that SteelSeries needed to go with such an extreme approach, which no doubt adds to the weight of the mouse. The cable worked perfectly fine with our Gamdias monitor mounted mouse bungie. 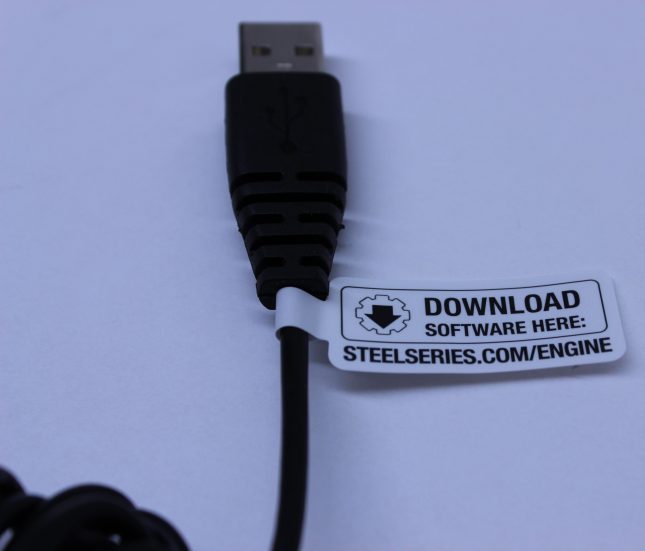