I’m sure gamers can relate to at least one experience with a mousepad that isn’t large enough; an annoying and sometimes unpleasant feeling when the mouse goes somewhere it shouldn’t. Fortunately, there are so-called gaming mousepads and they’re actually nice to have. Their characteristic large size offers an ample surface and forgiving space for a gamer’s mouse movements, compared to the more typical mousepad that might be smaller than a dinner plate. What we have for review here is an exaggeration of that end to the need.

I’m sure some people have some fair use for the QcK XXL, SteelSeries newest and largest mousepad ever released. Measuring 900 by 400 mm (35.4 by 15.7 in), this nearly 3 foot long cloth surface can fit more than a mouse and keyboard. 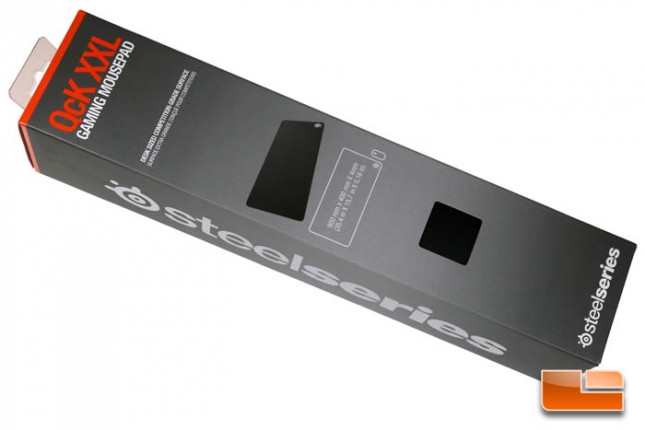 The QcK XXL is packaged in a big box. That’s a banana shown for scale. 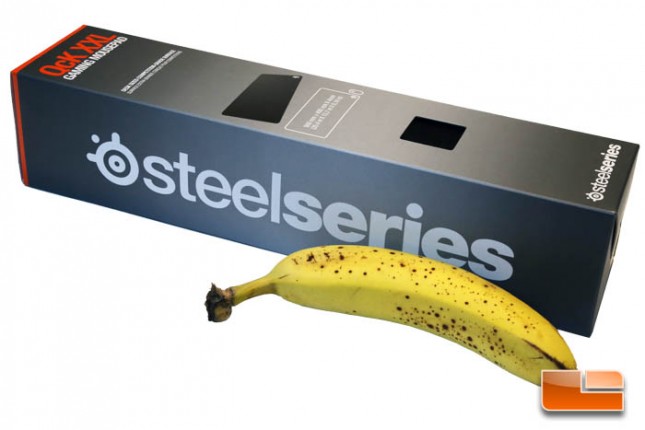 As a note on whats included in the box, the QcK XXL comes with some SteelSeries stickers you can put on your lunchbox. 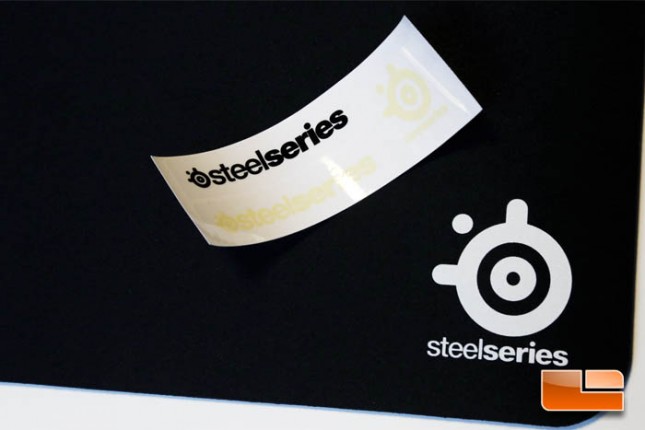 At 4mm thick, it’s going to roll out and sit flat on the table like SteelSeries other thick mousepad, the QcK Mass. With so much mousepad in contact with the table, the nonslip rubber base just holds on even if one so much tries to make minor adjustments to the positioning. 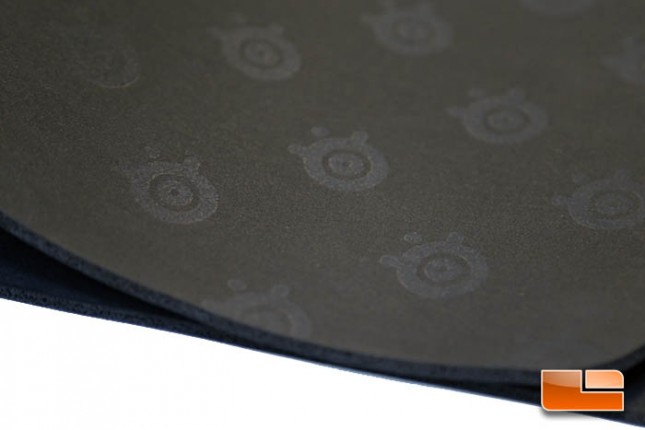 The QcK XXL looks bigger in person than these photos can show. If this mousepad was perfectly rectangular without rounded corners, the diagonal length would be nearly 38 inches which is larger than most desktop PC monitors out there. Laying a modest keyboard on top hardly takes up space. 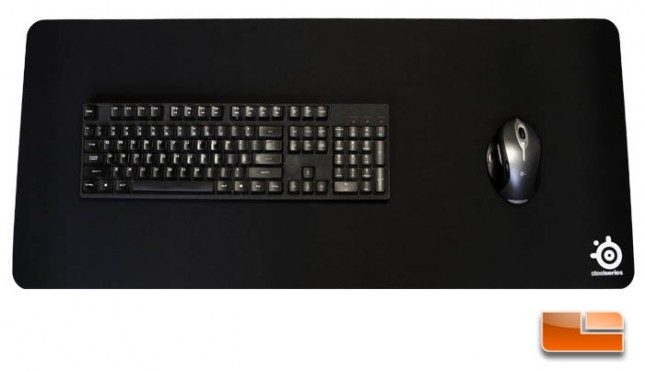 With so much surface estate, the QcK XXL looks more fitting when paired with a bigger keyboard. 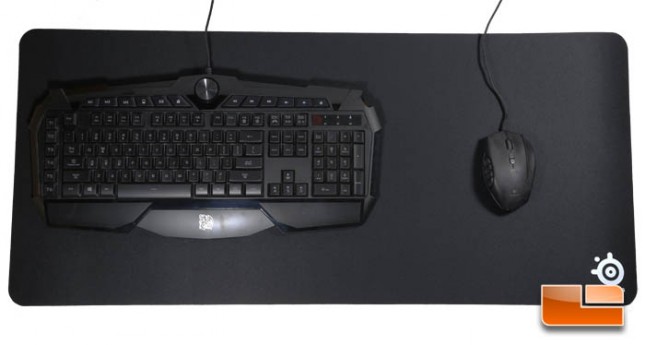 The QcK XXL sells for $39.99 on Amazon which is decently reasonable for the amount of mousepad material that you get compared to the $26.99 QcK Mass and even compared to other desk-huge mousepads. The Razer Goliathus Extended ($33.99) and Corsair MM200 Extended Edtion ($31.99) both have dimensions close to 900x300mm which puts the SteelSeries Qck XXL at roughly 30% more surface since it is 900×400 mm. The smaller mousepad in the picture below is the standard QcK flipped back side up. 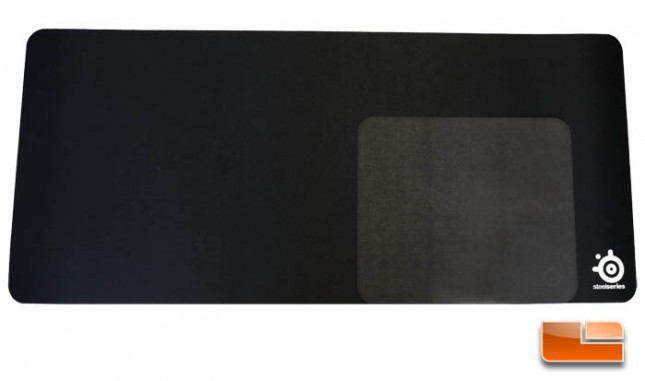 For some other uses, the QcK XXL makes a fine card playing mat. 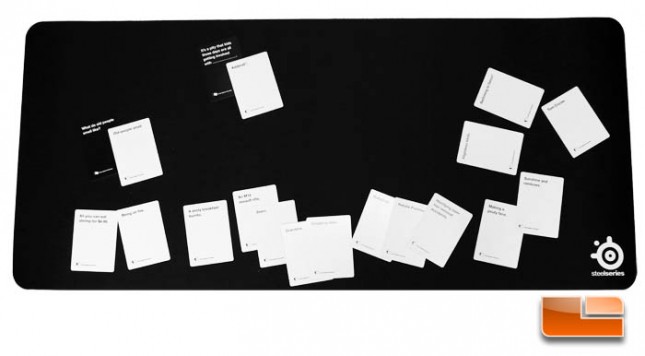 Though eating on or near it is probably not a good idea, the QcK XXL is washable if you make a mess. Just rinse in cold water and let it air dry. 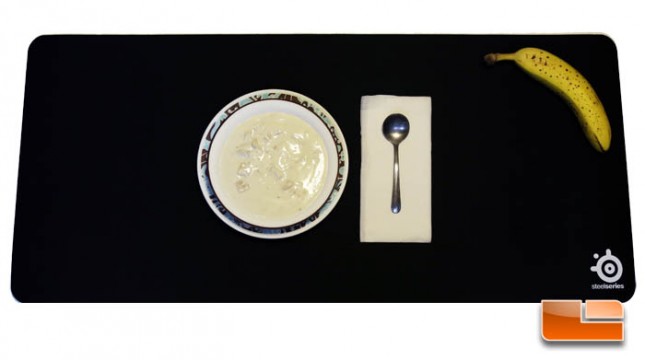 With regards to longevity, the QcK XXL is likely to last a long time. I myself have been using a SteelSeries QcK mousepad for half a decade of frequent gaming and it’s only barely fraying along the front edge. Yet, the cloth surface is still in great shape and the base still grips the table. 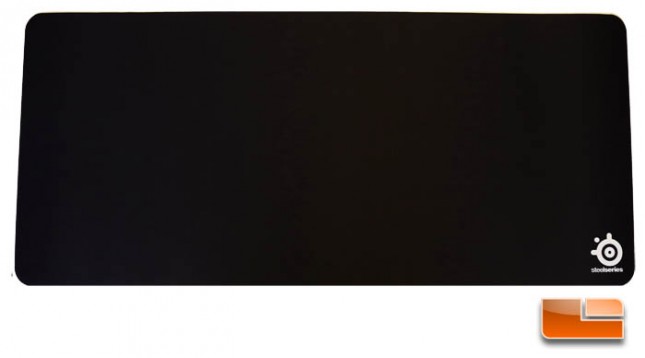 For our closing thoughts, the SteelSeries Qck XXL is right up your alley if you’re looking for the practicality or aesthetic of a very large mousepad, in a size SteelSeries calls desk-sized. The soft cloth and thick padding is gentle on both the wrist dragging the mouse around and the wrist resting at the edge of the keyboard. Putting a collection of computer peripherals and accessories gives a slick unified look. For now this mousepad is built thick with a cloth surface like the QcK Mass and so those wanting a hard surface or thinner material will either have to look elsewhere or improvise with materials. Our biggest suggestion for interested buyers is to double check their table space. The QcK XXL is huge.