Let’s take a look at our temperature testing results under stock and overclocked conditions.  All heatsinks are tested with fans at 100%. 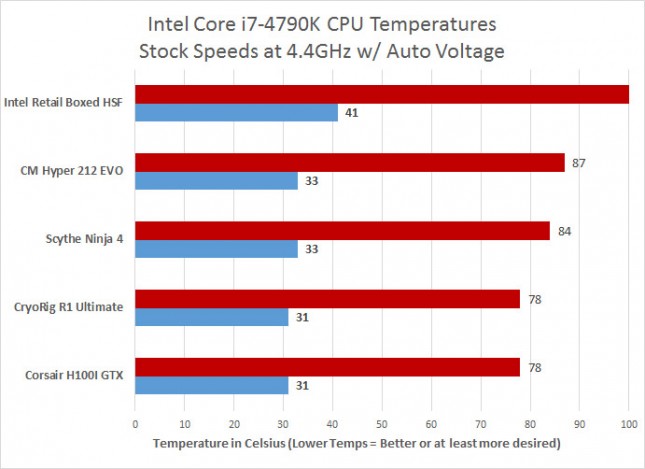 Here, we see positive results, with the Ninja 4 matching up with the Hyper 212 Evo on the idle temperature reading. When running at stock settings, Prime 95 is still able to put quite a bit of stress on the CPU, causing the stock cooler to reach its thermal limitation.  The Ninja 4 was able to keep the CPU at 84 degrees maximum when running at stock speeds, which put our voltage to 1.224v with the CPU reaching the 4.4GHZ Turbo frequency specification of the I7 4790K when under full load. 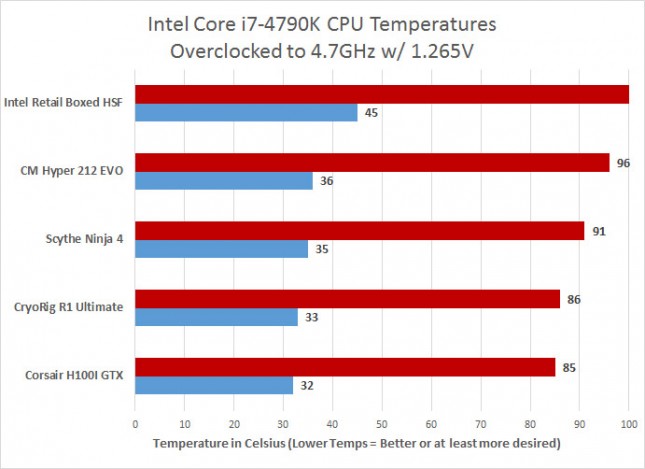 Our idle temps are in line with what we expected, besting out the stock solution and the Hyper 212 Evo, while trailing behind the more expensive CryoRig R1 Ultimate and Corsair H100I GTX units. We were very happy with the overclocked temperature results achieved by the Scythe Ninja 4.  It was able to handle our I7 4790K running at 1.265v, topping out at 91 degrees with the Glide Stream fan running at 100%, which is a bit high, but still under the 100C throttle limit.  The Glide Stream fan coupled with the design of the Ninja 4 really lends itself to low noise output, as you can barely hear the fan running.  Compare this the H100I GTX, which topped out at 85 degrees, but with the fans running at 100% to achieve these results, noise levels were unbearable.  Lowering the fan speed on the H100I GTX to Quiet gave it only a one degree performance benefit over the Ninja 4 running at 100%, but even at the Quiet setting, the Corsair H100I GTX was a louder unit, partly thanks to the pump noise provided by the unit.

Keep in mind that the load temperatures we recorded under Prime 95 are a worse case scenario, as a system will never really reach the levels of stress put on by Prime 95 under normal usage.  For example, after an hour of playing Rainbow Six Siege at our overclocked settings, we found our CPU topped out at 67 degrees with the Ninja 4 installed and fan running at 100%.