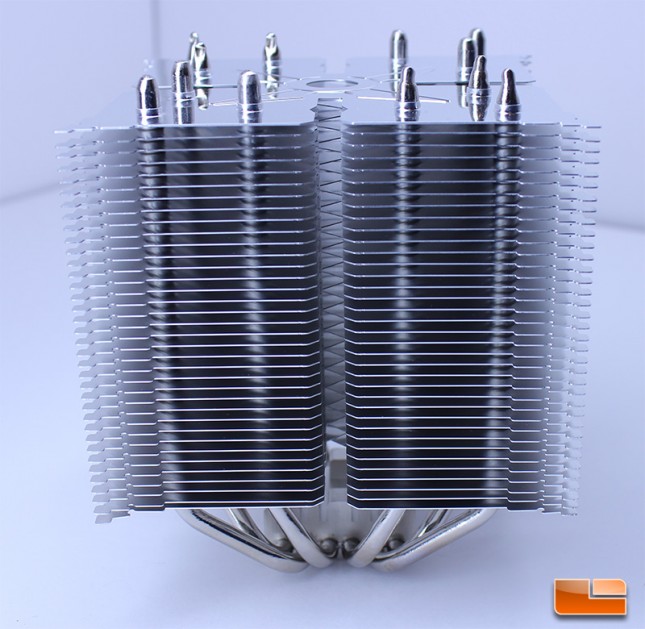 Scythe was able to include more fins (36) in the design of the Ninja 4 versus its predecessor while dropping the weight of the unit, as the Ninja 3 weighed in at slightly over 1000 grams with a fan, while the Ninja 4 weighs in at 900 grams with the fan installed and 780 grams without it.  The low resistance provided by the open design of the towers should lend this cooler well to low noise performance, which is a staple of Scythe products.  The Scythe Ninja 4 is definitely not a svelte unit, as said before, it does weigh in at 900 grams once a fan has been installed, which is just shy of two pounds. 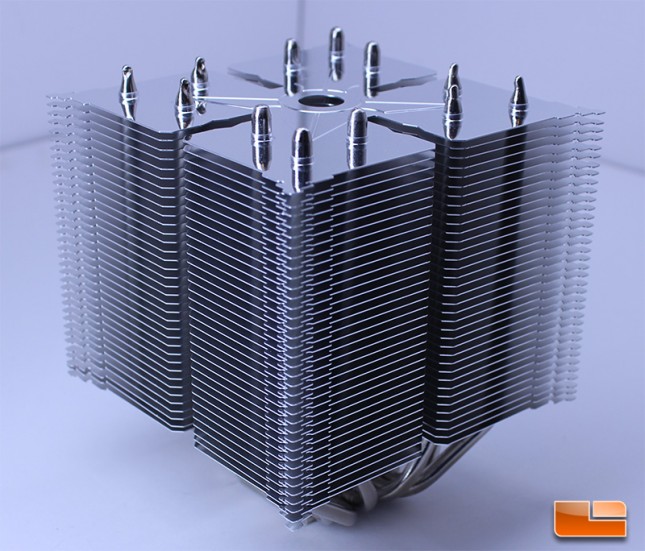 The Ninja 4 is composed of two separate aluminum fin cooling towers that cross each other diagonally, with six nickel-plated copper heatpipes each running across the towers.  Each set of heatpipes connects to the opposite side of the two-piece tower design.  You will notice there are spaces between the fin stacks on each side, which allow for air channeling, along with screwdriver access to secure the heatsink to the mount.  This is a very clean looking, functional design from Scythe and it certainly improves upon the design of the Ninja 3, offering a much cleaner look and improved performance.  Unfortunately, the sheer size of the heatsink will limit its use in certain applications. 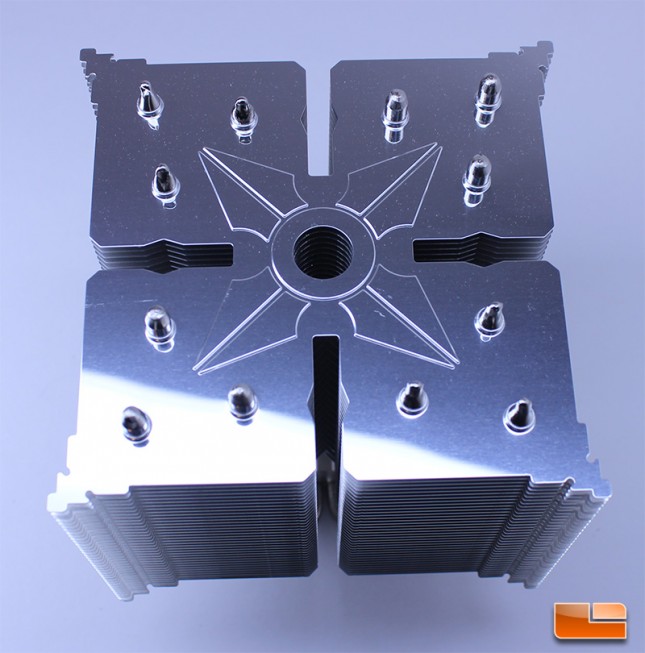 There is a shuriken (ninja star) stamped across the top layer of fins on the Ninja 4 and in my opinion, it looks really awesome and pictures do not do this cooler justice.  On the top layer of fins, you can see the ends of each heatpipe, which have been nicely nickel plated, along with the rest of the unit. 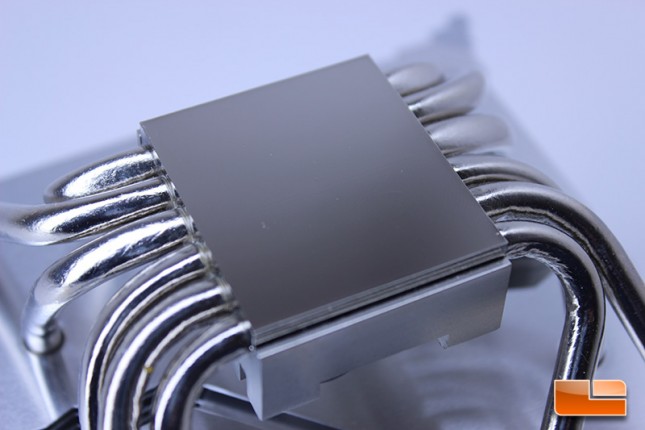 The heatpipes on the Ninja 4 do not directly contact the CPU, rather they are connected to a copper base that is nickel plated.  The bottom of the base has a very clean, nicely polished surface. 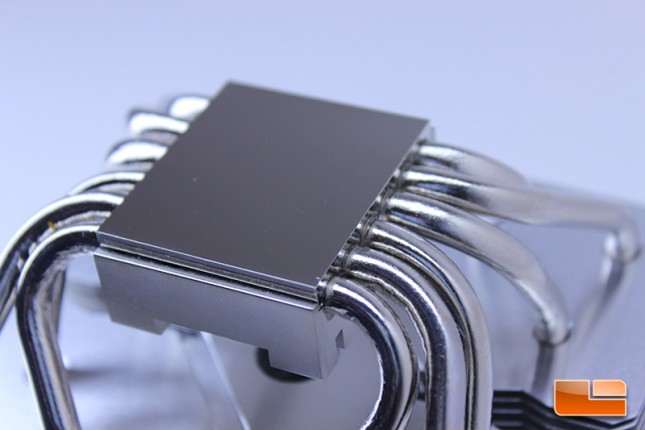 While you could certainly attempt to lap the surface on the Ninja 4, the surface is just fine as shipped and you can definitely tell that Scythe put good care into their manufacturing and QC process with the Ninja 4 from top to bottom. 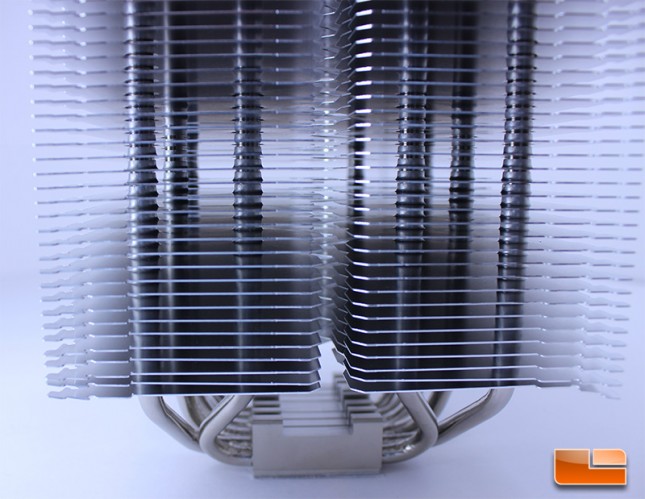 The Ninja 4 attaches to the mounting hardware by using a crossbar that goes through the groove in the base.  As you can see, the groove has been nicely cut out and machined on the Ninja 4, provided a nice, large, stable surface for the cooler to be secured to the socket. 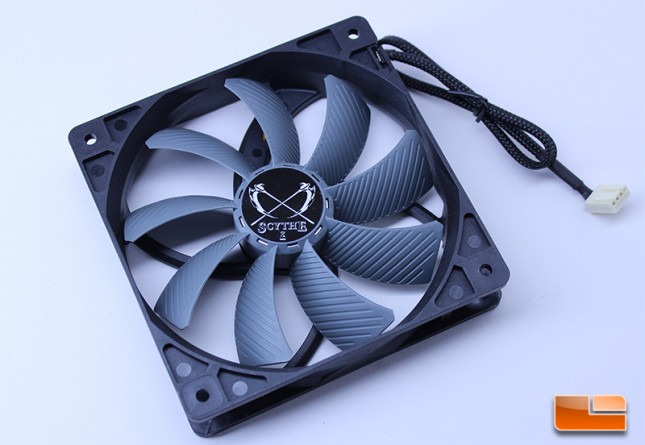 Scythe is known for producing a quality fan and the fan included with the Ninja 4 is no exception.  The 120mm Glide Stream fan is rated to provide 55.5 CFM of air at 31dBA, which while not silent, is a good airflow to noise ratio.  The individual fins on the Glide Stream fans have grooves in them that reduce wind turbulence and noise, in theory.  The four pin cable for the fan is sleeved with a braided cord that gives it a nice aesthetic appeal over bare fan wires, for sure. 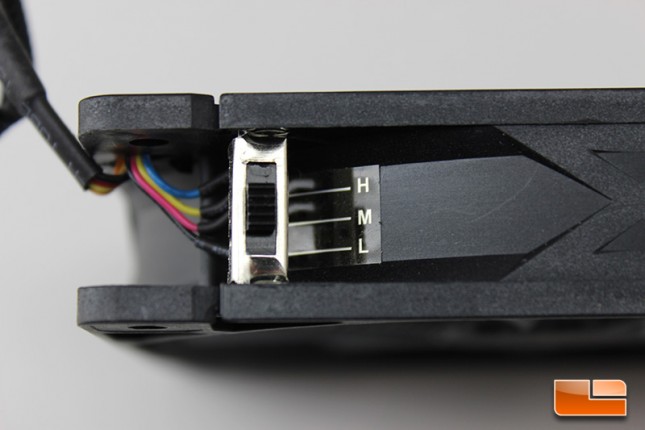 There is a small switch on the fan that will allow users to select between 1500, 1150 and 800 RPM operation, with only the highest speed being audible when sitting a couple of feet from the case.  The open nature of the Ninja 4 means that the heatsink provides low airflow resistance, which helps reduce noise output. 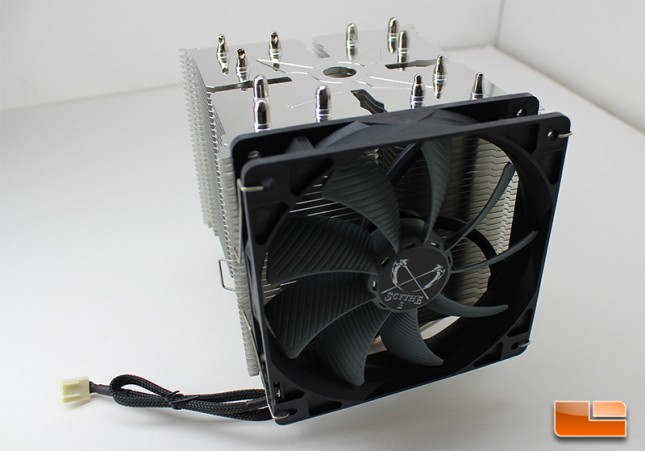 Once we’ve mounted the fan, the  Ninja 4 certainly looks great.  The Glide Stream 120mm fan had no trouble installing with the included clips and the fan looks great on the Ninja 4, providing a nice contrast to the nickel plating of the heatsink itself. 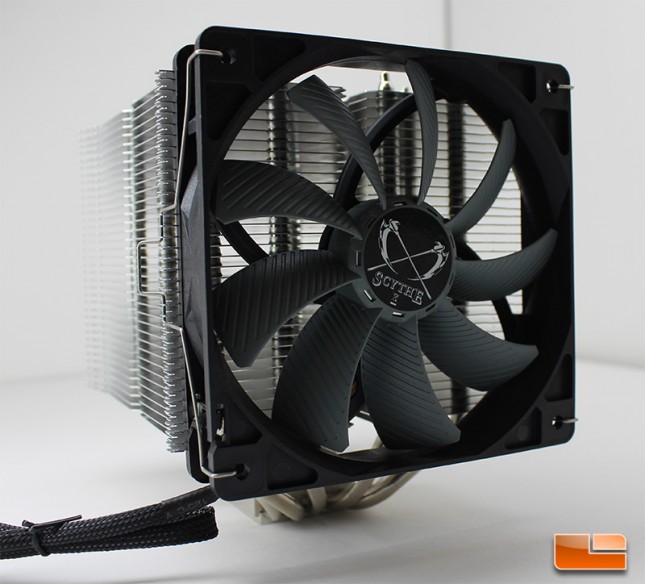 The Ninja 4 is a large, beautiful looking heatsink that is very well made.  Every aspect of the unit feels solid and well-built, from the base, to the well-designed heatpipes, to the open fins that have a great polished look to them, there isn’t anything about this heatsink that doesn’t say ‘quality.’  Now that we’ve taken a look at the Ninja 4, we’re going to install it on our I7 4790K test bed and compare it to the high Noctua NH-D15, Corsair H100I GTX and CryoRig R1 Ultimate.  Also included in our testing results is the budget champion, the CoolerMaster Hyper 212 Evo.