First we need to add files to the device for streaming.  We’ll see how well it does with file copy from a PC over the USB 2.0 connection using Teracopy. 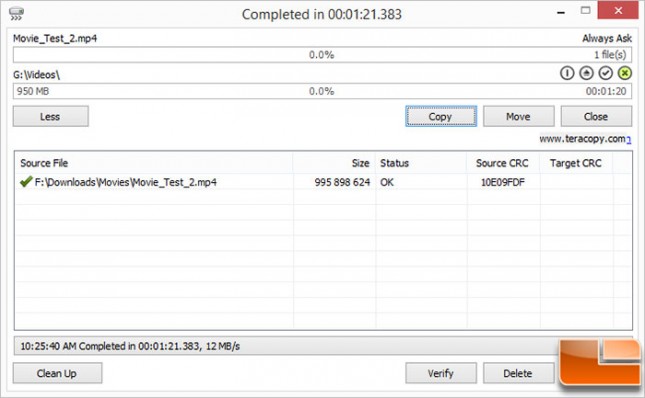 Copying a large 950MB video file took 1Minute 21Seconds to copy from the PC to the SanDisk Wireless Flash Drive, which gave an average of 12MB/s.  This matches the previous synthetic benchmarks. 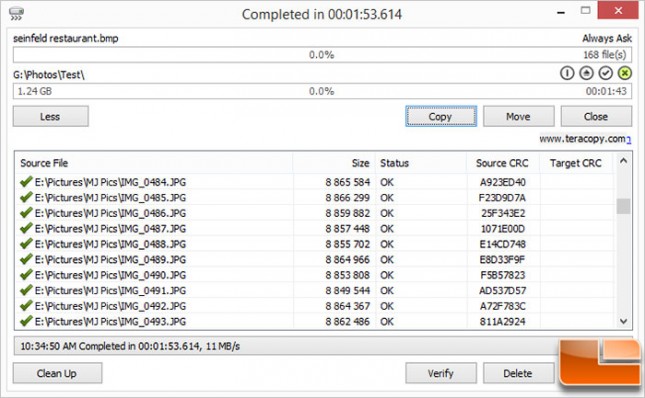 Next 1.24GB of photos were copied to the SanDisk Wireless Flash Drive, this time it took 1Minute 53Seconds, an average of 11MB/s.

Copying files from the SanDisk Wireless Flash to a mobile device a stop watch was used.  The timer was started as soon as the file copy began and stopped when it reached 100% completion.  This was done four times to verify the timings.

These results show that Wireless file copy is much slower than a USB 2.0 connection.

Watching video’s among devices is very simple, up to three devices can stream video at the same time.  A single 1080P video was streamed to an iPad, Samsung Galaxy S3 and a Windows 8 tablet.  There were no issues with the streaming of the same video to multiple devices at the same time.  On the Galaxy S3, it was easy to see how quickly it was buffering the video while it was playing.

Streaming was successful anywhere in my house, which is approximately 1,400 square feet, with walls in the way, I would estimate it reached close to 50 feet.  While this is much shorter than the 150feet SanDisk claims it will reach, I am sure that is in a perfect environment in an open space.  Just like how wireless is calculated at a best case scenario and not in a real world environment.

SanDisk states the Wireless Flash Drive has a 4 hour of video stream time per charge, to one device.  In my testing, I was able to stream two movies before the battery died.  Streaming Iron Man and Avatar (Extended Cut) totaled 304 minutes, or just over 5 hours.

If that is not enough time, the Wireless Flash Drive can be charged using a USB wall charger at the same time as streaming, or in a vehicle using a USB car charger.