Temperatures have always played a critical role on storage drives and in recent years we’ve seen it cause drives to fail prematurely and we’ve even seen some SSD performance results change for the worse if components were too hot or too cold. Since temperature is an important thing to keep an eye on we check the idle and load temperatures on all of the drives that we review. To get the idle temperature results we leave the drive sitting on an open air test bench in a room that is 19C. For the load numbers we use IOMeter to write 128KB to the drive sequentially for 10 minutes and record the top temperature. 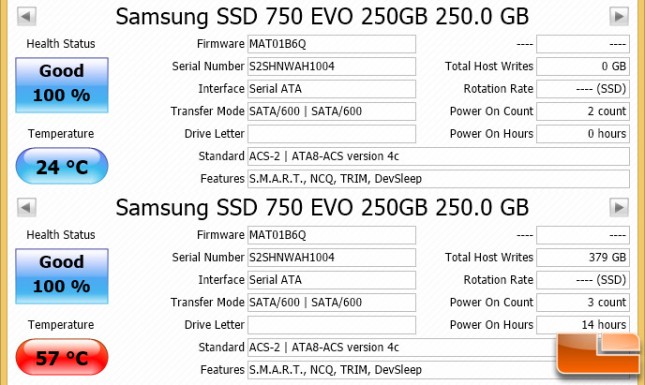 The Samsung SSD 750 EVO 250GB drive had an idle temperature of 24C and topped out at 57C when doing 10 minutes of 128KB sequential writes across the entire drive with IOMeter. The Samsung SSD 750 EVO 120GB drive was slightly cooler with an idle temperature of 23C and 54C when at full load. This is within the 0-70C operating range and isn’t anything to worry about. Our drives are tested on an open air test bench with no fans blowing across the storage drives. Proper airflow in a typical PC enclosure should lower the temperatures that we saw.