At nearly $1,500 the Sabrent Rocket Q 8TB NVMe PCIe M.2 2280 SSD is not going to be a drive that the average consumer is going to run out and buy. Heck, most gamers would be happy to spend $1,500 on an entire desktop or laptop! We get that, but we also understand that there are people out there that need as much storage space as possible. If you are a content creator or a gamer looking for storage space the Sabrent Rocket Q series having the ability to pop in a large 4TB or 8TB SSD into one M.2 2280 slot is impressive. This drive will also be appealing to enterprise users that are looking some super dense M.2 storage drives at the lowest possible cost.

The Rocket Q series is currently available in five capacities ranging from 500GB all the way up to 8TB. Sabrent is very aggressive with pricing with the Rocket Q series and pricing starts at just $69.99 and goes up $1,499.99. They have a drive for every price point and once registered, they are backed by a 5-year warranty!

When it comes to performance the Sabrent Rocket Q 8TB is rated at up to 3.30 GB/s read and 2.90 GB/s write speeds. We benchmarked the SSD as the primary boot drive and filled it 55% full before we did any testing on it. Despite being over half full we managed to reach 3.24 GB/s read and 2.81 GB/s write on ATTO Disk Benchmark. That is pretty darn close to the drives rated speeds and we are happy with the performance numbers that we are seeing from it. 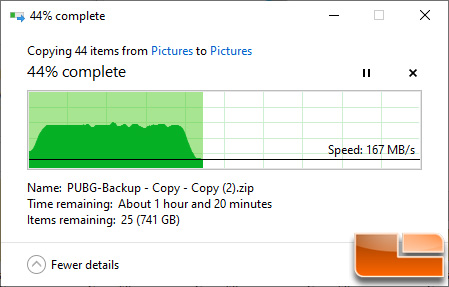 When copying over 1TB of files to fill the drive we noticed that the sustained write speed does drop down to around 167 MB/s once the SLC cache of the Rocket Q is filled up. The SLC cache size is not advertised by Sabrent, but it appears to be around 500GB in size. This is one of the reasons that the Sabrent Rocket Q 8TB drive does so well in many of the synthetic and real world benchmarks.

If you are looking for a massive amount of storage space in an M.2 2280 form factor NVMe drive, the Sabrent Rocket Q 8TB is certainly recommended. It also happens to be the only 8TB drive available in this form factor from any brand!