The Sabrent Rocket Q appears to be a decent low-cost NVMe SSD that uses QLC NAND Flash memory. We’ve been watching this drive closely since it came to market in November 2019 as the 1TB model entered the market at just $99.99. It looked set to disrupt the market as many thought that surely the price would decrease as time went on. Well, pricing has actually been going up on SSDs due to NAND Flash shortages! Pricing on the Sabrent Rocket Q 1TB is now priced at $110.99 shipped and yet despite the price increase it remains the #1 new release on Amazon for internal SSDs. That might be due to the fact that it is the lowest priced 1TB NVMe drive that we could find on both Amazon and Newegg!

The performance of the Rocket Q SSD is respectable for being the lowest priced 1TB NVMe drive on the market at this point in time. Sabrent Rocket Q 1TB drive maxed out at 3,260 MB/s read and 2,080 MB/s write in CrystalDiskMark 7 during our benchmarking, which exceeds the drives top speed rating of 3,200 MB/s read and 2,000 MB/s write. Those are impressive sequential read/write performance numbers considering this is starting point when it comes to NVMe drives here in 2020.

Although, we’d like to point out that for an extra $10-$20 you can purchase the original Sabrent Rocket 1TB drive. The Rocket 1TB drive (TLC NAND) is a bit faster as it can reach up to 3,400 MB/s (Read) and 3,000 MB/s (Write). Both models use the Phison E12S controller, so the big difference is that the Rocket Q uses QLC NAND Flash and the Rocket uses TLC NAND. The Rocket with TLC NAND Flash is faster in all of our benchmarks and has more than six times the endurance. Despite the difference endurance ratings, both drives are backed by a lengthy 5-year warranty if you register them within 90-days. Our readers are usually enthusiasts that are often willing to pay a bit more if it is worth it.

Right now the Sabrent Rocket 1TB costs $139.99 shipped, so it will end up costing you an extra $20. If you want a faster product that is more durable then we whole heartily advise you to stick with the original Sabrent Rocket. If that isn’t in the budget we wouldn’t lose any sleep over it as the Rocket Q is still blows away any 1TB SATA III SSD and even some NVMe drives despite being the lowest priced 1TB NVMe drive. 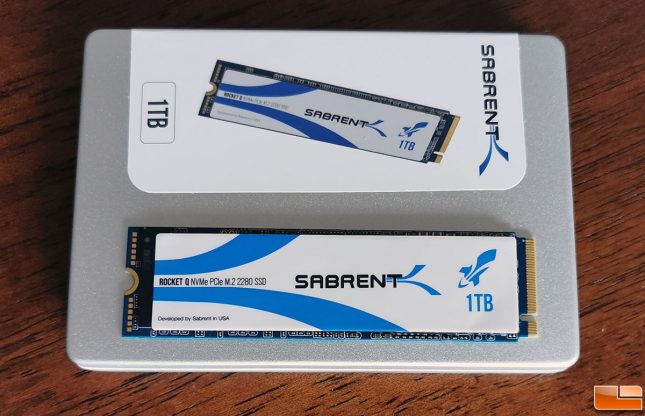 At the end of the day the Sabrent Rocket Q is a decent mainstream drive for those that aren’t worried about having the best performance or longest endurance rating around. There aren’t too many 1TB NVMe M.2 2280 drives available for at the $110.99 price point and that is likely the reason that this is the #1 new release on Amazon right now. People want to get by with spending as little as they can and the Sabrent Rocket Q is ideal for entry-level or mainstream system use where systems won’t be handling many write operations.

Legit Bottom Line: The Sabrent Rocket Q series is a solid drive with QLC NAND Flash that should work nicely for budget conscious PC builds where someone is looking for a low-cost NVMe drive with respectable performance.