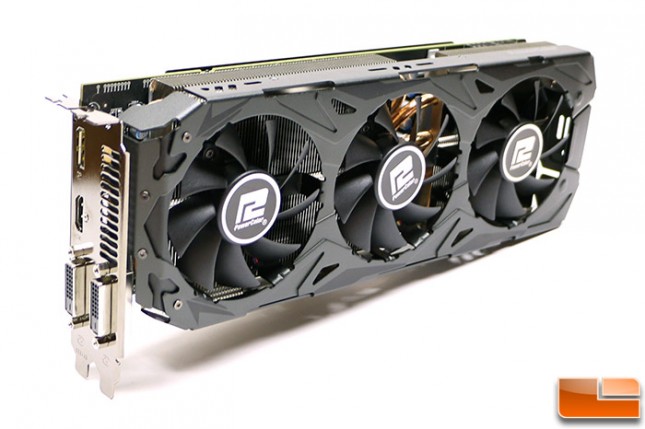 The PowerColor PCS+ AXR9 290X graphics card is pretty impressive. For starters we never saw any performance degradation over time when gaming as the card never got hot enough to throttle and that was nice to see. We are used to seeing AMD cards decrease their core clock due to PowerTune settings after 10-15 minutes of gaming as the card heats up to full operating temperature. PowerColor kept this situation from happening by slapping the largest GPU cooler that we have ever seen on a Radeon R9 290X and squashing any heat concerns that many have been worried about since these cards have come out. The heatsink is well designed and built, but the three 80mm cooling fans need to move a ton of air across the cooling fins to give you those sexy temperatures. That means there is a fair bit of fan noise and you’ll most certainly hear this card over the other fans in your system. So, you have good temperatures and in return you must be okay with the card being loud.

When it comes to performance the PowerColor PCS+ AXR9 290X ran great on our Sharp 4K monitor at 3840×2160 and we had an enjoyable gaming experience with this card in our test system. If you game at Ultra HD resolutions or on a triple-panel setup this card is aimed at you! We also found that it overclocked pretty darn good and nearly reached 1200MHz on the core with no GPU voltage increase. If you wanted to manually increase the voltage you can easily get this card above 1200MHz thanks to the beefy cooler that is able to keep the 2,816 stream processors at reasonable temperatures.

PowerColor’s Radeon R9 290X graphics card with the PCS+ cooler is sold under part number AXR9 290X 4GBD5-PPDHE and retails for around $569.99 shipped on both Newegg and Amazon. When this card was released just weeks ago it was $649.99 and the price has been decreasing nicely since. In fact, it just dropped $10 in the past week and can now be picked up for the current $569.99 price point with free shipping. This makes it $20 more than the PowerColor AXR9 290X that is listed at $549.99 shipped with lower clock speeds and the dare we say crappy AMD reference GPU cooler. We don’t expect this card to go much lower than $569.99 for the time being as it is just $20 more than thePowerColor’s base model and $180 less than uber high-end water cooled version that they also offer. It should be noted that PowerColor offers a 2-year warranty on their video cards. The industry standard is 3-years. This doesn’t raise a red flag for us, but we do know people are buying up this cards for 24/7 use with the current cryptocurrency craze. If you plan on mining Litecoins and want the longest warranty possible this might not be the card for you. No graphics card is designed to be run 24/7 at full load, so it will be interesting to see how all these AMD Radeon graphics cards hold up after a couple years of 24/7 use by the concurrency community.

If you aren’t bothered by having a card with a little fan noise and 2-year, we highly recommend the PowerColor AXR9 290X 4GBD5-PPDHE graphics card. It