The Plextor M9P Plus 1TB SSD turned out to perform better than we expected it to based on its four corner performance ratings. The Marvell 88SS1092 controller used on this model has been around since 2017 and was first launched with Toshiba’s 64-layer TLC NAND Flash (BiCS3). This is the first time that we have seen it paired with Toshiba’s 96-layer TLC NAND Flash (BiCS4) and the latest firmware tweaks. The results are rather impressive impressive!

The Plextor M9P Plus 1TB drive wasn’t the fastest in benchmarks like ATTO Disk Benchmark or CrystalDiskMark and we expected that to be the case. What we didn’t expect is that that M9P+ would be the fastest drive of the 16 SSDs tested on this system when it comes to PCMark 8 storage tests and game load times. The PCMark 8 Storage benchmark uses traces recorded from Adobe Creative Suite, Microsoft Office and a selection of popular games, so being the best on this test that uses storage activity from actual use of applications is important. Sure, we wish the sustained writes were a bit better, but the Plextor M9P Plus should deliver a solid user experience! 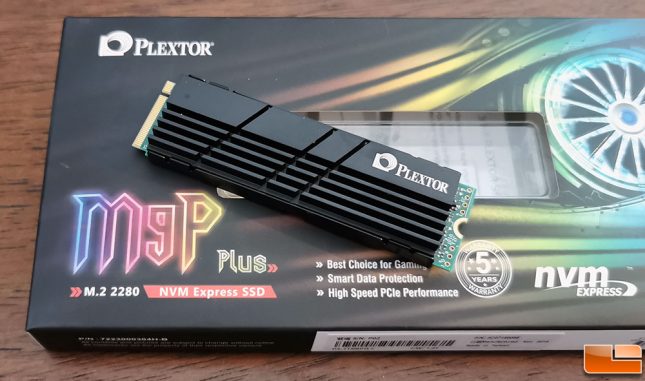 When it comes to pricing the Plextor M9P Plus 1TB capacity model (Plextor M9PG+) that we reviewed carries an MSRP of $134.99. That puts it at about At $0.13 per GB and that really isn’t bad for the performance that you are getting. If you wanted to save a few bucks the M8PGN+ comes sans heatsink for an MSRP of $129.99.

The Plextor M9P Plus series should be widely available to purchase here shortly as our friends our friends at Solid State Storage Technology USA Corporation, formerly Lite-On Digital Solutions USA, let us know these are coming to market in Q1 2020. If these drives are available at or below their MSRP when they become available we would easily recommend them to our readers.

Legit Bottom Line: The Plextor M9P Plus series takes a controller that has been around for a few years and pairs it with the latest BiCS4 NAND Flash. The result is a drive that performs exceptionally well in many real-world performance tests.