During CES 2020 the Plextor M9P Plus PCIe 3.0 x4 NVMe M.2 RGB SSD series was announced. These drives use the Marvell 88SS1092 ‘Eldora Plus’ 8-channel controller that has been paired with the latest BiCS4 96-layer TLC NAND Flash. The pairing creates a drive capable of reaching sequential speeds of up to 3,400 MB/s read and 2,200 MB/s write. With regards to Random 4K performance you are looking at up to 340,000 IOPS Read and 300,000 IOPS Write.

These performance numbers are not the highest out there, but Plextor believes they have a winner here for PC gamers and prosumers that are looking for the ultimate user experience. 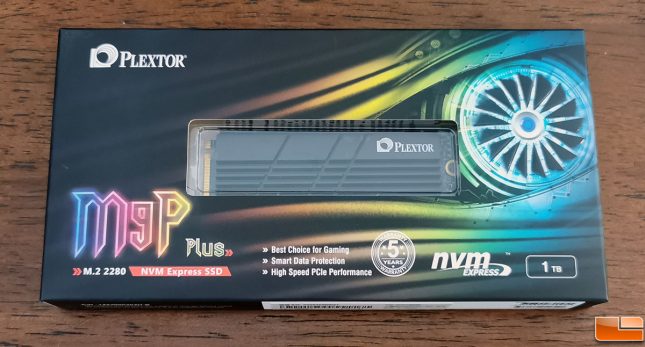 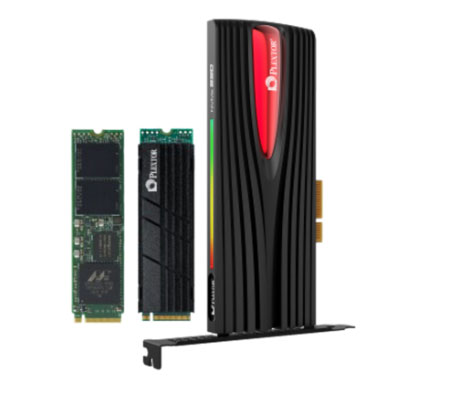 The lowest prices version of the M9P+ would be the M8PGN+ that comes in the M.2 form factor without any heatsink. For an extra $5-$6 you can move up to the M9PG+ M.2 form factor drive that comes with the heatsink. Those looking for a HHHL Add-in-Card (AIC) should look at the M9PY+ model series that costs an additional $10-$16.

All of the Plextor M9P+ series drives are backed by a 5-year warranty and have an endurance rating of 160 TBW for every 256GB of storage capacity. That means you are looking at 640 TBW for the 1TB model and that comes out to being about 350.6 GB drive writes per day over the course of five years.

The M9P Plus SSD Series features Plextor’s signature heatsink that is designed to keep the drive under 65C to keep it from ever throttle due to thermals and also improves the aesthetics.

Plextor uses the standard M.2 2280 ‘gum stick’ form factor, but we noticed that the heat spreader wraps around to the back. Clearly this drive is not aimed at laptop users due to the size of the heatsink, so laptop users will want to save a few bucks and get the M8PGN+ version of this drive without the heatsink.

When it comes to software for the Plextor M9P Plus you can download Plextool NVMe version 2.0.0 from May 2018 as it appears to still work. This gives you the drives general health, SMART details, the ability to secure erase and detailed drive information. You can’t update the firmware with this utility, but Plextor does release firmware updates via EXE files if they are needed. 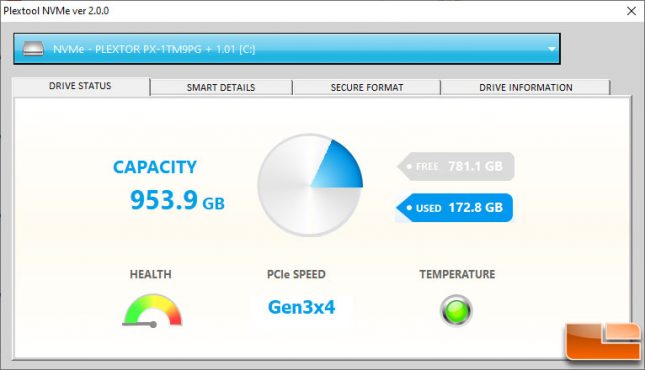