Before using the Discovery 655, we selected one of the many ways to charge this device.  Remember, you can use the included wall charger, or battery charger, or USB adapter if you are on the go.  We found that the wall charge is the best for fully charging a dead battery quickly.  The battery charger is great for those trying to maximize their talk and standby times between plugging in.  The USB charger was actually the slowest to charge a dead 655 battery, but again, for the on-the-go professional or student, this is a great feature. 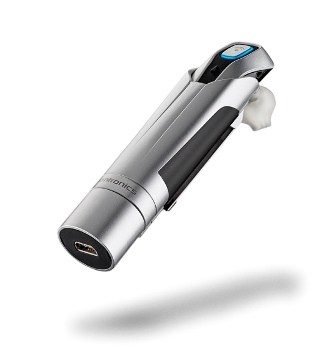 The first thing we noticed about wearing the Discovery 655 was that the ear gels were slightly different.  For our users, this translated to a more comfortable fit than the ?old? 640 gels.  Most of our users didn?t use the included ear loop since we found the fit to be snug enough not to come off.  For those who are not used to the in-the-ear fit, this might take some adjusting.

The Discovery 655, like its predecessor the 640 has only three buttons: Volume up, volume down, and a multi-function call control button. The call-control button is the largest and serves as the power switch, answering and ending phone calls, redial, switching calls from the headset to the phone (and vice-versa). 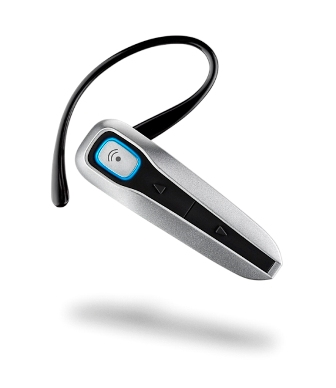 The one thing we noticed when wearing the Discovery 655 is that it takes a much stronger touch to activate the call-control button.  You get used to it after a while, but for a few days it was irritating to me because it was by far the ?stickiest? button I had ever used with a headset.

We paired the Discovery 655 with a number of different cellular phones.  From our now old standard, the Treo 650 and Motorola RAZR V3 to the newest phones in our arsenal: the Treo 700w and the T-Mobile MDA Vario.  All responded quite well and paired with little effort to our Discovery 655.

Incoming and outgoing calls transferred seamlessly and generally quickly to all four phones used. Range of use for the headset was also pretty consistent between phones.  I was able to use the headset around 40 feet (line-of-sight, indoor) with the Motorola and T-Mobile phones.  The Treos, while not as good, were able to function with the headset around 32 feet away ? not bad at all!  Of course your mileage may vary depending on the conditions of your workspace, but these are very good results for those that want to be cut free from cords and limited range headsets. 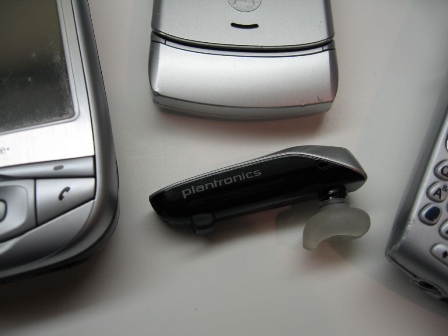 Battery life on a single charge was long enough for a day at work and school.  In fact after purposely chatting on the cell phone for the entire day and evening, I didn?t even get a low-battery warning for the headset.  My Treo?s battery was in the red before the Plantronics.

I really didn?t expect too much from the vibrating alert feature the Discovery 655 had for incoming calls, but it worked surprisingly well and was really handy.  I found myself leaving my phone in my backpack with the ringer off because I could still be alerted to my incoming phone calls discreetly.  Of course, it would be more discreet if I could turn off the police-like flashing light as well.  I know, I know, I?m being picky because the flashing light is actually a very good indicator as well to incoming phone calls.