As mentioned earlier, Plantronics is one of the few companies who realize the world is converging and the consumers who live in this world demand products that not only work well and perform, but require their products and electronics to be more than one dimensional. Here we have a bundle in the .AUIDIO 910 that Plantronics thinks is a perfect solution for those that want to use the headset for not only communicating on their mobile phones, but with popular VoIP applications such as Skype and MSN Talk.

Plantronics bundles the .AUDIO 910 with the Consumer Edition of PerSonoCall software that provides a link between the Voyager 510 Bluetooth headset and VoIP application software on the computer. Installation of the PerSonoCall software was very easy after requiring a reboot. The software only takes up around 7.5k worth of memory while running and doesnt bog down your system whatsoever. With the software installed, we plug the Bluetooth adapter in and it now becomes the new default audio device. Now when we run our favorite VoIP program, we are able to use the Voyager 510 as our headset. 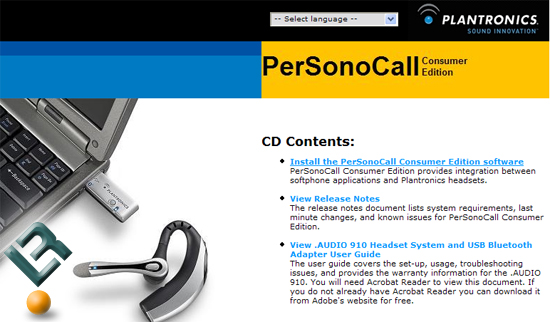 For our tests, we fired up Skype and called half-way around the world to the UK to see just how good this Plantronics package is. After the PerSonoCall software is initialized all the system sounds are transferred to the Voyager 510 headset so when Skype was started, the connection was instantaneous and without problem. 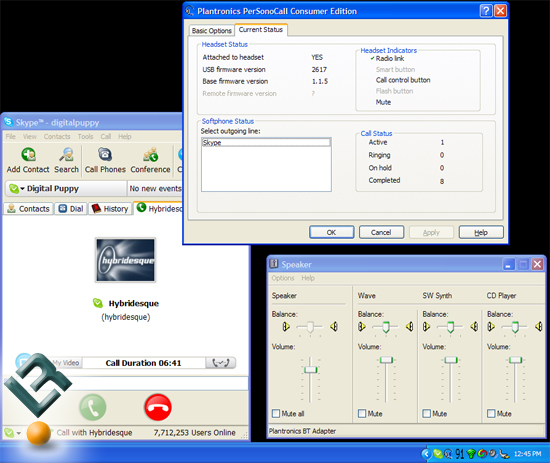 Sound quality during VoIP calls was surprisingly good. Even though this is a mono-type headset, the sound from the speaker was very clear when conversing. The Voyager 510 had plenty of volume to spare when holding a normal conversation. During our VoIP tests with different Skype users, most reported that the Plantronics combo wasnt as crisp as the last headset combo we tested the Qstik EVOQ but was still solid.

A cool thing that we experienced while using Skype was that we were able to hear music that was playing from websites and other sounds simultaneously while chatting. Again, this isnt hi-fi by any means, but it was enough to multitask and feel as though you arent missing out on anything going on. When a call came to the mobile phone the Voyager 510 was paired with, you could chose to answer that call and simultaneously put your VoIP call on hold. Pretty slick.