While 190MHz was the highest 100% stable overclock we were able to run several benchmarks at 194MHz with partial stability.  Anything over 195MHz and any attempts at increasing the processor voltage resulted in BSOD’s and failed post attempts.  Below is a screen shot of the highest we could get Super Pi to run on the Intel Pentium D 805.  Notice that CPU-Z is correctly showing the voltage being used as 1.376V as the voltage is at the default 1.4V in the BIOS. 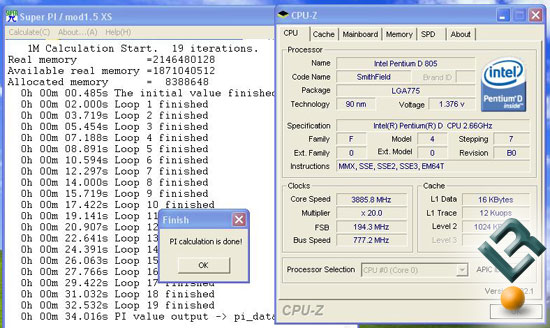 We were able to go out and purchase a $130 processor that has nearly all of the latest and greatest features from Intel and overclock it to run with the best that Intel has to offer.  This processor is ideal for budget systems and those looking for a cheap way to get a Vista ready platform for the next generation of Windows next year.  In terms of overclocking this processor couldn’t be any easier to overclock.  With no voltage increase required, all that needs really needs to be adjusted is the memory dividers and the Front Side Bus (FSB).  Since the Front Side Bus is running below 200MHz no voltage adjustments are needed on the chipsets and the PCI dividers are not being pushed out of tolerance.

If you are looking for an inexpensive way to get into a dual-core system and don’t mind overclocking then the Intel Pentium D Processor 805 should be high on the list.  The locked multiplier of 20 is the limiting factor when it comes to overclocking and performance, but for this price point I’m sure many will suffer. When it comes to pricing the overclocked Intel 805 processor performed just better than the Intel 840 processor. The Intel Pentium D 840 Processor can be found for ~$350 making this ~$130 processor a steal. With a price tag that is $220 lower than the 840 and better performance to boot, the Intel 805 is a no brainer for those looking for the ultimate in price versus performance!

We ordered our Intel Pentium D Processor 805 from ChiefValue.com for $130.99 last week and currently they are priced even lower at $129.79 shipped.  For the overclocker getting a 3.8GHz processor that needs no voltage adjustments for $129.79 shipped is nearly unheard of. To make things even better a high-end enthusiast motherboard is not needed for overclocking as running under 200MHz FSB is no big deal. Keep in mind that even when overclocked to 3.88GHz we were only running a FSB of 777MHz! Running a 200MHz FSB is default on many boards and nearly all of the newer Intel chipsets support a 266MHz FSB processor. An ECS 945P-A motherboard running the Intel 945P chipset is rated to run up to 1066MHz FSB and can be found for only $85 and will run the Intel 805 with no problems. For roughly $215 you can have a motherboard and a dual-core processor running ~3.8GHz with a little luck!

After using the Intel Pentium D Processor 805 for the week we found it a joy and an easy choice for all of those on a budget.  An editor’s choice is going out for this one!

In closing I’d like to thank you for reading this article and be sure to visit the forums and give us your take on the Intel Pentium D Processor 805!  I wonder if Intel will come out with a Pentium D 905 processor!?!?!

Legit Bottom Line: The Intel Pentium D Processor 805 is the lowest priced dual-core desktop processor on the market from either Intel or AMD and overclocks to become a great performing processor at a killer price.