Our retail processor came with a product code of BX80551PE2666FNSL8ZH and had a pack date of 02/23/2006.  Looking up sSpec code we found (Link) that the processor is designed to run at 1.25V-1.400V and is a B0 core stepping. We also found the product code for the OEM version of the Intel Pentium D Processor 805 – HH80551PE0672MN. Doing a couple searches on Froogle and Shopping.com we had no luck finding any OEM versions for sale, but a Google search found two companies in Russia that listed the 805 on their product pages.  If an OEM version comes out the pricing would more than likely be even lower than the $130 product we have here today.

Looking at the 805 processor itself we find the usual markings found on retail processors.  No Engineering Sample (ES) processor for this review.  Currently there are two Intel 805 reviews on the internet and both were done using Intel ES processors making this the first online article done by a review site of the retail version (that we know of).   Looking at the last line of code we believe that this processor was made during the 50th week of 2005 in Malaysia. 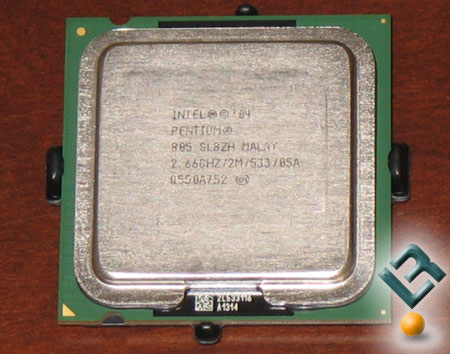 Using CPU-Z 1.32.1 our Intel Pentium D Processor 805 was able to plug-in-play in our ASUS P5WD2 Premium motherboard.  A quick look at CPU-Z showed that everything was up and running at the correct speeds and voltages. 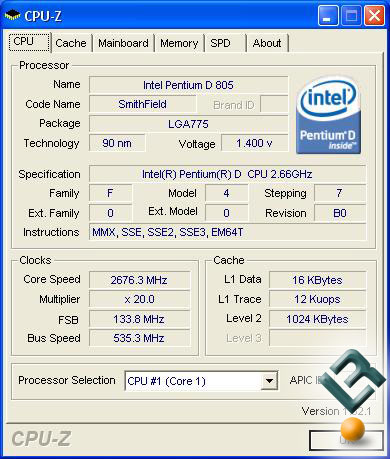 The Smithfield core is basically two Prescott processors bolted together and does tend to get warm. We highly suggest using water cooling and when using our Corsair Nautilus 500 water cooler temperatures were not a concern.
Now let’s take a look at some general benchmarks at default and start the overclocking!