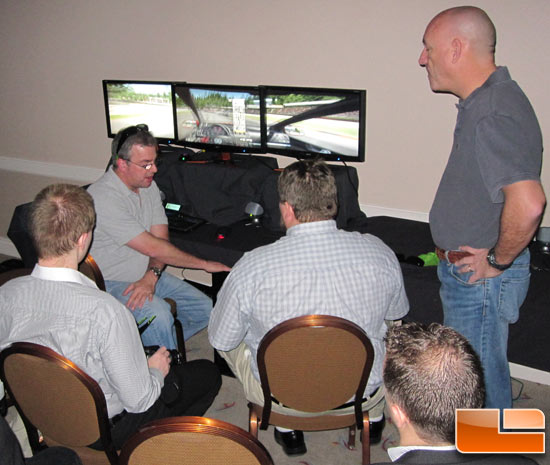 NVIDIA 3D Vision Surround uses up to 746 million pixels per second of rendering horsepower, or 3x greater than last generations extreme gaming setup. With tessellation, compute shaders, and PhysX enabled, the demand on the GPU is tremendous. GF100 is architected to enable the highest performance on NVIDIA 3D Vision Surround. GF100s new ROP subsystem has twice as many ROP units per partition, allowing multiple displays to be fed concurrently. Its parallel tessellation and raster engines enable sustained performance in heavily tessellated scenes. And its powerful compute architecture with fast context switching makes compute operations as lightweight as possible.

NVIDIA 3D Vision Surround includes controls that allow for the adjustment of the displays to compensate for monitor bezel gaps, allowing for a more realistic viewing of full-screen games. With bezel correction, part of the game view is hidden behind the display bezel so that the bezel appears to be part of the game. This produces a more continuous image across the displays and provides a more realistic experience. It is similar to looking through a cockpit window where the window frames block your view.

Dark Void is an upcoming video game being developed by Airtight Games and published by Capcom. NVIDIA spent a year working with the developers to place killer PhysX effects into the game and this video highlights what those elements look like using an upcoming GF100 Fermi Video Card. Sorry for the bad video and lighting as this was taken at a conference from a point and shoot camera.