Here is a chart comparing all the DDR500 memory we have tested thus far. We broke it into two columns so it fits on a normal web page. Mushkin memory is highlighted in blue on the right of each data table. 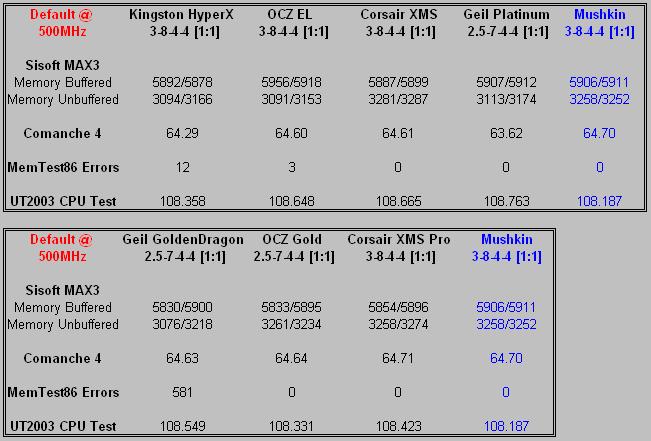 Results: We found no errors in memtest86, which should be a must for any memory that is sold to end users. At default timings all the memory modules seem to be very similar. We ran testing at tight timings and overclocked at default timings, but the data is very similar to what we saw on our 6-Way DDR500 round-up and it does not show a significant difference so it was not shown.

Since the Mushkin PC4000 memory tested out so nicely we went the extra step and tried some new testing methods to see if we can find a clear winner between the Mushkin PC4000 and our past DDR 500 Editor’s Choice winners! One of the most important tests other than stability testing is to run some indepth bandwidth testing at various timings. We used unbuffered memory testing since it is a more realistic test.

The memory speed (MHz) on your computer is never constant so to counter this we ran Sandra memory bandwidth testing ten times. This was done since we observed that the memory clock speed varies by 10MHz DDR! This fluctuation can cause serious testing variation and this is the reason a single bandwidth score is 100% useless and means nothing. After running Sandra ten times we added up all the integer/float scores and found the average. We feel this gives an accurate picture how the memory is performing. Below are the results! 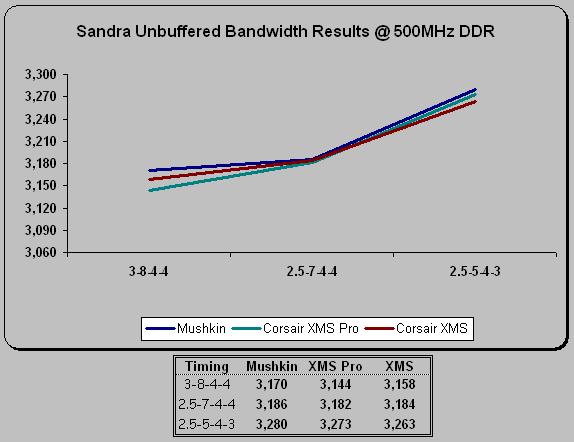 This should be fairly accurate because both Mushkin and Corsair use Revision B Hynix IC’s and seem to have a very similar PCB construction. Corsair was able to tell us who manufactures their PCB’s, but Mushkin was unable to provide us with any information other than they were made in China. If I had to make a bet on it I’d say the PCB’s are made by the same companies and differ only by their trace routes and some other small tricks.

Mushkin has been operating its memory and components e-commerce site since 1994 and it is not hard to see how they have made it this far! We can clearly see that their DDR500 memory modules are some of the best on the market after looking at the majority of 512mb modules sold in North America.

After comparing Mushkin’s DDR500 modules head to head with Corsair’s DDR500 XMS modules we can see that both are on the same level when it comes to performance. Which brand is better? It honestly all comes down to brand loyality, customer service, and of course price point.

The Corsair XMS 4000PRO and Corsair XMS 4000 received our editor’s choice award on previous DDR500 memory reviews. Since Mushkin’s DDR500 is performing equally to the Corsair XMS modules and the fact that we found no memory errors on RSTPro or Memtest86 testing we feel that Mushkin deserves to be on the short list also. They laid out their trace routes very well and picked the correct Hynix IC’s to come out with a winner for end user!

If this line of memory does not suit your needs check to see if Mushkin has any memory for your individual needs!