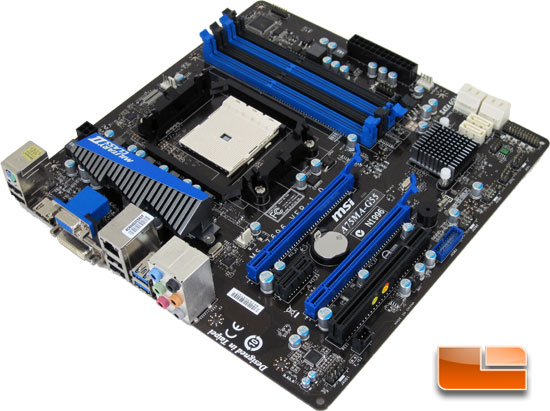 The MSI A75MA-G55 APU motherboard is built using the same Military Class II high quality components that we have been finding on the recent MSI Motherboards that we have looked at. The Military Class II technology features Hi-c capacitors, Super Ferrite Chokes, and Solid Capacitors. The Hi-c Caps (highly conductive capacitors) have a life expectancy eight times that of a Solid Capacitor and have a higher thermal stability. The core of the Hi-c Capacitors features a Tantalum Core which is a rare and highly stable material. Also making up the Military Class II components are Super Ferrite Chokes (SFC). The SFC’s use a Ferrite core that is Super-Permeable. This allows the Super Ferrite Chokes to run at a 35 degree Celsius lower temperature, have a 30% higher current capacity, which is a 10% improvement in power efficiency and better overclocking power stability. The last component of the Military Class II is Solid Caps (Solid Capacitors). The solid capacitors have an ultra long lifetime in excess of 10 years. Advantages of the solid capacitors include no explosions, low ESR and a lower temperature!

The MSI A75MA-G55 has a lot of features packed into a micro ATX platform. One of the features from MSI that I have always enjoyed is the OC Genie II. The OC Genie II is an extremely easy way to make an already fast system that much faster. Auto overclocking with the OC Genie II isn’t going to break any world record overclocks, but it’s not meant to. It’s designed to give a rock solid boost to your system with minimal effort on your part. Every time that I have used it across the various MSI motherboards we have looked at, it has done exactly that.

Aside from the Military Class II components and the OC Genie II, the MSI A75MA-G55 still has a number of features worth mentioning. Among these is Winki 3. Winki 3 is a free Linux based operating system that boots up in as little as 25 seconds. Once inside Winki 3 you will have internet access for e-mail, instant messaging and just about anything else online. We also have features like Click BIOS, i-Charger for intelligent charging of your smart phone/tablet, M-Flash, AMD Dual Graphics and, of course, AMD CrossfireX.

The MSI A75MA-G55 surely has a lot to offer for a board that retails for as little as $101.76! Join us on the next page where we will take a look at the retail packaging and bundle for the MSI A75MA-G55, followed by the layout and the MSI Click BIOS.