Logitech packages the G603 LightSpeed Wireless gaming mouse in a grey box with blue foiled “G603” text running vertically next to a top angled graphic of the mouse. The graphic of the mouse and blue foil “G603” stand out nicely from the matte grey background. The G603 LightSpeed wireless box follows a professional aesthetic, lacking crazy fonts or logos to try and attract gamers, but instead focusing on the mouse itself. 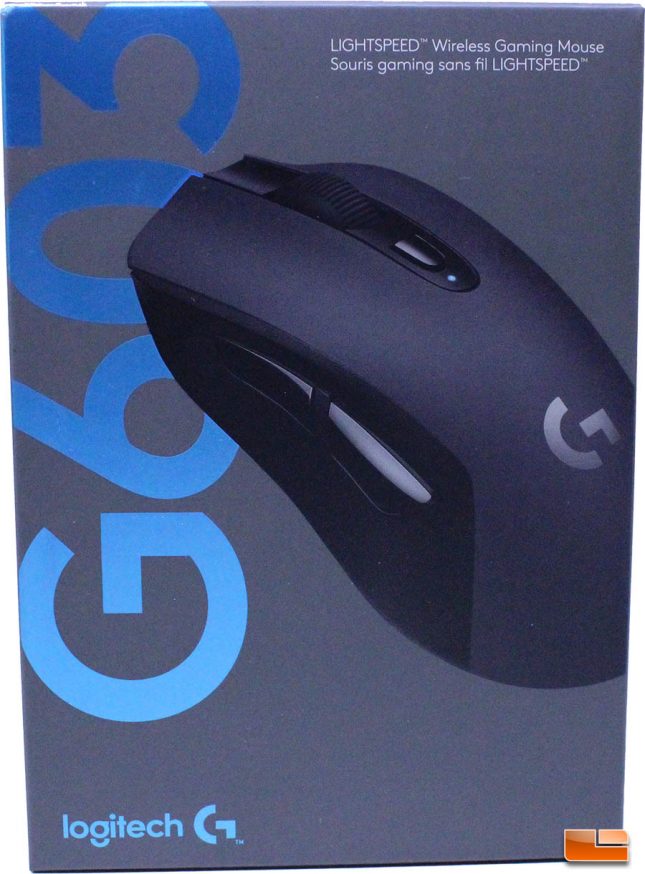 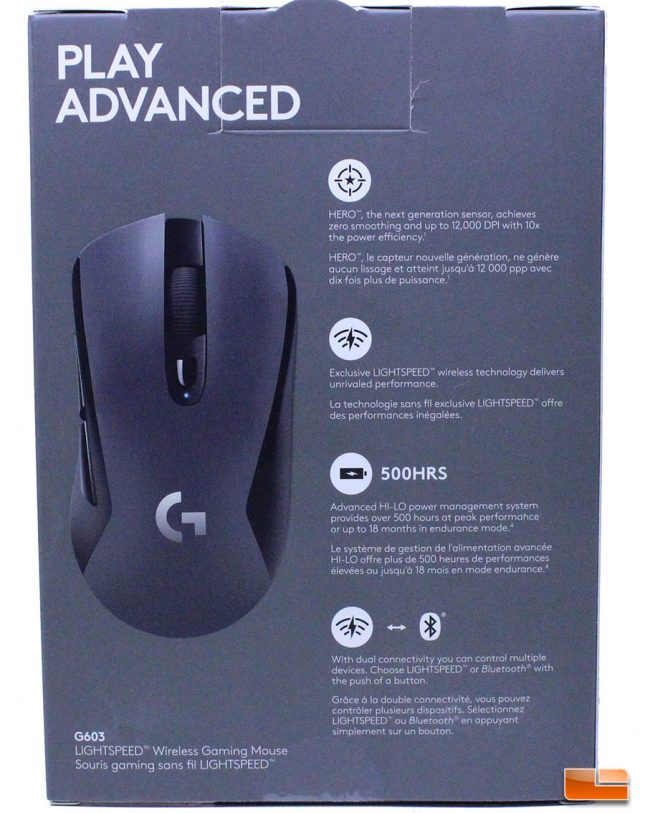 The Hero Sensor, LightSpeed support, 500 hours of battery life and the Bluetooth support that allows the G603 to be used with more than one PC with the press of a button, are all explained on the rear of the G603 LightSpeed Wireless box. Logitech did a great job of listing the features in a clear fashion that a customer picking up the mouse off the shelf will find easy to understand without being overwhelmed. After looking at and reading the packaging for the G603 LightSpeed Wireless, you would expect it to be a no-nonsense, high quality gaming mouse with excellent battery life and solid wireless performance, which is exactly how Logitech is marketing this mouse. 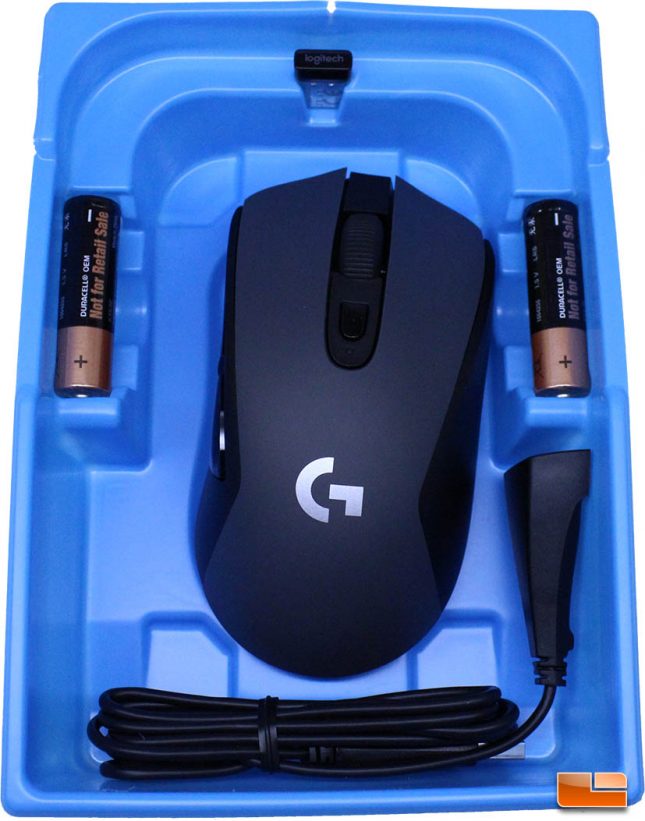 Logitech packages the G603 LightSpeed into a two piece clamshell within the outer box, with the USB extension cable, LightSpeed USB Nano receiver and 2x AA batteries all set into specially tooled sections of the lower clamshell. The upper clamshell has been removed in this picture so that the included components can be seen more clearly. Even though the presentation isn’t anything to write home about, Logitech does a good job of properly packaging the G603 LightSpeed and accompanying accessories to protect them from damage and they can be easily accessed by customers when they first open the box. 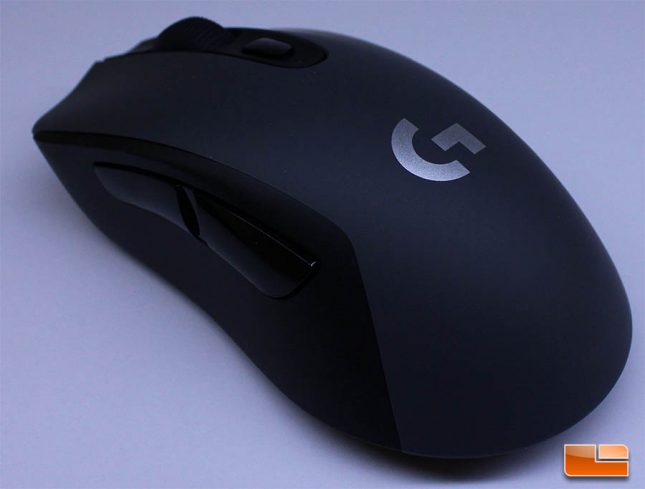 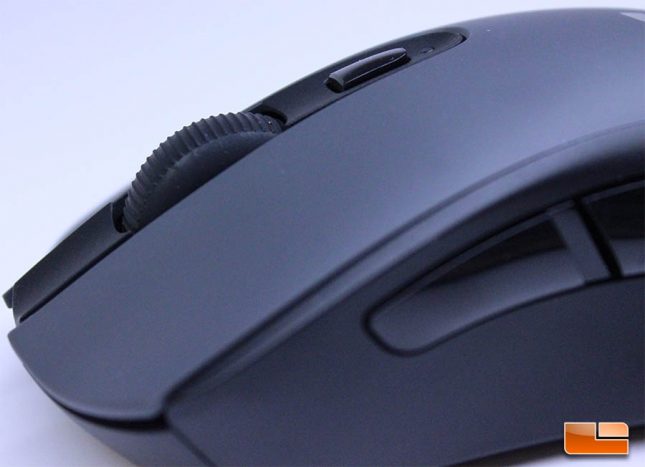 The side button area of the G603 LightSpeed has a plastic grip area that is comfortable to hold and I didn’t have any issues with the mouse slipping, though the plastic material of the G603 doesn’t provide the solid, reassuring grip of the rubberized texture found on the G703 LightSpeed. Given the cost difference and weight considerations of the G603 LightSpeed, I’d say the use of plastic grips instead of the rubberized ones found in the more expensive mice is a fair trade off and one that doesn’t take away much from the experience in day to day use. 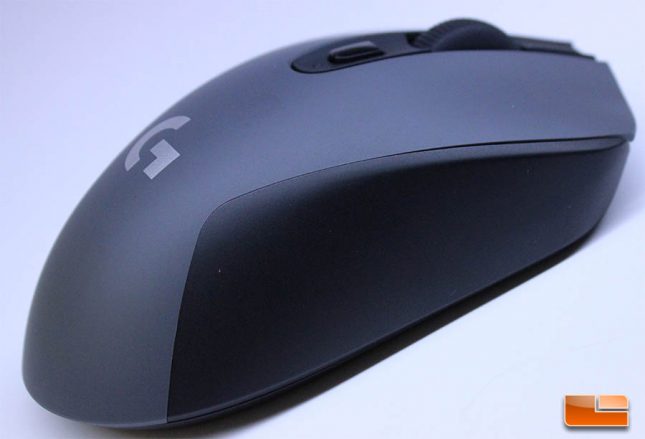 The G603 LightSpeed weighs in at 112.3 grams with a single AA battery installed, or 135.7 grams with two AA batteries installed. While not in the realm of competitive gaming mice like the Logitech G Pro (83G), the Logitech G603 Wireless weighs just 89 grams on its own, so the AA batteries are really making up a lot of the bulk here, adding about 23-25 grams of weight, each. Since the G603 LightSpeed doesn’t offer better performance with two AA batteries installed, only longer battery life, it may make sense for many users to run just a single AA battery for the weight savings. The Razer DeathAdder Elite, an extremely popular wired gaming mouse with a similar form to the G603, weighs in at 105 grams, so the weight factor of the G603 LightSpeed with a single battery installed is pretty impressive. 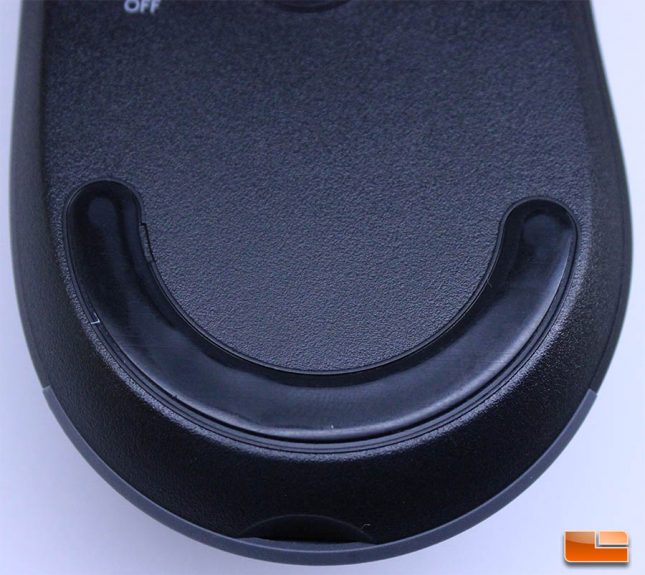 Removing the top cover of the G603 LightSpeed is really simple. On the bottom rear of the mouse, there is a little area specifically for your finger to easily pop up the cover. 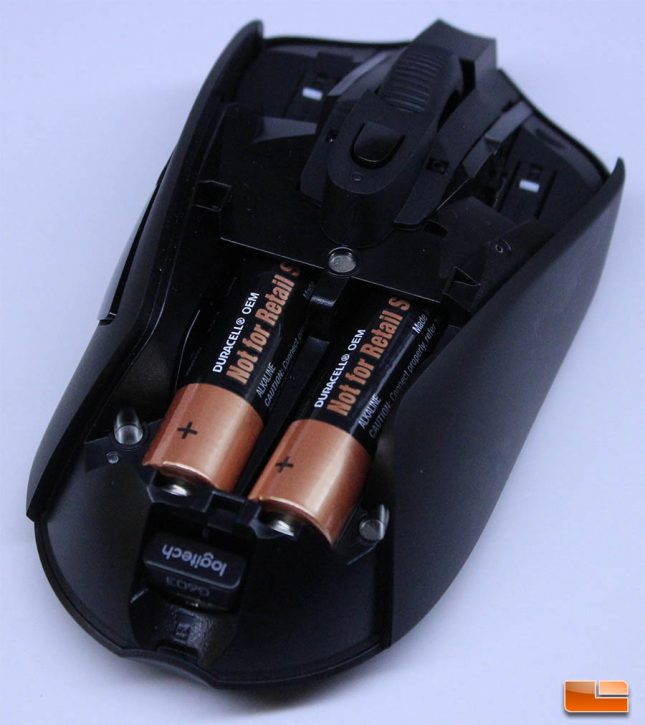 Underneath the plastic top of the G603 is the battery compartment and a holder for the LightSpeed wireless transmitter, which is unique to the G603 mouse that it ships with. This is a very well thought out design from Logitech, with the batteries able to be easily installed and removed, while giving the user an easy to access location for their LightSpeed transmitter, so that they can take their mouse with them and not have to worry about losing the proprietary transmitter. 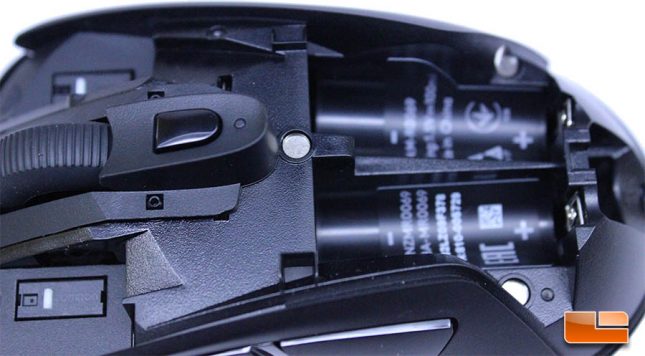 The plastic top of the G603 LightSpeed is held on with nicely spaced out magnets and fits very securely, with no issues of it rattling or slipping when in use. Logitech has done a great job of keeping everything really clean and tight with the manufacturing here, as all of the lines are perfect and the top fits perfectly with the base of the mouse. 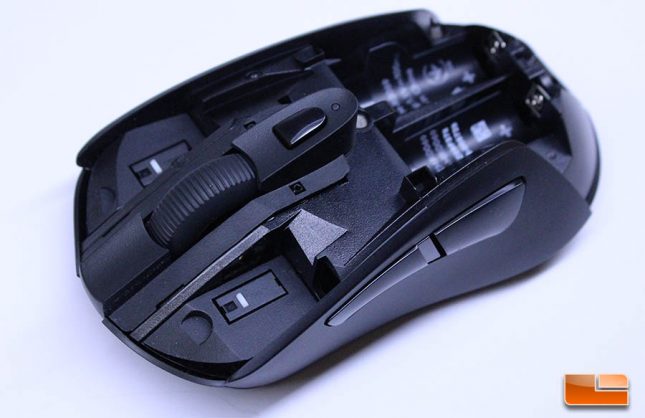 With the top cover of the G603 LightSpeed removed, we can also get a good look at the Omron main button switches. These switches, tested by Omron to last for 20 Million clicks, offer a very satisfying, crisp response and have been used in various Logitech G series mice, including the original G403.

Due to the G603 having a single body design, rather than independent buttons, I thought the clicks wouldn’t be quite as consistent as they are on the G703, but the difference is only very slight in the favor of the G703; the buttons on the G603 LightSpeed offer satisfying, responsive, consistent clicks nearly on par with those offered by the more expensive G703 LightSpeed. 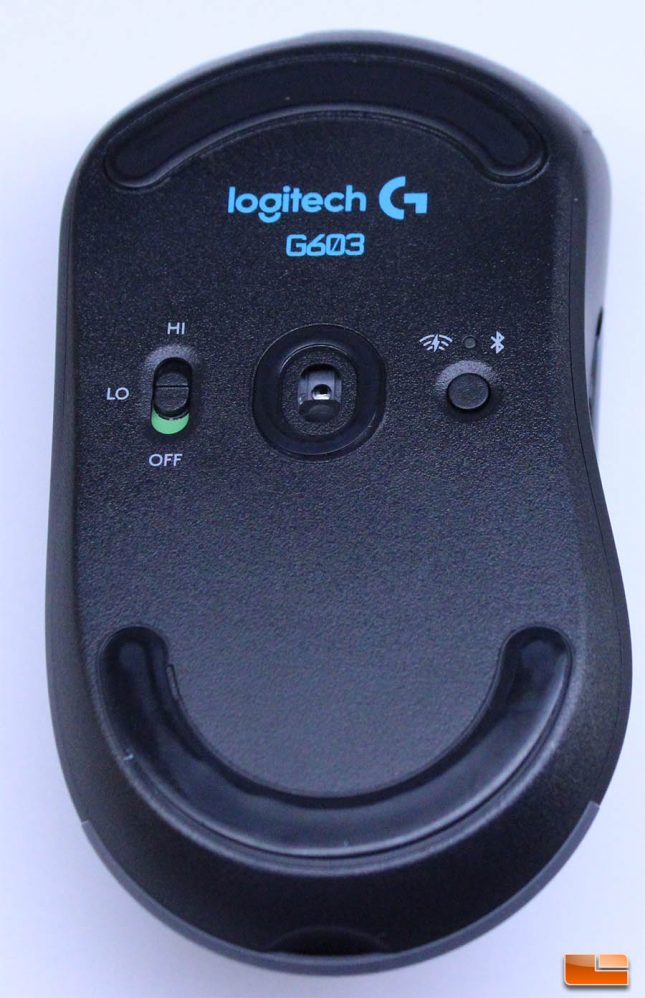 The feet on the bottom of the G603 LightSpeed have excellent coverage, curving around the top and bottom area of the mouse on both ends. These are the same excellent mouse PTFE Teflon mouse feet that you will find on the G403 Wireless and G703 LightSpeed, allowing for excellent gliding and control on either cloth or hard surface mouse pads. In my experience, these mouse feet hold up well on cloth mouse pads, with my G403 Wireless showing minimal, normal signs of wear after about a year of use. Given the popularity of the G403 Wireless/G703 LightSpeed mice, aftermarket mouse feet using a specially treated PTFE Teflon that is much slicker than stock and designed for competitive use are available from Hotline Games. 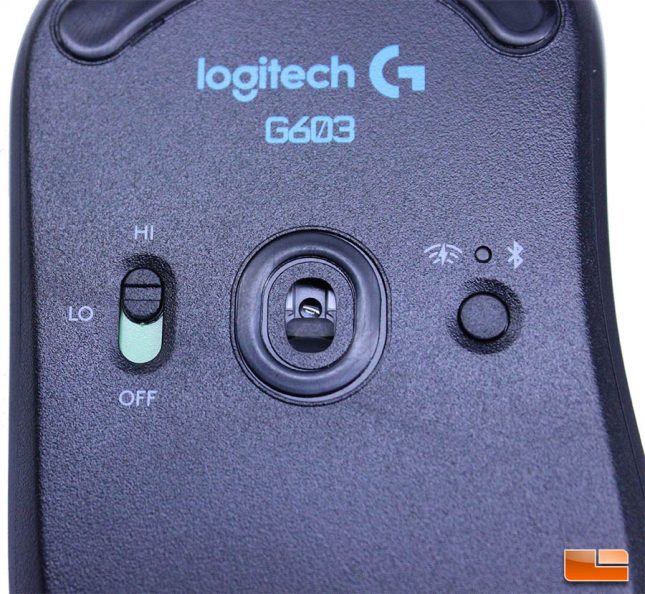 Let’s take a look at the G613 LightSpeed Wireless Mechanical Keyboard, next.