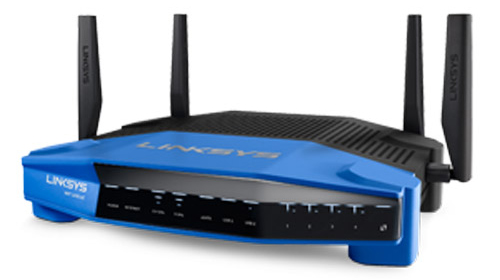 We were very interested to see the real-world wireless speed performance of the Linksys WRT1900AC so we approached our speed tests like we have done in the past. We connected the Linksys WRT1900AC to our desktop PC running Windows 8.1 Pro 64-bit and configured the router using Automatic settings for both 2.4Ghz and 5Ghz bands. We then took our Alienware M17XR4 to use as a target laptop client. The Alienware has served us well in the past as a machine which is a workhorse and doesnt skimp on features. The Alienware M17XR4 contains an Intel i7-3610QM CPU with 6GB RAM running Windows 7 64-Bit, and a NVIDIA GeForce GTX 660M video card. For our tests, we bypassed the Qualcomm Antheros Killer Wireless-N 1103 Network Adapter and connected a Netgear R6300 Dual Band Wi-Fi router in Bridge Mode. The R6300 has been our Go-To router/bridge for a while and produces some of the fastest wireless-AC connection speeds that weve seen. We took our Alienware/Netgear Bridge and didnt tell the client anything more than the SSID name for each router tested and let it automatically choose the best channel to connect to. For the fastest possible data throughput, the routers were set to Unsecure Mode and with WMM turned ON. After connecting, we ran the application LAN Speed Test (LST) to measure file transfer and network speeds. LST builds a file in memory and then transfers the packet without the effects of windows file caching. It then reports the time and calculates the network speed. 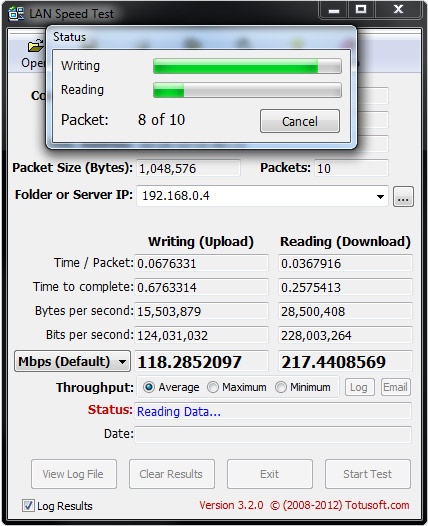 We repeated the test 2 more times rotating the router 90 degrees after each test to make sure that the routers speed was affected adversely by its orientation. We took speed measurements at three different locations of the Legit Bunker: In the Same Room about 5 feet away from the router; in a 2nd Room about 20 feet away from the router through a door; and in a Far Room, one level below where the router sat. Doing this should really give us a nice taste of how our routers perform in the real-world. 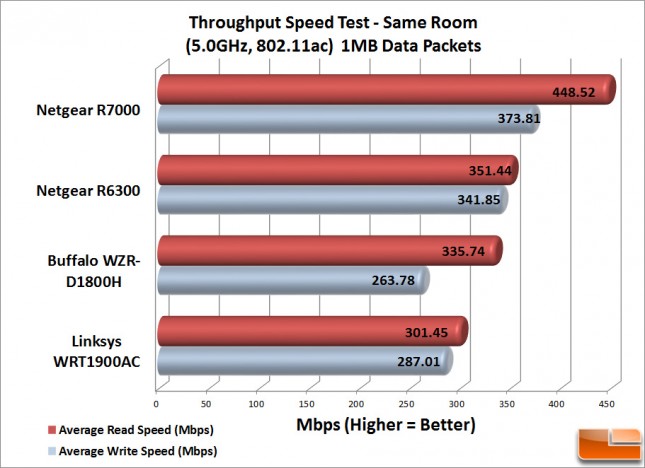 Benchmark Results: Our first benchmark is done with packet sizes of 1MB and we see an adequate result from the Linksys WT1900AC in the first of the three rooms that we tested. We did note that overall speeds did increase after upgrading firmware versions (to Version 1.1.8.161917). This is most likely due to an optimization of the Beamforming techniques that Belkin/Linksys have implemented in the WRT1900AC. The Linksys does trail the Netgear R7000 by a significant margin, however as it performs the worst in the throughput test that should show some of the highest speeds. Overall, these numbers are solid not spectacular when looking at what this router can achieve in regards to its throughput speed. 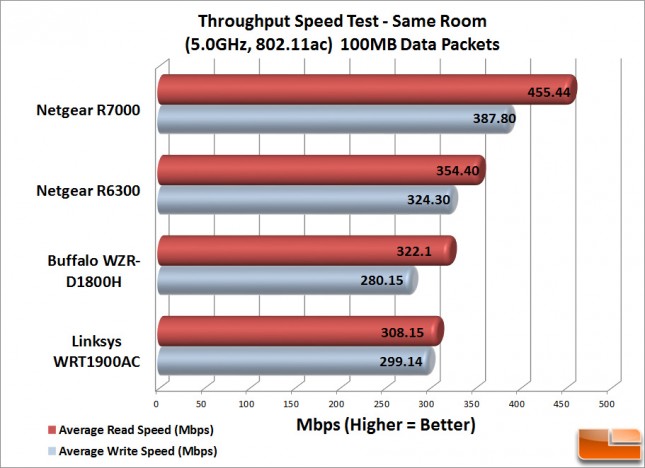 Benchmark Results: When we look at the throughput speeds for wireless routers, we always pay particular attention to the 100MB data packets as this test is a great representation of what behavior you will encounter when transferring large files or streaming multimedia. Here the Netgear R7000 again dominates our measured results. We do notice a slight improvement of throughput speeds for the Linksys WRT1900AC, but again, nothing to jump up and down about. These kinds of speeds will give you high-definition video streaming with no buffering or dropped frames. Our concern is if you have a high volume of traffic, or multiple sources using the routers resources, will these speeds be sufficient. 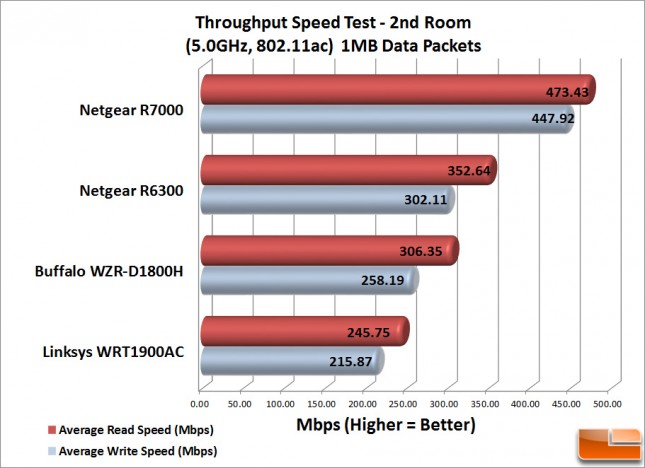 Benchmark Results: When we move to the second room, around 20 feet away and through a wooden door, we see that each of our AC-routers have a slight drop in speeds in both their Read and Write throughput. The Linksys WRT1900AC falls off to just under 250Mbps in its Average Read Speeds. We again see the Netgear R7000 leading the way when it comes to pure speed. 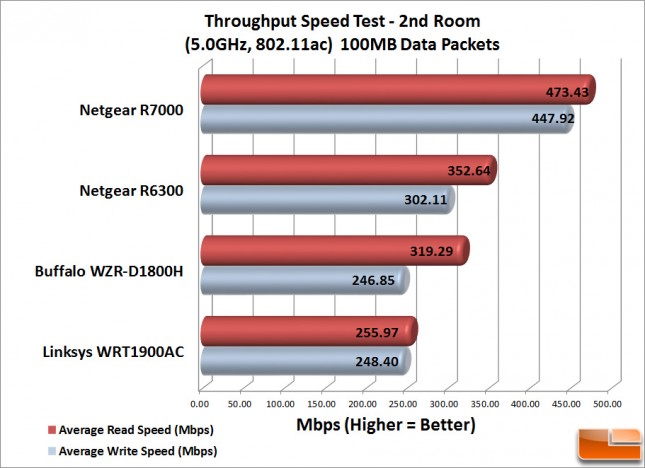 Benchmark Results: One of the things we notice when looking at the larger packet sizes is that the Linksys WRT1900AC does improve slightly with larger data. The Linksys speeds still are not up to what is happening with Netgear R7000 or even the older generation R6300. 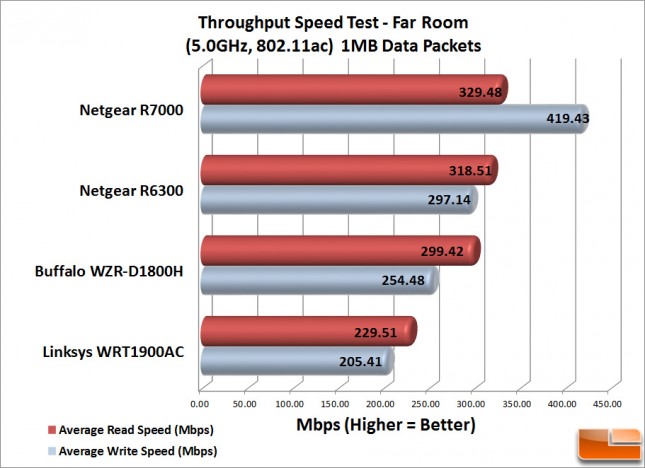 Benchmark Results: Moving to the farthest room away from our test bench, we see a tremendous amount of signal change in all of our 5GHz AC-wireless routers. For the most part, the order of results are consistent with the Netgear R7000 leading the pack and Linksys WRT1900AC bringing up the rear behind the Buffalo WZR-D1800H and 1st generation AC-Wireless Netgear R6300. 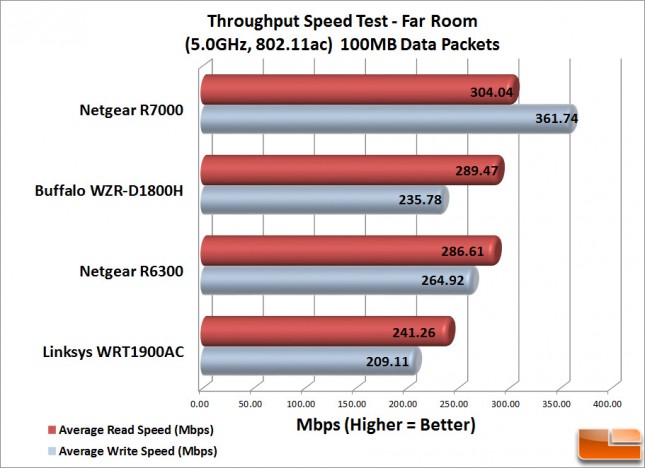 Benchmark Results: With the larger packet size the Linksys RT1900AC still gives us a useful signal that will allow a user to successfully stream High-Definition media content over a fairly long distance.