We then moved our laptop and wireless bridge down stairs to the far corner of the house. The run was more than 40 feet across and through a carpeted floor. We again ran LAN Speed Test (LST) with data packet sizes of 1MB and 100MB. LST again gave us measurements of Average Read and Write speeds which are plotted below. 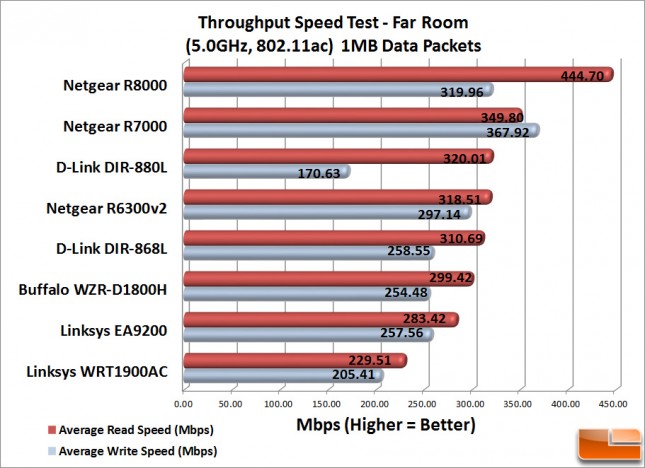 Benchmark Results: Moving to the farthest room in the Legit Bunker, we see Average Read Speeds of the Linksys EA9200 are 283 mbps which is 56% slower than our speed-leading Netgear R8000. These results are a bit more troublesome for the Linksys EA9200 since this measurement represents a significant drop in throughput while most are looking for routers with the greatest speeds at distance. 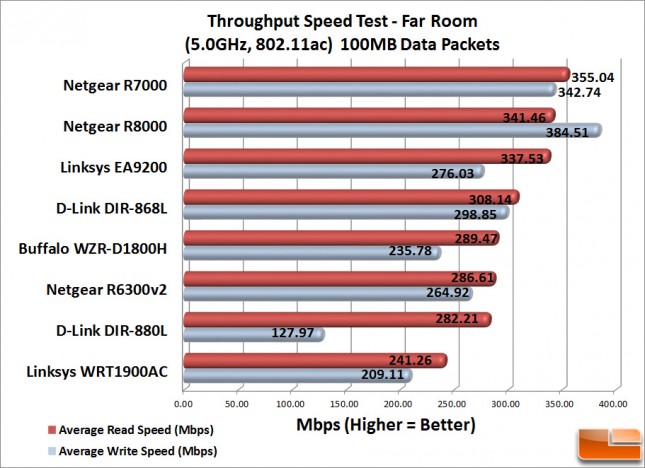 Benchmark Results: This test shows the Linksys EA9200 performing near the top of the class with Average Read Speeds of 337 mbps for larger data packets. Any concern that we had after looking at the Linksys EA9200 results for the smaller data packet sizes erased when we evaluate the larger packets. The EA9200 really holds its own against the Netgear R7000 and R8000. The Average Write Speed of the EA9200 is still in the middle of the pack, but the results are still solid.