Let’s see how real-world was when writing a movie folder containing seven 1080P movies over to the SSD. For this test, we are going to simply stress write performance by transferring over a 30.6GB folder of movies off of a PCIe NVMe SSD to the drive being tested to see how performance looks. This test is one of our favorites as it really taxes a drive with a long sustained write operation that usually fills the cache of the drive. Many people move around large database files, data backups or movie folders, so we think this test really shows the true performance of a drive. 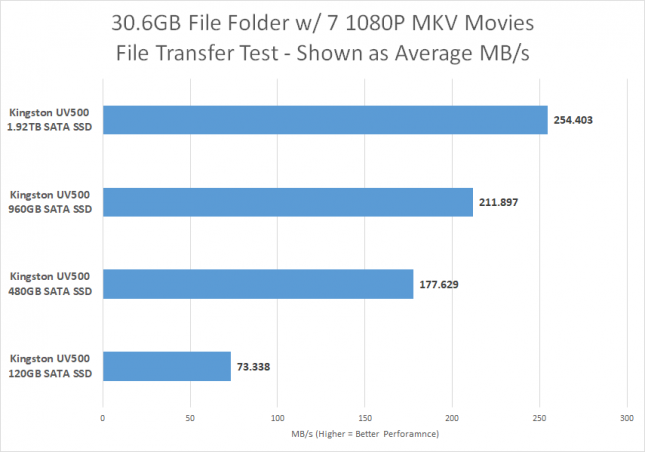 The Kingston UV500 series is aimed at business users and while most of the synthetic benchmarks didn’t show huge performance differences between the higher capacity UV500 series drives, that does not hold true here. This test filled each of the drives SLC cache and thus the data was slowly written to the 3D TLC NAND cache. The Kingston UV500 120GB finished the file transfer with an average  speed of 73.3 MB/s. The UV500 480GB finished with an average of 177.6 MB/s, which is nearly 2.5x faster than its smaller 120GB sibling. The 960GB drive reached 211.9 MB/s and the largest 1.92TB drive finished with an average of 254.4 MB/s. 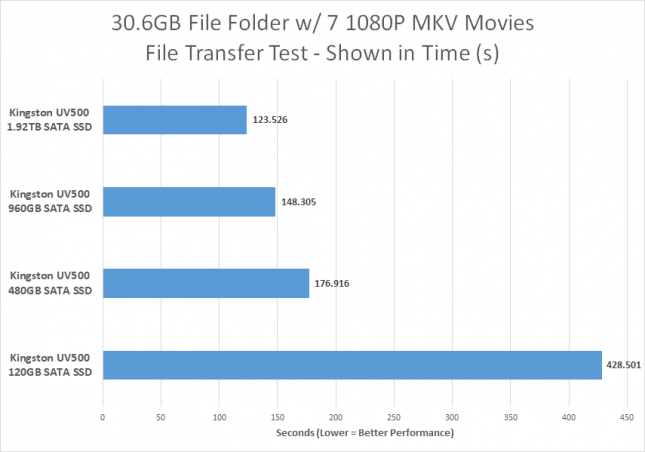 Another way to look at this test is the total time that it took to complete the folder transfer. The UV500 120GB took over seven minutes to move the ~30GB folder whereas the the UV500 480GB drive took just under 3 minutes and the UV500 1.92TB drive finished in a touch over 2 minutes.

Buying a larger capacity drive will give you a larger SLC cache and drastically change the performance you get when moving around large amounts of data! Legit Reviews asked Kingston to divulge the amount of SLC cache on each of the Kingston UV500 series drives and they were happy to oblige.

Kingston did not make the SLC cache linear on this series as the UV500 960GB and 1.92TB drives have more cache available per the size of the drive than the three smaller capacities. We would think that our test file would easily fit in the SLC cache of the UV500 1.92TB drive and not have any performance slow downs, but that is not the case here for some reason. If you are a heavy user that often deals with big data files we suggest picking the drive with the cache that best fits your needs and budget.