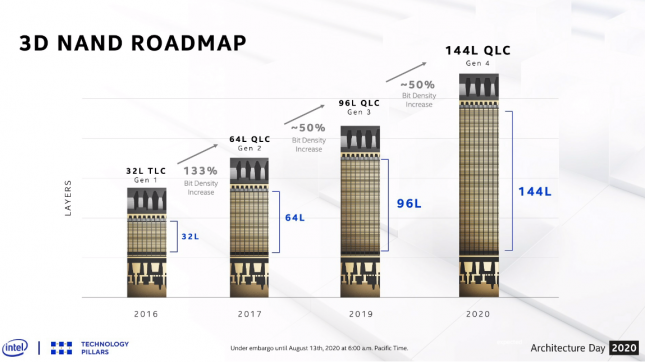 Intel does mode than just NAND Flash though as back in 2015, Intel introduced a new memory technology called 3D XPoint (pronounced crosspoint). This new media sits between DRAM and 3D NAND. It has characteristics of both, but at the memory cell level, it is completely different. Intel showed the slide below to visually show the different cell architectures side-by-side. They clearly each have very distinct characteristics.

On the very next slide, Intel used side-by-side images again, but this time they were drawn to relative scale with one another. That DRAM cell in the white circle is what is required and necessary to hold a single bit of memory. So, the circle is much smaller on 3D XPoint than DRAM and smaller again for 3D NAND, which thanks to QLC technology can hold up to four bits in that same circuit. Yes, DRAM is actually, that big and Intel says this is a prime example of why memory for capacity will continue to be limited. 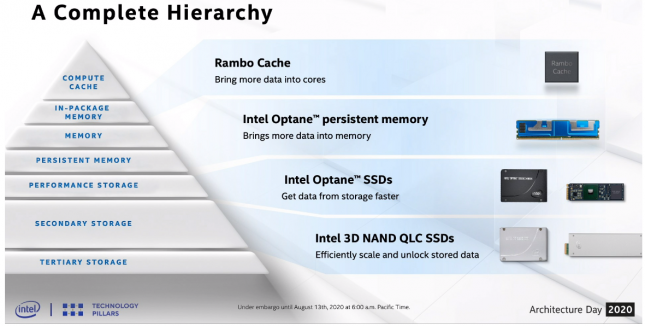 The other big news from the Intel Storage team was on Intel Optane. Intel launched the first Optane drives in 2017 and they learned a good deal by launching the 1st generation Optane SSDs. Intel is currently working on the 2nd Generation Optane SSDs and have confirmed that they will be using the PCIe Gen 4.0 interface.

Intel has set a goal to exceed a performance gain that is more than double the original! 1st Generation Intel Optane memory used a 2-deck design in 2020 and for 2020 the 2nd Generation Optane memory will have a 4-deck design. So, Intel has also doubled the density for Optane and that will allow for larger capacity drives and hopefully lower price points. That is great news and we can’t wait to see some consumer PCIe Gen 4.0 drives in the Intel Optane SSD series!

Intel has confirmed that they will support PCIe Gen4 on Intel Tiger Lake processors along with integrated Thunderbolt 4 and USB4 support!