When the Intel Optane SSD DC P4800X was announced in March 2017 we were impressed with the crazy fast performance numbers Intel was able to get on their very first Intel 3D XPoint Optane SSD. The Intel Optane SSD DC P4800X 375GB drive boasts sequential transfer speeds of up to 2400MB/s Read and 2000MB/s Write. Impressive, but so is the Random 4K performance numbers of 550,000 IOPS Read IOPS and 500,000 IOPS Write! The raw speeds are impressive, but you have to keep in mind that this is a datacenter-oriented part that costs $1,520 or $4.05 per GB. 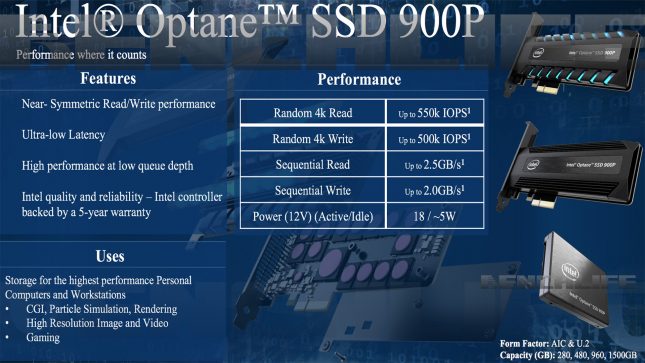 We have no idea what pricing or when these drives will be hitting the streets, but we are fairly certain that they won’t be priced over $4 per GB. The leaked slide shows the Intel Optane SSD 900P will be available in 280GB, 480GB, 960GB and 1500GB capacities. Hopefully we’ll learn more about this drive this quarter as rumors have been floating around since March 2017!