We are going to be doing something different for overclocking this time around. We overclocked the Intel Core i9-9900K on two motherboards. The first is the ASUS ROG STRIX Z370-F Gaming, which your average ‘mainstream’ $200 gaming board that is available for around $200. This board was designed long before the 9900K was sampled and while the 9900K is supported on this particular board we were not advised to overclock on it. Well, the advice that we got from ASUS went in one ear and right out the other and we overclocked the 9900K on that board. To overclock the 9900K we kept it simple and just raised up the CPU multiplier as far as we could get it with stability with all CPU cores sync’d. 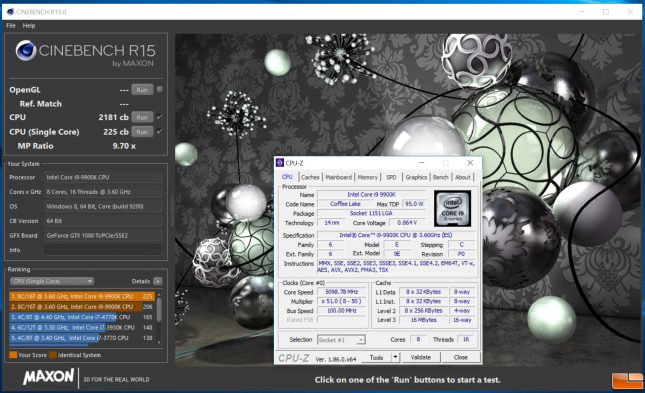 Much to our surprise we managed to hit 5.1GHz on all cores on the ASUS ROG STRIX Z370-F Gaming. We were ripping off benchmarks like Cinebench like a champ. Scores were right around 2180 for the multi-CPU test and 225 for the single-CPU test. We did notice that the 4-phase CPU power design on this board was hating this overclock those as we were starting to get choke whine and just moving the mouse around the desktop would change the pitch of the noise.

We fired up HWiNFO64 and noted that the CPU power was right around 99 Watts and the CPU current was 88 Amps with all stock settings. By just bumping up the multiplier the CPU power shot up to nearly 220 Watts and the CPU current was at 149 Amps. No wonder the power design on this mainstream platform was literally screaming for mercy. Then again the ASUS STRIX Z370-G Gaming and Z370-F Gaming motherboards aren’t winning awards for their power design.

Next up we switched over to the ASUS ROG MAXIMUS XI HERO (WI-FI) motherboard that retails at $339 shipped and is aimed at enthusiasts that overclock. This board has a twin 8-phase power design and we were able to get it up to 5.0 GHz on all cores with full stability. We weren’t getting any crazy noises when moving the mouse around on this Z390 board, but we were a little shocked it wouldn’t run at 5.1 GHz by simply moving the multiplier up. Our Cinebench R15 multi-CPU score was 2145 on this board. 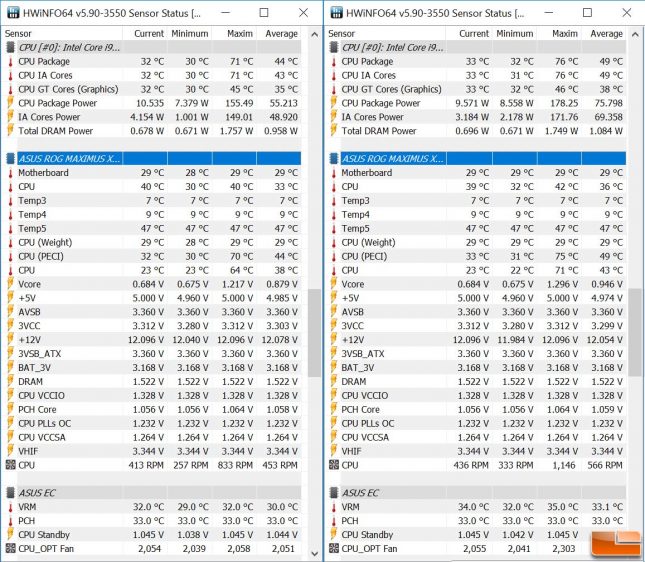 The CPU Package power for the 9900K on this board was showing 155 Watts running Cinebench with stock settings and then it went up to 178 Watts with it overclocked to 5.0GHz on all cores. Temperatures were reaching 71C in stock form with the Corsair AIO water cooler and that increased to 76C with the overclock.

We’d expect that most will be able to hit 5.0 to 5.1 GHz on the 9900K with a decent Z370 or Z390 motherboard. Most motherboard makers won’t advise overclocking a 9900K on the Z370 board though as they have beefed up the power on Z390 boards to better handle these 8-core, 16-thread processors. We’ve also talked to two motherboard makers that informed us that they will be coming out with some redesigned Z370 boards that will better support 9900K overclocking.