After using the Intel Core i9-9900K for the past week we found it to perform exactly like we expected it to. Intel finally has a mainstream 8-core, 16-thread processor to compete with AMD’s parts with the same core and thread count. The 9900K was able to out perform the AMD Ryzen 7 2700X processor in nearly every single benchmark and most importantly it was the fastest for gaming. Intel has been saying that the 9900K is the fastest gaming CPU on the market and we won’t be challenging that.

When it comes to pricing the Intel Core i9-9900K has a recommended customer price from Intel of $488 to $499 and it does not come with a CPU cooler. Right now Amazon and Newegg both have it listed for $579.99. We were going to argue that for $488 was justifiable to enthusiasts as you don’t have to mess with delidding it since Intel is using solder TIM now, but we won’t even try that at $579. The main competitor for the 9900K is the AMD Ryzen 2700X and it comes with the Wraith Prism LED CPU cooler for $305. Just two weeks ago you could purchase the 2700X on Amazon for $289, which is half the price of the currently 9900K listing. The 9900K is a great processor, but paying $579 for it seems a bit excessive. It costs 90% more than the 2700X and was usually 10-15% faster in multi-threaded performance. Intel has a much larger lead in single-threaded performance, but  Intel took the 8-core, 16-thread performance crown away from AMD, but the Ryzen 7 2700X is still the value play. 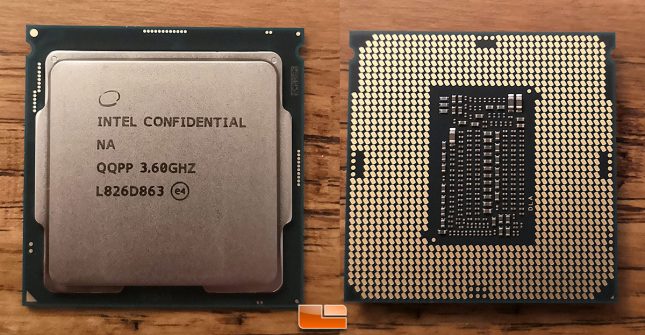 At the end of the day the Intel Core i9-9900K is a solid performing processor and it overclocked on all cores to 5GHz and beyond with very little effort. The only thing holding us back from screaming it’s praises from the roof tops is the fact that retailers are wanting $579 for it. If you are looking to spend $500 on a processor the Intel Core i9-9900K is a beast and should reward you with a desktop CPU and platform that will last many years. We highly suggest pairing the 9900K with an Intel Z390 motherboard for the best experience as the power design on all the Z390 boards have been optimized for the 9900K.

Legit Bottom Line: The Intel Core i9-9900K brings more cores, more threads, more cache, higher clock speeds and a lid with solder TIM to the desktop CPU market. The end result is the best CPU for gaming, but just be ready to pay out the nose to have it.