This makes the fourth article that Legit Reviews has written covering the Intel Core 2 Extreme QX6700 processor, so if we missed something please reference the previous articles.  The original Core 2 Extreme QX6700 Processor benchmarking article has by far more threaded applications in it, so if SMP is your thing it is highly suggested that you go back and read the previous article.

Previous Articles on Legit Reviews That Feature The QX6700: 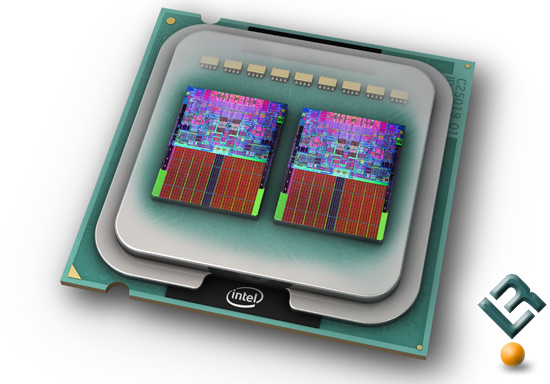 Intel has been cranking out impressive processors during 2006 and it looks like Intel has any intentions of bringing that to an end any time soon.  The first Intel quad-core processor looks to be a winner in a number of ways, but the most important is the fact that many motherboards that have the i975 Express chipset need nothing more than a BIOS update to enable quad-core support. When it comes to applications that take advantage of four cores no other desktop processor from AMD, or even Intel for that matter, come close to the performance levels that we have recorded with quad-core.

AMD will be launching their 4×4 platform later this month and after looking at the performance numbers they need that launch to go smoothly as their FX-62 processor got knocked out by Core 2 Duo back in July and now we have witnessed the Intel Core 2 Quad destroy the FX-62 WWF style.  It’s amazing how the tables can turn after years of AMD domination and it’s clear that Intel doesn’t want to let go of that lead.

The Intel Core 2 Extreme QX6700 is the processor to have if you own several applications that take advantage of four or more cores as the performance impact from having additional cores is significant. If the applications you use are not optimized for more than two cores then it’s our suggestion to save your dime as the rest of the quad-core processors from Intel will be launching in 2007 and by then more games and applications will be taking advantage of the four cores.  Not to mention the fact that Microsoft might find a way to release Windows Vista in 2007, which means many of our readers will be needing an upgrade within the next year.

The Intel Core 2 Extreme QX6700 processor is without a doubt a monster.  Having the ability to overclock more than 1GHz beyond its specifications is a clear sign that Intel has figured things out and that quad-core processors are only going to get better in the future.

Legit Bottom Line: Intel has unleased quad-core processors into the world and the Intel Core 2 Extreme Processor QX6700 is without a doubt the fastest desktop processor when it comes to applications that support four or more cores.  In short the QX6700 is Quad-Zilla!