As previously the Intel Core 2 Extreme QX6700 comes clocked at 2.66GHz and it’s performance is impressive to say the least, but that doesn’t mean you can’t get more out of it. We used the Corsair Nautilus 500 water cooler to help keep the four cores cool and then tried to overclock our Stepping 7 QX6700 processor. 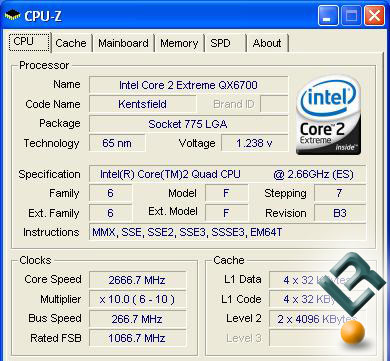 Using the Intel D975XBX2 motherboard and BIOS version 2214 we set off to overclock the processor. 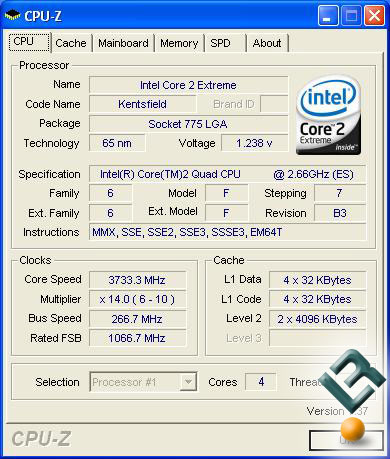 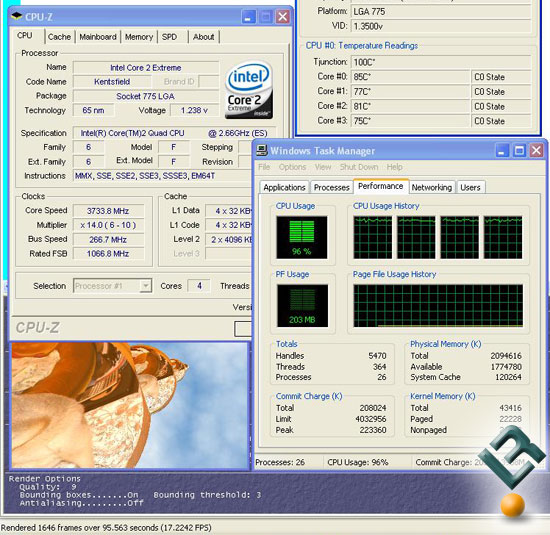 In terms of performance we ran POV-Ray and tried out some Real-Time Raytracing as the application supports four cores and the results were amazing.  The stock Intel Core 2 Extreme QX6700 scored just over 13 frames per second, which was impressive, but something that overclocking could improve.  By overclocking the processor by more than 1GHz the rendering was averaging 17 frames per second, which is a 38% performance increase over the processor settings right out of the box. We were going to push the QX6700 processor more, but if you notice the temperatures we were seeing even with water cooling we backed off and will save that for another day. Pushing the $999 Intel Core 2 Extreme beyond 3.73GHz when it was hitting 85C on some of the cores is just not sane and we were more than pleased by hitting 3.73GHz.

To do this overclock justice we graphed the above results and the overclocked quad-core is a monster. The AMD Athlon 64 FX-62 doesn’t stand a chance as quad-core procesors start to really shine when overclocked.