A Brief Look At Temps

Our press kit didn’t include the retail HSF, but we didn’t want to publish an article on Quad-Core without some temperatures. We used a heat sink that Intel sent out and ran the fan on it at 100%.  Let’s just say running this fan at 100% isn’t something you want to do all the time, but we figured it would keep the numbers fair. 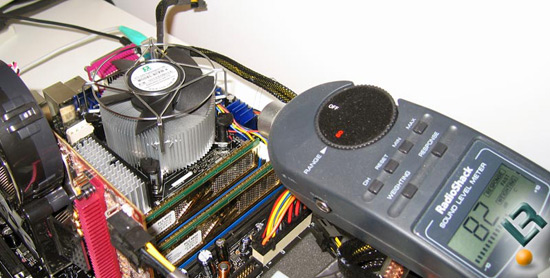 Using the Intel D975XBX2 ‘Bad Axe 2’ motherboard we ran the Intel Core 2 Extreme Processor X6800 and the Core 2 Extreme Processor QX6700 to see how the additional core impact performance.  To get the load temperatures we ran four instances of Super Pi and set the affinity for each run in Windows for the cores required for each to be at full load. Since each processor has a different number of cores we added up the temperatures and divided by the number of cores present to get a single number.

At stock frequencies and voltages we observed the that the QX6700 was roughly 7C warmer than the X6800 when under 100% load.  Not too bad, but if one of these $999 processors is in your future we highly suggest water cooling!